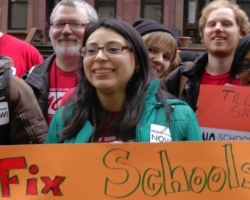 The United Federation of Teachers, the union that represents some 200,000 New York City teachers and public school workers, re-elected its president, Michael Mulgrew, and his Unity caucus to another term on Thursday, April 25.

As expected, Unity, which has been in power since the union's founding in 1960 and counts American Federation of Teachers president Randi Weingarten among its alumnae, cruised to an easy victory with some 84 percent of the vote. Mulgrew, a former high school teacher, said in a victory statement, “I’m honored that thousands of UFT members have supported my re-election. I look forward to working with them for the next three years as we continue to fight for the best for our students, their families, and the schools.”

The re-election of Mulgrew itself wasn't surprising. But given that the Chicago teachers strike made major headlines this fall, and was led by a reform caucus that upset the union leadership in 2010 elections (the Caucus of Rank and File Educators, or CORE), many eyes were on the UFT election to see if its dissident caucus, modeled on CORE, would seize control in New York.

That caucus, the Movement of Rank and File Educators (MORE), came in second, passing the other opposition group, New Action, in every category except retirees, and coming within 160 votes of Unity in the high schools. That’s an impressive showing for a reform caucus that some six months ago was unsure it was even going to put up a slate of candidates to run. “Our fear was that we had so much work to do to build up our group that running in the elections would take so much energy away from our main goal of building up a strong activist network inside the schools,” says Brian Jones, MORE's candidate for UFT secretary. “I think what we found was that there was a way to run in the elections that actually allows you to build up that network.”

Calling itself the “social justice caucus of the UFT,” MORE has critiqued the UFT's support for mayoral control of schools and what the caucus sees as the union's lack of fight over school closures, high-stakes testing and the "co-location" of charter schools within district schools. As James Cersonsky reported for Working In These Times in March, the UFT has a long tradition of dissident caucuses—none of which have been able to make a dent in Unity's leadership. MORE stepped into the space formerly occupied by the Independent Community of Educators (ICE) and Teachers for a Just Contract (TJC), and beat the percentage of the vote captured by the 2010 ICE/TJC caucus in every division. (New Action, while it challenges Unity on several issues, does not challenge Unity's candidate for president.)

One of the biggest factors in this election was the power of the retiree vote: Fifty-two percent of the ballots were cast by retired members. While MORE made the race competitive among active teachers, particularly in the high schools, the retirees returned 18,155 votes for Unity, more than ten times MORE's total. Many of the retirees live out of state, and there's no easy way for MORE to contact them.

For Jones, the increase in every category (in a year when overall turnout was down) is a victory for MORE, but the disparity between the high school vote, where they earned 40 percent, and the elementary school vote, where they won only 22 percent, is disappointing. Julie Cavanagh, MORE's candidate for president, is a longtime elementary school special education teacher.

“The positive thing is we had an elementary school person running for president and 40 percent of high school teachers voted for her,” Jones notes, pointing out that high schools are the traditional bedrock of the opposition within the union.

Moving forward from the election, the UFT faces an upcoming fight over teacher evaluations, and MORE plans to wade into the fray. The Unity leadership has said that it will accept a deal arbitrated by the governor, but MORE wants more rank-and-file involvement.

“This is probably going to be the biggest change in our working conditions in a generation," says Jones. “This is going to be a dramatic change in what it means to be a teacher. We are going to try to figure out creative ways to fight, we're not going to shut up or be quiet about that.”

For Jones and MORE, the next steps involve building influence within the union and the city. That means more local events, encouraging members to build up MORE chapters in their schools, and doing political education on local and union issues. They're not content to hope, as the current leadership does, that the next mayor of New York will be more favorably disposed toward the union than billionaire Michael Bloomberg has been. “We want to build a real thriving network of activists and organizers who are educators and other school-based workers,” says Jones.

They're also building up more democratic structures within the caucus, including an elected steering committee, to make sure that MORE represents the concerns of its members. While they still want to take over the union leadership, eventually, right now they're also interested in figuring out how to run the union in a different fashion, and that means building a movement.