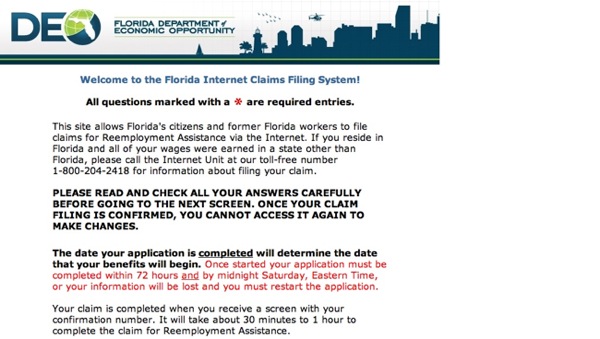 Florida's online unemployment claim form takes 30 minutes to an hour to complete, and begins with pages of warning messages.

If you think being jobless is tough, try applying for unemployment benefits. In Florida, simply filling out the form requires considerable talent and endurance. According to a recent ruling by the federal Department of Labor, the state’s new online application process is so fraught with arbitrary obstacles that it violates federal civil rights protections.

An initial determination by the Department of Labor’s Civil Rights Center, announced last week, concluded that Florida’s recently implemented web-based unemployment benefits system effectively deterred people from completing the claims process because it was needlessly burdensome and complex. The CRC’s investigation found that the state failed to provide adequate services or alternative application procedures to applicants who face special barriers, particularly people with disabilities and those with limited English proficiency.

The new process for filing for unemployment benefits, first rolled out in 2011 as part of a “modernization” program, has introduced daunting new hoops for applicants. The main quagmire is a “skills assessment” that can take as long as 45 minutes. Activists point out that forcing someone answer a long questionnaire about their job skills and abilities, simply to qualify for benefits, seems a conveniently backhanded way to arbitrarily exclude applicants.

Although advocates criticize the system as a whole as unnecessarily burdensome, the CRC complaint, brought by the Miami Workers Center, focuses on people protected by the anti-discrimination protections of the Americans with Disabilities Act and Title VI of the Civil Rights Act. Though the initial determination is not a final ruling, CRC’s investigation has found that the state has failed to meet federal standards for ensuring equal access. So the system actually reproduced the same social barriers that made it hard for these vulnerable groups to climb out of unemployment. That is, immigrants with limited language ability, who are often relegated to the worst-paid, least stable jobs, and people with disabilities, who suffer extraordinarily high unemployment rates, may have been arbitrarily denied the meager benefits payments that might be their main financial fallback as they struggle to find work.

The supposed purpose of the state’s online skills assessment is to better assess the needs of the applicant. But that information is extracted at a high price. As a prerequisite for qualifying for unemployment payments, the CRC concludes, the skills review “tends to screen out persons with disabilities from fully and equally enjoying the benefits of [Florida’s unemployment compensation] program."

Spending nearly an hour fumbling with a web application would be frustrating for anyone. But if you’re poor, jobless and have to rely on a local library for Internet access, or suffer from a repetitive stress injury that makes typing unbearable, or have trouble reading English, it may be virtually impossible to surmount the state’s bureaucratic firewall. Under the previous, simpler application system, applicants could file by phone or fill out a paper form. According to  National Employment Law Project (NELP), phone applications previously accounted for some 40 percent of filings.

George Wentworth, an attorney with the NELP—which has worked with Florida Legal Services to petition the Labor Department about flaws in Florida's application process—says that eligibility for unemployment should be based on three simple things: a workers’ unemployed status, whether she’s actively seeking work and whether she’s worked enough in the past to meet the basic requirements. “That should be all that's necessary to get in the front door of the system,” Wentworth says, “and what Florida has done is to erect a wall, rather than a door."

According to the CRC's initial findings, despite federal civil rights laws that entitle protected groups to alternative accommodations, the state has failed to provide needed services. NELP’s analysis of the ruling outlined several examples of discriminatory barriers:

Test callers encountered excessive hold times or hassles when they needed language assistance, reported the CRC. One Punjabi-speaking caller was reportedly advised by the agent, "I don't speak jibberish so call when you know English.”

"People can draw their own conclusions. But this was implemented in a very strict and severe manner that ultimately drove thousands and thousands of people away from benefits,” Wentworth says.

In addition to the CRC complaint, NELP and Florida Legal Services have filed a broader complaint with the Secretary of Labor, charging that Florida’s  system violates the Social Security Act’s mandate that state administrative methods ensure reasonable access and timely payment of benefits. But even if Florida eventually removes the discriminatory barriers, those changes would come too late for potentially thousands of workers who appealed to their state for help through tough times last year, but ended up getting robbed by the bureaucracy of precious time and money.