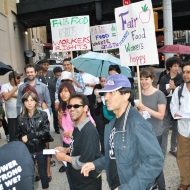 On May 1, International Worker’s Day, a half circle of Restaurant Opportunities Center (ROC) members and supporters surrounded the entrance to Fat Salmon, a high-end sushi restaurant in Philadelphia. They watched as Diana A. (she asked her last name not be used) walked into the restaurant to deliver a prepared statement denouncing, among other things, what some workers have described as an intricate system for stealing their tips.

Diana and two other workers have been “on strike” since last April 15, when they confronted the restaurant’s owner, Jack Yoo, with a similar statement listing their grievances. The May Day document included the names of four other employees who are still working but signed on in support. (Fat Salmon workers are not unionized, but the National Labor Relations Act protects any worker, union or not, who “engage in…concerted activities for the purpose of… mutual aid or protection.”)

Before Diana entered the restaurant, the small crowd listened as another striking employee read from the statement. “While Fat Salmon excels in its food, it falls short in its treatment of the people who prepare and serve the food,” said Claire T., who says that after working there for a year and a half, she has only recently began receiving 100 percent of tips she earned. “We the workers of Fat Salmon have suffered numerous legal violations and affronts to our dignity.”

The workers' chief complaint is what they say is a complex system for assessing payment, which includes docking a certain percentages of a worker’s tips based on menu test scores. While it is common practice to test servers on a restaurant’s offerings, Fat Salmon workers describe an unusual four-tiered system of pay penalties: Servers who pass a test on the beverage offerings may take home 70 percent of their tips, those who pass a short menu test take home 80 percent, those who pass a long menu test receive 90 percent and, finally, a lengthy and complex full menu test is required to keep 100 percent. Yoo allegedly allows the tests to be taken only at periodic intervals, denying workers the opportunity to quickly level up. According to the workers, this means that many labor for months or years without receiving all of the money left by customers for their service. Diana says she worked full time for three months before passing all four tests and estimates she lost between $600 and $1,000.

Other demands include a “workplace free of sexual harassment,” overtime pay and paid sick leave (a battle ROC, a national workers' advocacy group, has been waging on a city-wide level). But the wage issues seem to be the chief complaint. As the ROC demonstrators clustered around Fat Salmon, pedestrians stopped on the narrow pavement and peered at the signs reading “Stop Wage Theft” and “Restaurant workers deserve 100% of their tips.” One passerby airily suggested the workers just find another job, but another one old man, after considering the signs, said, “I’ll never eat here again,” as he shuffled away.

Neither reaction is quite what the striking workers are going for. “I don’t want to disrupt things too much because I have a lot of friends who still work there,” says Diana. “We don’t want people to stop going to Fat Salmon, but talk to the owner and tell them you want your server getting 100 percent of their tips.

But nor do Diana and her co-workers want to quit and allow conditions at the restaurant to continue unabated. She describes the environment in Fat Salmon when she delivered the May Day communiqué as “a little tense, but not hostile” and says lawyers for the both sides will be meeting soon. ROC says that employees who are still working have started receiving all their tips, presumably due to media attention.

Wage theft—the withholding of owed wages—is a pervasive problem across the nation, and many states and municipalities have passed laws to combat the practice by upping penalties or devoting resources to pursuing offenders. A new law passed on Thursday before the Philadelphia City Council, meant to bust tax evaders, could do both. Philadelphia levies a (regressive) wage tax on everyone who works in the city. That means that when employers rob wages from employees, they also rob the city of its wage taxes. The law will allow anyone who suspects violations of wage or net profits tax to file a complaint with the City Solicitor's office. The city would then be required to investigate and if the accused is guilty, they must pay double the amount owed, and triple if they refuse to cooperate. As an incentive for whistleblowers, between 15 and 30 percent of the fine goes to the person who brought the issue to the attention of the city.

"I supported amendments to these bills in large part because of their potential to help fight abusive employment practices,” says Councilwoman Maria Quiñones-Sanchez in an email message. “Unfortunately, workers who are not paid the full wages or tips they are due all too often have little recourse for enforcement. As amended, these bills provide a clear complaint process and a potential financial incentive for wronged workers to work with the Department of Revenue to make sure employers are paying what they owe."

It is unclear how useful the bill, which still awaits the mayor's signature, will be to restaurant workers, as many industry employees underreport tips, and the incentives to do so are particularly strong in Philadelphia because of the city’s wage tax.

"Its application in the restaurant industry is likely to vary widely," says Sheila Maddali, research and policy coordinator for ROC. "But between City Council's recognition of the issue and the Fat Salmon workers' courage in demanding justice, wage theft in Philadelphia can no longer be ignored.”