As Death Toll in Bangladesh Collapse Climbs Past 1,000, Another Factory Fire Claims 8 Lives 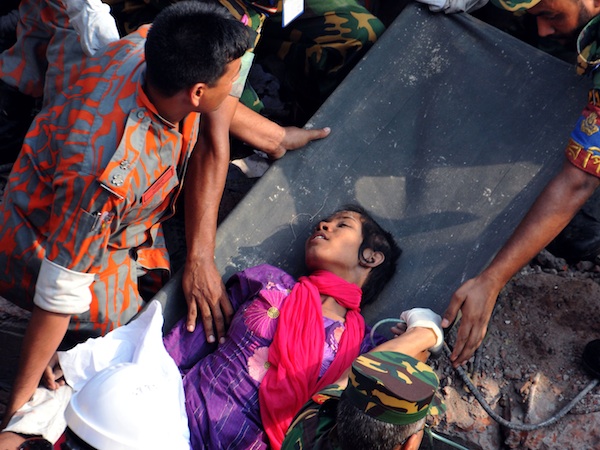 On May 10, 2013, garment worker Reshma was rescued from the rubble, 17 days after the collapse of a Bangladeshi factory. But more than 1,000 workers were not so lucky. (STRDEL/AFP/Getty Images)

Bodies continue to pile up at Rana Plaza, once a powerhouse of Bangladesh’s garment industry, where more than 1,000 corpses have been unearthed since a factory collapse two weeks ago (and today, another survivor was discovered). Meanwhile, yet another disaster, a May 8 fire at the Tung Hai Sweater Factory in Dhaka’s Mirpur district, claimed eight additional lives. In total, the death toll since 2005 from fires and other preventable incidents at factories in Bangladesh now exceeds 1,500, according to garment-industry watchdogs—including more than 110 killed by a fire at the Wal-Mart-affiliated Tazreen factory in November.

In a strange twist, the casualties in the latest fire appear not to have been ordinary workers. According to a New York Times summary of Bangladesh news reports, “The victims included the police deputy inspector general, Z. M. Monzur Morshed, as well as the factory’s managing director, Mahbubur Rahman. Mr. Rahman was also a director of the country’s most powerful industry trade group, the Bangladesh Garment Manufacturers and Exporters Association.” The fact that prominent industrialists were meeting with a police official in the factory after hours exposes the tight nexus between commerce and the state that has drawn public scrutiny in the wake of Rana. The powerful businessman behind the huge factory complex, Sohel Rana, was notorious for exploiting cozy political connections to bolster his manufacturing empire.

Tragically, it took the scale of the carnage at Rana Plaza to shine light on a barely regulated industry known for treating its Global South workforce—which profits from vast numbers of rural migrant women workers with few other job options—as disposable tools. Lower-grade accidents that attract less media attention have also inflicted day-to-day harm. According to the International Business Times, since the Tazreen fire, "40 more factory incidents have led to the deaths of 10 people, with 650 workers injured." In a country where low-wage workers often toil to support families on less than $40 per month, work-related injuries can prove financially fatal.

Finally, in the wake of the Rana Plaza collapse, a global consensus seems to be forming that the trail of blame can be traced upward through the production chain, from the shop floor to the boardrooms of the global retail giants whose labels have turned up in the wreckage. The corporations that have been implicated so far, including Western giants Wal-Mart, Primark, Benetton, GAP and H&M, have more power than any other international stakeholder to reform the industry. But this will only happen if they're pressured into making fundamental changes to an intrinsically exploitative structure. These include not just paying the immediate cost of safety remediations, but also strengthening workplace protections, ensuring transparent and objective factory audits, and enabling workers to organize unions, which have faced brutal suppression as the politically influential export sector has boomed.

There is just such a program already in place, waiting to be implemented. Activist groups have for months been pushing brands to sign onto the Bangladesh Fire and Building Safety Agreement, which would institute major reforms in the safety monitoring system and make enforcement of the protocol legally binding in the retailers' home countries.

So far, only two companies have signed on—PVH/Tommy Hilfiger and the Germany-based Tchibo—and four signatories are needed for the accord to take effect. More recently a labor coalition including the IndustriALL Global Union, Clean Clothes Campaign and Workers’ Rights Consortium, have been working with multinationals that source from Bangladesh to develop a factory safety initiative, facilitated through consultations hosted by the German Agency for Development Cooperation (GIZ). The coalition has set a May 15 deadline for companies to commit to the plan.

Nonetheless, Liana Foxvog of the leading anti-sweatshop group International Labor Rights Forum, in an email to In These Times, expressed some skepticism that the GIZ initiative will include major reforms to working conditions:

Our hope is that the [GIZ] factory safety program ... [will] have same core components as the safety agreement that PVH and Tchibo have adopted--independent fire and building safety inspections, transparency of audit results, union access to give safety and rights trainings in factories, sufficient pricing from brands for mandatory safety repairs and renovations, and worker representation in program oversight and implementation. But we’re not holding our breath.

The hundreds of traumatized workers and their families don’t seem to be holding their breath, either--they are gasping for air as the industry slowly smothers them in smoke, flames and crumbled concrete. A tiny spark of hope emerged at the Rana site on Friday when a woman was found alive in the rubble. Her rescue was hailed by the media as a “miracle.” Still, with so many tragedies eclipsing this singular story of survival, what the workers need now are not more miracles, but rather, just recompense from the labels that have become the global fashion industry’s badges of sin.