Two Wins for Bangladesh Garment Workers, But The Fight Isn’t Over 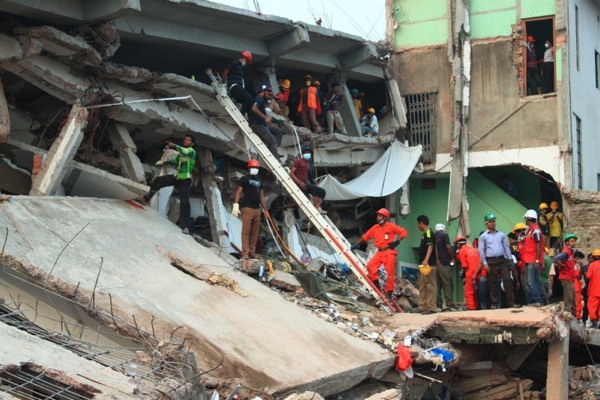 Workers clear aside rubble at the site of the Rana Plaza collapse. (Wikimedia Commons)

With a death toll of 1,127, the April 24 collapse of the Rana Plaza factory building in Bangladesh has earned the shameful distinction of being the sixth-worst worst industrial disaster in history.

There’s plenty of shame to go around—and not just for the building owner and factory operators who ignored clear warnings of danger. High on the dishonor roll are the multinational apparel companies who subcontract work to thousands of local Bangladeshi factories crammed into similar deathtraps. The government of Bangladesh, dominated by representatives of the nation’s largest industry, textiles, shares blame for its fecklessness and corruption.

U.S. government officials and members of Congress are also at fault. They have failed to insist on safe standards for production of goods in Bangladesh (four-fifths of whose garment output goes to the U.S. and the European Union) and continued to grant it trade preferences.

But in a glimmer of hope, the outcry over the scale of the carnage in Rana Plaza has begun to spur some long-overdue reforms.

After relentless international media coverage and protests and strikes in and around Dhaka, the Bangladeshi government announced yesterday that it was convening a panel to raise the minimum wage in the garment industry, currently the lowest in the world (around $38 a month).

And today, the government said it would make unionization less difficult in the garment sector. Currently, for a union to be certified, it must win support from 30 percent of workers, and the government gives the list of workers who sign up to the employer for verification. At that point, employers often intimidate or fire supporters to reduce union support. Bangladesh's minister of textiles says that in the future, bosses will not see the list of signatories.

But the truth is that even government action and unionization are likely to be inadequate on their own. Pressure for cheaper production from the multinational corporations can overwhelm or corrupt governments and unions. That’s why another development spurred by the factory collapse is perhaps the most promising. Seven companies have acceded to calls by Bangladeshi garment-worker associations for a binding and enforceable fire and safety agreement.

Two initial signatories to the safety plan, PVH—parent of Calvin Klein and Tommy Hilfiger brands—and the German clothing company Tchibo, were joined today by five more big-brand companies: H&M, the Swedish firm that is the largest buyer of Bangladesh apparel; Inditex, parent of the Spain-based international retailer Zara; Primark, a UK firm that sourced products from one of the five Rana Plaza factories; the big British super-store chain Tesco; and the Dutch clothing company C&A. Now that it has passed the required four-signature threshold, the plan will likely go into effect.

The global union federations UNI and IndustriALL played a major role in bringing the primarily European companies on board. Workers at most of these companies in their home countries are unionized, and by taking advantage of relationships with such employees’ unions, the global federations have more clout than they do with typically non-union U.S. companies. GAP, Wal-Mart, Sears and JC Penney, for instance, have resisted signing the fire safety agreement, claiming it would be too expensive and would expose them to lawsuits.

This means that pressure on U.S. corporations from both citizens and consumers remains critical.

And for those who doubt that such pressure can be effective, a recent victory in Indonesia shows that U.S. crusades for worker justice in poor countries do work.

Just a day before the Rana Plaza collapse, United Students Against Sweatshops announced victory in a two-year campaign to force sportswear giant Adidas to pay legally mandated severance compensation to 2,700 Indonesian workers. The workers lost their jobs in 2010 when the Korean owner of PT Kizone, a contractor in Indonesia manufacturing shoes for Adidas, fled the country and abandoned his employees.

Labeling the brand “Badidas” for its refusal to pay the severance owed, USAS built the largest collegiate boycott of a major sportswear company in the organization’s 15-year history. By the time negotiators reached a settlement of the dispute that satisfied the workers, 17 colleges and universities had ended their contracts for producing college logo products with Adidas, and the University of Wisconsin was pursuing legal action against Adidas for allegedly breaking its anti-sweatshop contract with the university.

The victory was not only important as one of the largest global “wage theft” restorations, presumably—since the exact terms remain secret—providing close to the $3.4 million owed to 2,700 workers from all the major contracting firms (Adidas, Nike and the Dallas Cowboys).

More important, this campaign took a giant step towards establishing that multinationals must pay the price when their contractors evade legal obligations.

That precedent was first set in 2010, when USAS pressured Nike to assume responsibility for severance pay owed to 1,400 Honduran workers at a contractor that closed shop and abandoned them. Nike eventually paid a share of the severance obligations to the Indonesian workers, even as the number two company in sportswear, Adidas, fought on against USAS.

Now that Adidas, too, has taken responsibility, “we see this victory as building on the Nike precedent in the industry and setting a new norm in student apparel,” says Garrett Strain, USAS campaign coordinator.

If that norm—of deep-pocketed major corporations accepting responsibility for the rights and well-being of workers at their overseas contractors—wins out, the anti-sweatshop campaign will have established a moral principle internationally that is rarely followed or enforced in the United States.

There are sound reasons why companies like Adidas and Nike should pay up in a case like this. Although no one knows for sure why the Korean owner fled, he may have been pressured by the big brands to produce at such a low price that he would lose money, so he decided to take what he could and get out, according to Scott Nova, executive director of the Worker Rights Consortium. WRC is an independent investigative operation set up by universities who signed on to the USAS-backed code against sweatshop production of collegiate gear.

The big brands “are directly responsible,” Nova said. “A responsible company would set aside a fund for severance pay, but not doing so takes something out of labor costs. The brands and retailers know the cost of making a garment, but they’re happy to accept the lowest price. They know what they’re paying.”

Nova sees the big Indonesian victory as part of a “strategic moment that creates openings for much broader change, but at the same time we know this is an enormously powerful and ruthless industry. No one should have any illusions that the work is getting easier.”

Thousands of Bangladeshi workers—the injured, families of the dead, workers in their own dangerous sweatshops—have no such illusions. While it will not console them in their grief, the victory wrought by U.S. students in pinning responsibility on America’s big-brand companies could help pave the way to better protections for them as well.