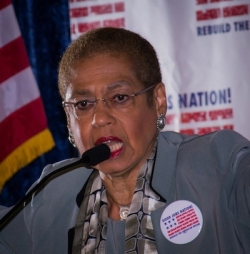 “I work at Quick Pita in the food court of the Ronald Reagan Building. I work nearly 12 hours every day serving lunch to the thousands of people who work in the building. But I am not here to tell you how hard I work. I am here to tell you that my employer does not follow the law,” testified Antonio Vanegas before a hearing of the Congressional Progressive Caucus yesterday.

Vanegas is one of 100,000 low-wage workers in the Washington, DC area, according to Good Jobs Nation, many of whom are employed by federal contractors or in federally owned buildings like Union Station, the Smithsonian National Air and Space Museum, and the Ronald Reagan Building. He and about 100 of his colleagues went on a one-day strike yesterday in order to draw attention to their low pay. Despite provisions in the federal Service Contract Act stating that federal contract workers like Antonio Vanegas should make at least the local prevailing wage, up until a few weeks ago Vanegas was making $6.50 an hour–less than the federal minimum wage of $7.25 and well below the D.C. minimum wage of $8.25. Additionally, Vanegas works 60 hours a week, but claims he receives no overtime pay for hours he works past 40, in violation of the Federal Labor Standards Act.

“There are many workers in the food court who are like me, who don’t make enough to pay the rent, put food on our tables and take care of our families,” said Vanegas in his testimony. “That’s why I’m here and why so many workers like me are on strike today. We want the federal government to be a good landlord and rent prime retail space to employers who follow the law. We want the government to lead by example and guarantee that all workers who do work on behalf of the federal government earn a legal and living wage.”

Several members of Congress told Working In These Times they were shocked to hear the testimony of workers like Vanegas at yesterday’s hearing.

“I think that people should be paid a wage that enables them to have a good life,” said House Democratic Leader Nancy Pelosi. “We go through this in the ballpark, we go through this in the federal government. I think we should all do something about this. I think we have to call attention to it because, like I said [in the hearing], I think there is a certain immorality to the low wages people are receiving and it’s just not fair.”

Indeed, Vanegas’ case is not an isolated incident of federal contractors employing low-wage workers. A new study by the labor-funded think tank Demos estimates that through federal contracts, healthcare spending and loans and grants to the private sector, the federal government indirectly employs nearly 2 million "low-wage" workers, defined as those making less than $12 an hour or $24,000 a year. The study concluded that the federal government employs more low-wage workers than Wal-Mart and McDonalds combined.

Nor would the overtime wage theft alleged by Vanegas be an isolated case of federal contractors violating labor law. A 2010 study by the Government Accountability Office found that $6 billion in federal contracts were issued the previous year to employers who had already been cited for violating federal labor law.

“If you worked directly in these same federal buildings in my district–in the Ronald Reagan Building, in the Smithsonian–if you worked directly for those agencies, you would be paid a decent wage,” Congresswoman Eleanor Holmes Norton (D-D.C.) told the assembled group of 100 workers and their supporters during the hearing. “But the federal government has outsourced your labor [to contractors] and is trying to distance itself from responsibility for lower wages and for the fact that most of you have no benefits whatsoever. Now this is not only inhumane, but for the federal government it is particularly dumb, because many of you will require what we call ‘benefits for the working poor’ because your employer has failed to pay a decent wage with benefits. So who picks up the tab? The federal government, of course.”

Currently, the Service Contract Act requires the Department of Labor to set minimum wages for workers employed by government contractors in certain low-wage positions, such as janitors, food service workers and security guards (although workers report that those rules are not always followed). But workers like Antonio Vanegas, who work in concession space leased in federal buildings or museums, are not even covered by the Service Contract Act. Norton argues that these positions should be covered by the Service Contract Act, particularly in museums, since vendors get "valued access to the captive customer base of tourists who come to federal sites in the nation's Capitol ready to spend money." The McDonald's at the Smithsonian National Air & Space Museum has the capacity to serve up to 15,000 people each day at one of the world’s busiest museums.

Demos Senior Policy Analyst Amy Traub, co-author of the recent report, argues that even the current wage rates set by the Service Contract Act are too low and do not reflect what are the national mean wages for the job categories in which workers are employed. At the hearing, advocates called on President Obama to issue an executive order that raise the act’s minimums and expand the act to cover more workers.

However, Norton worries that an executive order could get held up for over a year in legal wrangling. She says there are steps the president can take right now to ensure federal contract employees are paid better.

“In order to get the benefit of being sheltered in iconic structures like Union Station or like the Air and Space Museum, your employers had to compete with others who wanted to provide the same service for the federal government,” Norton told the assembled group of workers at the hearing yesterday. Norton says that Obama could change the system immediately by adjusting the point system used to award federal contracts, giving extra points to companies that pay better wages.

Top Congressional leaders say they will push this issue with President Obama.

“I am sure we will be talking about it [with the White House],” House Democratic Whip Steny Hoyer (D-Md.) told Working In These Times. “We are talking about a lot of things and I am sure that is one of them.”

The White House did not response to a request for comment on whether it will issue an executive order. Advocates have been urging the Obama administration since 2009 to issue executive orders that would ensure better wages for workers employed by federal contractors, but the federal government has failed to act.

Regardless, union organizers are confident that through organizing they still might be able to win real changes for workers. Paco Fabian, a spokesperson for the labor federation Change to Win, says that Change to Win plans to continue organizing federal contract employees in DC and other cities.

Already, the organizing has seen some results. After Change to Win started talking to workers like Antonio Vanegas at Quick Pita in the Ronald Reagan Building a month ago, the boss got nervous that attention was being paid to the low wages, according to Vanegas. In response, Vanegas and his co-workers got a raise, to $9 an hour.