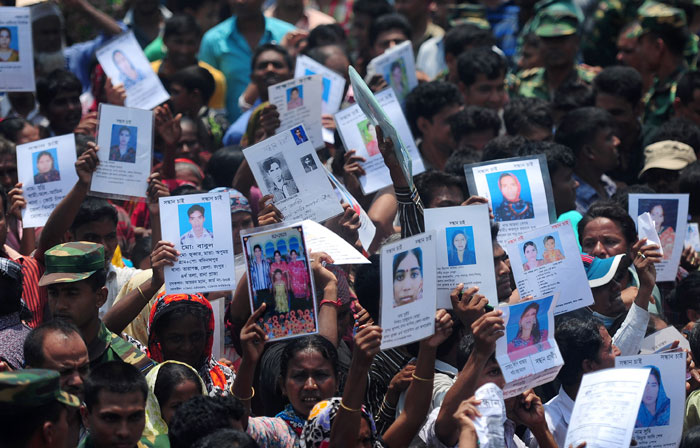 Bangladeshi family members hold up portraits of missing relatives from the Rana Plaza building collapse during a protest on May 14, 2013, the day the army stopped searching for survivors.   (Munir Uz Zaman / Stringer / AFP / Getty Images)

It’s been about a month since the Rana Plaza factory complex crumbled into a cement grave for more than 1,100 Bangladeshi workers. Now, the dust has settled, but the anger still burns as workers await compensation and accountability from a manufacturing system that runs on industrial “death traps.”

But last week, at a meeting of the International Labour Organization, dozens of major global clothing brands—none based in the United States—announced they had signed onto a broad safety accord designed to be more comprehensive than previous corporate codes of conduct. The initiative, led by labor rights groups and unions, is just the beginning of a long road to labor justice, but could move one of the world's deadliest manufacturing sectors toward meaningful international accountability.

The linchpin of the Bangladesh Accord on Fire and Building Safety, which now has the support of 40 companies, such as H&M and Benetton, representing some 1000 factories, is a legally binding commitment to hold multinationals responsible for safety violations. Corporations must also proactively safeguard workers’ physical and economic security by assisting suppliers in financing and implementing safety upgrades. The plan also provides some job protections for workers affected by safety remediations, when, for instance, a factory must shut down for renovations. Workers and advocacy groups would also have a role in administering the inspection and renovation procedures.

UNI Global Union, a Geneva-based international labor coalition, announced last week, "The aim is to have safety inspectors on the ground as quickly as possible in order to begin to fix the most urgent problems.” With an unprecedented number of companies on board, UNI says that going forward, “workers everywhere will now seek to expand this historic accord to other countries and to other industrial sectors.”

But in a sector rife with unsafe, poorly regulated buildings, many of the most dangerous factories may remain out of reach because two major American brands, Gap and Wal-Mart, are holding out, apparently wary of the possibility of legal or financial liability for supply-chain safety problems. Wal-Mart has sought to preempt the pending safety accord by announcing its own safety plan, which activists dismiss as another toothless public-relations measure.

So-called “corporate social responsibility” initiatives have long been criticized by activists as corruption-prone smokescreens used by corporations to “voluntarily” police (and rubber stamp) conditions in their own supply chains, without real, legal accountability.

This American exceptionalism is nothing new. Last year, in the wake of another deadly factory fire at Tazreen, a Wal-Mart affiliated supplier, the New York Times reported the company had balked at a similar proposal for safety improvements led by the Clean Clothes Campaign in 2011.

But the Rana disaster was so lethal that activists hope this time, Gap and Wal-Mart will capitulate to public pressure. “The accord enjoys very broad support and there is no legitimate reason for Gap not to join,” says Liana Foxvog of the International Labor Rights Forum, one of the groups campaigning for the accord.

If Gap and Wal-Mart reject the accord, they could undermine the integrity of the entire system. Garrett Brown, coordinator of the Maquiladora Health & Safety Support Network, tells Working In These Times via email that the value of the pending agreement lies in the collective buy-in of major industry players:

No agreement, including this one, can overcome the dominant current business model of global supply chains—the “race to the bottom”—but it attempts to put a floor underneath what is "acceptable practice” and with enough major players so there is a “level playing field” for the signatories … It will be important that the U.S. brands also sign on soon so that there is not a “unlevel playing field” that benefits those who do not sign on.

Ultimately, ceding structural power to workers poses a greater threat to Wal-Mart’s industrial hierarchy than signing onto a safety contract. By giving workers more leverage in factory oversight, the door could be cracked open for more union rights, collective bargaining or strikes. Since companies have profited for so long off a society of poverty wages and suppression of unions, Foxvog says:

Gap and Walmart may be worried that by joining the accord they would set a precedent that would empower workers not only in Bangladesh but also in other countries as well to demand dignity and respect for their basic rights. The accord is a shift from voluntary self-regulation to a binding labor-management agreement.

She adds that the agreement would open prospects for "union access to factories and union involvement in forming factory-level health and safety committees."

Yet with or without the safety agreement, garment workers are mobilizing to demand justice from the nation’s biggest export industry, lashing out at corporations that have paid for short-term economic “development” with the bodies of the poor.

Thousands of workers have taken to the streets in recent weeks, braving a brutally repressive police force that is known for attacking labor activists. On May 20, about 20,000 workers in the Shulia district, a garment-manufacturing hub, rallied to demand a raise in monthly pay to about $100 per month (the current wage floor is set at less than $40 monthly).

And just as the ink was drying on the safety accord, workers shut down production at 20 factories last week and temporarily blockaded the Dhaka-Mymensingh Highway. At least 50 were injured in clashes with police.

Meanwhile, the Rana disaster’s victims and their families are struggling to cope not only with grief, but with the loss of crucial, if abysmally low, wages. People who suffered devastating injuries and lost limbs from the collapse now face even deeper poverty.

According to AFP and Global Post, workers complain that the payments that have trickled in have been calculated according to distorted estimates, such as undercounting overtime hours. Shefali Akter, 25, told AFP she had lost two sisters at Rana and had suffered injury, but was denied adequate recompense:

"They are not taking into account the three years' work that I did in another factory in the same building," she said while showing an X-ray of her bruised skull to an AFP correspondent.

"After spending the money on my medicine, I don't have enough money to feed myself and my family properly," said the married mother of two.

In the end, Akter decided to reject the compensation she had been offered. Perhaps refusing an insulting payout is the strongest challenge to the callousness of multinational companies that workers can raise. In an industry that ruthlessly devalues poor people's lives to chase ever-higher profits, the most valuable thing workers have left to fight for is their dignity.