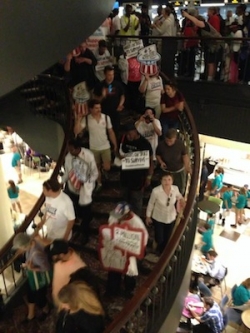 After Quick Pita worker Antonio Vanegas joined a May 21 strike by low-wage federal contract workers, pictured here, he was arrested by Federal Protective Services police entering his place of work and held by ICE for three days.   (Photo from Good Jobs Nation)

Last week, Working In These Times featured the story of Antonio Vanegas, one of 200 federal contract workers who went on strike in Washington, D.C. last week protesting low wages. Vanegas testified to the Congressional Progressive Caucus that he makes $6.50 an hour, less than the legal minimum wage, as a food court employee in the federal Ronald Reagan building, and has been denied overtime pay despite working 60 hours a week.

Now, less than a week after testifying in front of top members of Congress, Vanegas is facing deportation. From a press release by Presente.org:

Presente.org has issued a petition demanding that the Obama Administration halt the deportation of Antonio Venegas, a federal contract worker fired and placed into deportation proceedings for participating in a strike last Tuesday. ...

Following the walkout, Vanegas and nine of his coworkers were fired but were reinstated after the community demanded action. Over the weekend, he was arrested by Federal Protective Services police as he entered the building where he had worked for three years, and after three days in ICE detention was released with instructions to report for further deportation proceedings. Vanegas is now effectively excluded from his place of work.

...In addition to being extremely unfair retaliation against a worker demanding his rights, Vanegas’ arrest and exclusion  violates Department of Homeland’s Security’ rules prohibiting it from interfering in labor disputes.

Justin Bieber's image is being used by foes of a minimum wage increase. From the Huffington Post:

Late last week, the Biebs' likeness turned up on a Los Angeles billboard tying minimum wage hikes to the nation's high teen unemployment rate. In the advertisement, a dejected Bieber stares out at passersby near the corner of W. Pico Blvd. and Hi Point St. in Central Los Angeles.

"Why is Justin Bieber so sad?" the billboard asks. "Could it be because 24% of teens who want a job can't find one? Teen unemployment makes us all sad. Unfortunately, raising the minimum wage will only make things worse."

The billboard was sponsored by a D.C.-based industry group called the Employment Policies Institute, which advocates against minimum wage hikes on the state, federal and local levels. Although the group does not disclose its funding, it was launched by the well-known Washington lobbyist Rick Berman, whose industry-backed groups have stumped on behalf of restaurant, alcohol and tobacco companies.

The new Fox reality TV show, “Does Someone Have to Go?” pits workers against workers, giving employees the power to decide who gets fired and who gets demoted. As New York Times writer Jon Caramanica points out, this is emblematic of how workers are often unfairly blamed for the woes of company:

A reality show set at various small companies, it’s part docuseries, part gauche game show. At each office, the bosses cede authority to the workers, who decide whether to punish their colleagues with pay cuts, demotions or firings.

It bears repeating: This is a show in which people might lose their jobs.

For companies, this is a victory, reinforcing the idea that what’s wrong with the American workplace is the workers. The problems discussed aren’t about the structure of the company, or the state of its chosen industry and market, or the economy as a whole. Employees are the enemy here, bolstering the fanciful and generally wrong idea that one bad apple spoils the lot.

… This is reality television’s “Lord of the Flies” or “The Hunger Games” or “The Running Man.” On next week’s episode, people will be shown pleading for their jobs — their jobs. The preview clips alone are heart-rending and barely ethical. It is impossible not to be invested in the outcome, and not to feel that the people whose livelihoods are on the line are pawns not just of their bosses but also of the show’s producers and the network, all of whom face far less severe stakes.

The Major League Baseball Players’ Union is lending its support to 500 textile workers at VF Majestic plant in Pennsylvania launched in a tight contract struggle. From the Leigh Valley Morning Call:

Union members' existing policy costs $65 a month for individuals and $250 a month for family coverage, and includes a deductible of $650 per person for no more than three people. VF Majestic wants to double the premiums without changing the level of coverage, the union says.

The union has offered to put the workers on its own plan, which would provide similar benefits at roughly the same cost to VF Majestic as the company's current health plan, Melman said, but the company has insisted on doubling employee premiums.

The textile workers have won the backing of the men they clothe, some of whom earn more in a day than the workers make in a year at wages that average $11 an hour.

The Major League Baseball Players Association weighed in last week with what might be considered the labor equivalent of chin music to VF Majestic, penning a letter of support for the textile workers at the Palmer Township plant.

A new investigation by the Associated Press reveals that many people are completely unaware of the proximity of plants like West Texas Chemical and Fertilizer that store dangerous chemicals. From the AP:

Fears of terrorism have made it harder than ever for homeowners to find out what dangerous chemicals are hidden nearby. Poor communication can also keep rescue workers in the dark about the risks they face.

And some records are so shoddy that rescuers could not rely on them to help save lives.

That reality is reflected in a monthlong effort by The Associated Press to compile public records on hazardous chemicals stored across America. Drawing upon data from 28 states, the AP found more than 120 facilities within a potentially devastating blast zone of schoolchildren, the elderly and the infirm.

Congressman George Miller (D-CA) is in Bangladesh this week, threatening tough reviews of the country's duty-free trade status with the United States. From the Dhaka Tribune:

Miller ruled out the possibility of increasing the country’s duty free access to the US until some changes are made. “In the middle of these tragedies you want to start discussing reducing duties?”

Duty free access currently does not cover RMG in the US, unlike in the EU. The Congressman also expressed widely held frustration over the government’s handling of the murder of Aminul Islam, the labour organiser who was found dead last year.