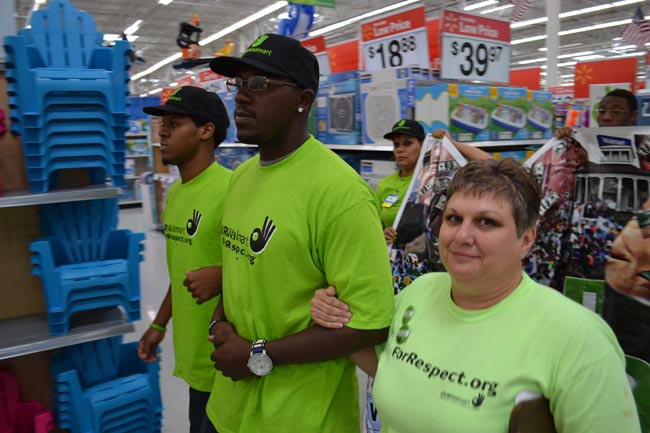 When Walmart holds its annual meeting in Bentonville, Ark., on Friday, Janet Sparks will deliver two important messages. First, as a small shareholder, she will introduce a resolution to reform executive compensation at the world’s largest retailer. More significantly, however, as a worker at the company’s store in the small town of Baker, La., Sparks will also be telling Walmart a thing or two through her actions: Sparks, a national leader of OUR Walmart—a two-year old organization of the company’s retail “associates”—is one of more than 100 Walmart workers from across the country who went on strike May 28, and who have traveled to Bentonville to make their voices heard.

Inspired by the Freedom Riders of the civil rights movement, the workers in this first prolonged Walmart work stoppage traveled by bus from all corners of the country to Bentonville, where Walmart’s headquarters are located. Along the path of their “Ride for Respect,” they held protest rallies at Walmart stores against the company’s behavior towards its employees, and they picked up more strikers.

The striking workers hope to persuade corporate executives to take two simple steps: First, they want the executives to sit down and talk with them about making Walmart a better employer. Though Sparks acknowledges the group may not get everything it wants, OUR Walmart’s goals in such talks would include providing more full-time work that pays at least $25,000 a year. Second, they want Walmart to stop punishing and firing workers who speak out regarding problems with work at Walmart.

After arriving in Bentonville last weekend, the striking workers began a weeklong series of planned demonstrations and meetings with participation of public figures like United Farm Workers co-founder Dolores Huerta, and leaders of support groups like Interfaith Worker Justice, the National Organization for Women and Jobs With Justice. In many actions, OUR Walmart strikers were joined by representatives of Walmart warehouse workers and members of unions representing Walmart workers from Brazil and Chile. In a press conference and speech to demonstrators outside corporate headquarters on Wednesday, Kalpona Akter, executive director of the Bangladeshi Center for Worker Solidarity, criticized Walmart for a leading a group of retailers and apparel brands—largely based in the U.S.— in resisting a legally binding plan proposed by Akter’s group and international labor organizations for enforcement of factory safety conditions and investment to bring thousands of dangerous factories up to Bangladeshi standards.

Following a series of protests and strikes last year—at a Walmart supplier in Louisiana, warehouses in California and Illinois, and retail stores nationwide—that culminated in a one-day strike of more than 500 retail associates on the day after Thanksgiving, OUR Walmart membership grew rapidly, organizers say. Since the post-Thanksgiving strike, the number of stores involved in OUR Walmart has jumped by 25 percent, to 600 stores—about 15 percent of the total number of Walmart stores in the U.S.

That momentum fed into this week’s ambitious strike, which has no announced endpoint and which represents an “escalation” of the fight, says Dan Schlademan, director of Making Change at Walmart, a broad coalition of groups supporting OUR Walmart. For the time being, neither OUR Walmart nor Making Change at Walmart is pressing for union recognition—though the United Food and Commercial Workers union does support both organizations—but the workers do want protections of their right to act collectively on issues at work, whether or not they have a union. “We’re going to stay out as long as it takes…until there is real change,” says Schlademan.

Walmart has responded to OUR Walmart’s growth and assertiveness by escalating a public relations campaign touting the “real Walmart,” portrayed as a benevolent employer that has happy associates and plays a responsible role in the community. But Walmart, which is  grappling with slow sales growth and a deteriorating reputation, clearly feels the pressure. The company is trying to undercut the workers’ movement with the appearance of change, such as a promise earlier this year to be more transparent about scheduling (though workers I interviewed say they have seen no change). Store managers had also offered pay increases and promotions to some potential strikers, on the condition they show up at work this week, OUR Walmart leaders say.

But at the same time that Walmart struggles to improve its image, workers and advocates charge that it is also dismissing, disciplining and treating in a discriminatory way the leaders of OUR Walmart and other workers who raise their voices about problems. American Rights At Work, a non-profit group that seeks to protect workers’ legal rights, released a new report in May examining more than 150 allegations over the past two years of Walmart abuses of worker rights. It concludes that “Walmart continues to target those workers who speak out and act collectively,” using both direct, intimidating tactics against workers who come together to deal with problems and a “pervasive,” if more deceptive, retaliation under the guise of “routine enforcement of company policy.”

For example, Walmart used dubious enforcement of routine discipline in May to dismiss Carlton Smith, a national OUR Walmart leader. After many years of above-average assessments as “a model associate,” Smith, a 17-year veteran at Walmart and department manager at a store in Paramount, Calif., says that after he joined OUR Walmart, his evaluations dropped, official work obligations rose, and routine disciplinary write-ups started. Then on May 8, Walmart fired him for not working according to company standards. Smith argues in unfair labor practice charges filed with the National Labor Relations Board that the company violated its own disciplinary procedures in dismissing him, and he also got on the bus to Bentonville.

The ARAW study also reports that Walmart is stepping up legal attacks on demonstrations of support for its employees from other organizations, such as charging supporters with trespass in stores, parking lots or sidewalks near Walmart stores. This week, in response to a company request aimed at deterring protests leading up to the annual meeting, a Benton County judge issued a temporary restraining order sought by Walmart to keep anyone—except current employees—from stepping on company property.

Focusing on an employer’s penchant for retaliation can run the risk of intensifying workers’ fears. OUR Walmart leaders acknowledge such fear is the most effective tool the company uses to suppress workers’ efforts to bring about change. But that is why the organization has to both confront fear and educate workers about their rights. “I feel we’re dealing with reality,” Schlademan says. “Fear is one of the biggest obstacles, but a much more powerful message is that there is a path to stand up to retaliation.” And despite the company’s actions, Sparks believes that OUR Walmart’s protests, including the current strike, have given workers new courage and a sense of solidarity. “Associates across the country can see now that they’re safe and have federally protected rights and can stand together as one for a better Walmart,” she says.

With only 100 of 1.3 million U.S. associates on strike, OUR Walmart’s action clearly represents something different from an old-fashioned—and now extremely rare—shutdown of a company to win a demand. “Now strikes are about telling a story,” Schlademan says, an opportunity to reach out to potential supporters, to talk with other Walmart workers, or to address the press, public and politicians, not just walk a picket line with placards. “The strike says I’m going to risk my job and income, to take something I have power over—my labor—and withhold that to tell what’s wrong with the company.”

Since many Walmart strikers own stock in the company, they will be able to attend the annual meeting and try to speak. Sparks will have her chance to propose that executives must hold for at least five years any stock they receive as part of their compensation. The intention of the resolution, which should appeal to all shareholders but is unlikely to win approval, is to better align the interests of executives and that of the corporation’s owners. It is a modest good governance reform, but Sparks’ heart is more engaged with aligning the corporate interests with the interests of workers.

Carlton Smith is still looking for the changes he first sought through OUR Walmart: “Geez... Respect, not being retaliated against for standing up for what’s right, affordable health care, enough hours of work to make a decent living—basically [changing] the way management treats associates, the way they talk to them.” Despite his own firing on what he sees as unjust terms, he remains hopeful.  “The strike demonstrates how OUR Walmart is growing, he says, “and it shows solidarity and that we know our rights.”

Sparks, energized by the strike, shares his optimism. “The first time I went on strike was inspiring,” she says, “and this one even more so…This is even more empowering, that more of us are standing together, and after we walk back in and do our jobs with integrity, the change is coming. It seems possible.”