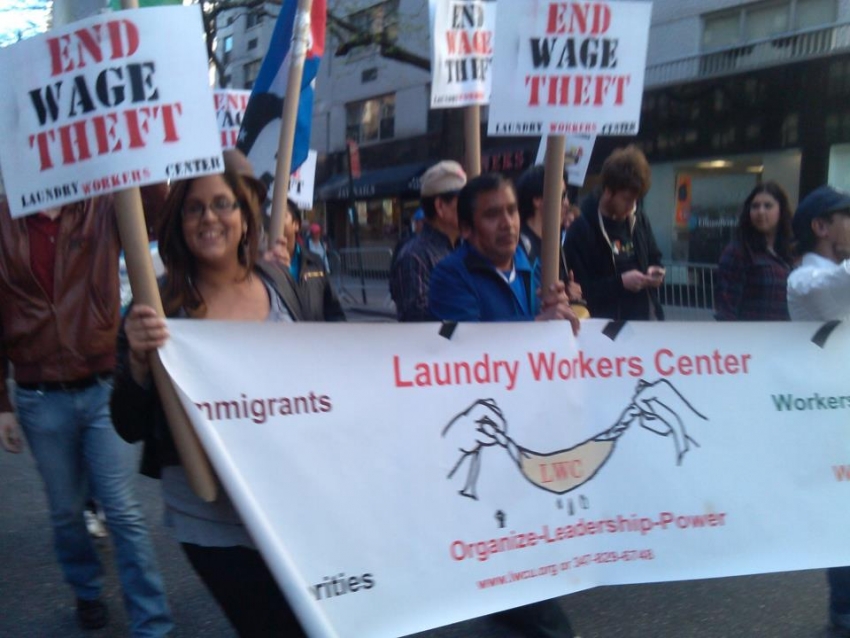 A handful of workers outside an apartment building in the Murray Hill neighborhood of midtown Manhattan passed out flyers under the watchful eyes of the door guard. The flyers were addressed to residents of the building, informing them that their neighbors, the owners of upscale deli chain and catering company Dishes, “are profiting from years of unpaid wages and numerous workplace violations.”

Two of the men handing out flyers on this particular evening, June 4, had been fired from Dishes' 45th Street location—one after complaining that his wages were being slashed in retaliation for a wage-and-hour lawsuit he had filed, and the other after lobbying for the first worker’s reinstatement.

Until recently, both were happy employees who had been with the company for more than a decade. They took pride in their cooking skills and had—or thought they had—a good relationship with their boss, the restaurant's owner, Moshe Mallul, who lives at the Murray Hill apartment complex. (Mallul could not be reached for comment.)

Also present on the Murray Hill street corner were current Dishes employees, part of a committee organizing with the Laundry Workers' Center to call for their colleagues’ reinstatement and a fair settlement for what they say are years of owed overtime pay. The Laundry Workers' Center, staffed by volunteer organizers, shook up New York's labor movement last year when it teamed with Occupy Wall Street-affiliated solidarity groups to win unprecedented victories at the Hot & Crusty bakery, including an independent union and a hiring hall. Now the workers from Hot & Crusty are passing on what they learned in their struggle to their comrades at Dishes.

The relationship began after a Dishes worker happened to see the occupation of the Hot & Crusty store at its height, when community members were getting escorted out in handcuffs. According to Lily Defriend, a volunteer organizer with the Laundry Workers' Center, that worker was surprised to see the depth of community support and the willingness of the Occupy activists to brave arrest for workers.

Meanwhile, unknown to the crew at the 45th Street Dishes, a class action lawsuit covering all the company's employees had been filed by law firm Pelton & Associates, alleging that the company had illegally withheld overtime for at least six years. The suit, with two lead plaintiffs, covered all current and past Dishes workers from the past six years.

When news of the suit hit, the workers say, the Dishes management called a meeting at the 45th Street location and handed out a written statement for the workers to sign, indicating that they would now be paid overtime—but that their regular hourly wage would be slashed, in some cases from $14 or more an hour to around $10.

Joshua Duah, a chef at Dishes for 12 years, says he was devastated. “I told them I'm not going to sign,” he says. “I also wrote a letter. I asked them, 'Are you also going to give us a letter indicating that for the past 12 years we've worked you've never paid us overtime?' ”

Instead, he says, they fired him.

The remaining workers, far from being cowed by Duah's firing, rallied and reached out to the Laundry Workers' Center for help. They composed a letter of grievance to their bosses at Dishes, and together with a group of community supporters, rallied at the store to deliver the letter on March 13, asking for Duah to be reinstated. Nii Yarlai Tackie-Yarboi, who had been at Dishes for 10 years, was working that day and joined the community group when his shift ended. The next day, he was informed that there would be a “disciplinary action” taken against him. He requested to have his lawyer present, he says, and they told him to leave. He believes he was fired because he took part in the protest.

“If I had any disciplinary issues, why should they retain me for 10 years?” Tackie-Yarboi says.

Since then, the workers' committee—supported by the Laundry Workers' Center and community groups including 99 Pickets, an Occupy Wall Street spinoff labor justice coalition—has been in campaign mode. They regularly hand out flyers with their complaints in front of the store and at the other Dishes locations (there are four all together, including two in Grand Central Terminal). 99 Pickets made Dishes a stop on its May Day Immigrant Worker Justice tour, and the combined pressure helped bring the management to negotiations with the workers.

“What seem like low-key actions are often the most effective, because it's actually the workers themselves being incredibly courageous, standing in front of the store, confronting the owner with their problems, showing him that they're not afraid, telling the public what's going on,” Defriend says.

The workers also filed charges with the National Labor Relations Board, alleging that the firings were an unfair labor practice because they were in retaliation for activity protected by the National Labor Relations Act. Law firm Eisner & Mirer also filed charges in federal court over the workers' wage-and-hour claims, along with allegations that the workers were retaliated against.

“The Laundry Workers' Center sees the legal process as a tool,” Defriend says. “But primarily, obviously having the workers organizing themselves is really what gets a campaign going, because a lawsuit like that can take years and years and years.”

According to Ben Dictor, an attorney with Eisner & Mirer, the company agreed to mediate all the legal issues at once to seek one large solution. The workers too wanted an amicable resolution to their dispute, and agreed to stop handing out flyers as they headed into mediation on May 30. But in the two weeks leading up to the first meeting, two additional workers were fired and one was suspended. Feeling like the bosses weren't coming to the table in good faith, the workers decided to take more action, bringing their flyers to a synagogue where Mallul is on the board.

Acting independently, 99 Pickets also stepped up their activism this week, visiting the store during the lunch rush on Monday and holding up the lines to slow down business, then handing out flyers to the other customers explaining the reason for the action. (It's worth noting that independent actions like these can backfire: While solidarity with workers' struggles from the larger community is helpful, some actions can result in more work for the people who are ostensibly being supported.)

The Laundry Workers' Center believes in making sure that the workers decide how a campaign moves forward. At the same time, its power in part has come from community support, particularly from the Occupy movement, which has lent excitement (and bodies) to New York labor actions. People were willing to come out for rallies and pickets like the ones at Brooklyn grocery stores and even to risk arrest, in numbers that hadn't been seen in a long time. And while they're waiting to find out the results of a lawsuit, worker and community pressure can help bring change faster—like it did for Hot & Crusty.

In addition to the issues of unpaid overtime, the workers are concerned with health and safety conditions within the store. On Fridays (the store is closed on the weekends) they clean everything out with harsh chemicals and no protective gear—many of them report burns up and down their arms. They regularly work 12-hour days (hence the large amount of unpaid overtime they are claiming) and say they only get a 15-minute break, for which they're required to clock out.

“It's kind of extraordinary when you're organizing the low-wage worker sector in New York just how audacious a lot of managers and owners are,” Defriend says.

The company, Dictor says, is “saber-rattling” that it is going to pull out of mediation because of this week's actions, but he says the workers still want to negotiate. All they want, he says, is for their boss to sit down with them and talk. “The workers have been extending their hand since Day One to seek a negotiated resolution to these issues," Dictor says. "The company has fought them at every turn.”