Strike Looms as Patriot Coal Walks Out on Negotiations 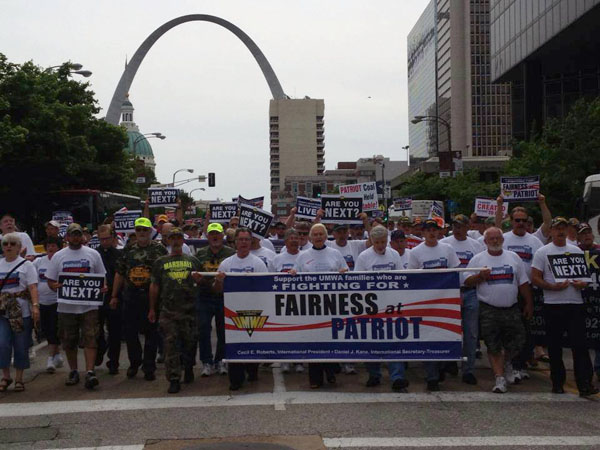 Yesterday, according to the United Mine Workers of America (UMWA), Patriot Coal walked away from the bargaining table, indicating that starting July 1, they would unilaterally implement a new contract, one likely to severely cut the pay and benefits of 1,700 current union workers and the benefits of 23,000 retirees. Patriot gained this ability on May 29 after a federal bankruptcy judge gave the company the power to cancel previous collective bargaining agreements.

Patriot Coal CEO Bennett Hatfield had indicated that the company would continue to negotiations with the union, saying after the court decision, “while the Court has given Patriot the authority to impose these critical changes to the collective bargaining agreements, and our financial needs mandate implementation by July 1, we continue to believe that a consensual resolution is the best possible outcome for all parties.” But the UMWA now says that Patriot has cancelled all bargaining sessions for this week and next week, which suggests the company plans on implementing a contract without input from the UMWA.

Patriot Coal did not return a request for comment about why it walked away from the bargaining table. (See update below.) UMWA, however, was outraged by the decision.

“We are very disappointed by this action,” UMWA President Cecil E. Roberts said in a statement. “We had made significant progress toward reaching an agreement that provided a workable alternative to the severe terms Patriot asked for last spring and that were approved by the bankruptcy court in St. Louis. The union had agreed to more than $400 million in savings for the company over the life of the current contract, which gives them the money they say they need to survive. But that still wasn’t enough for them.”

“When the company walked out, we were only about $30 to 35 million apart, which given the scope of this problem really isn’t all that much,” Roberts said. “A big chunk of that money is in bonuses the company wants to pay management personnel into the future."

Without any agreement on a contract in place, if Patriot chooses to implement pay terms, the UMWA would be legally allowed to have its 1,700 workers at Patriot strike at any time.

“I have consistently made it clear to management that I could not recommend to our membership that they work under those terms, because the sacrifices they require from our active and retired members are too great,” Roberts said in the statement. He added that the membership of the union will now vote on whether they want to strike and that the vote will likely come before July 1.

Striking, though, could be a very risky choice for the union. Hatfield has hinted in the past that if the union struck Patriot Coal may be forced to liquidate the company. If the company sold off its mines, the new owner would decide whether to allow the union to return to work at them. When Hostess went through a recent bankruptcy and, after its union workers struck, sold its factories, the new owners decided to re-open the factories non-unionized.

The UMWA, however, would prefer not to hold a strike vote and hopes Patriot returns to the bargaining table.

“We want to work these things out. We want to continue these talks,” says UMWA Communications Director Phil Smith. “We are disappointed that they walked away.”

UPDATE: After this story went to press, Patriot Coal released a statement calling the UMWA's charges "distorted and inaccurate" and insisting that it had "not 'walked out' out of negotiations with the UMWA." Instead, it said the two days of cancelled meetings this week "was needed for financial analysis of UMWA demands."