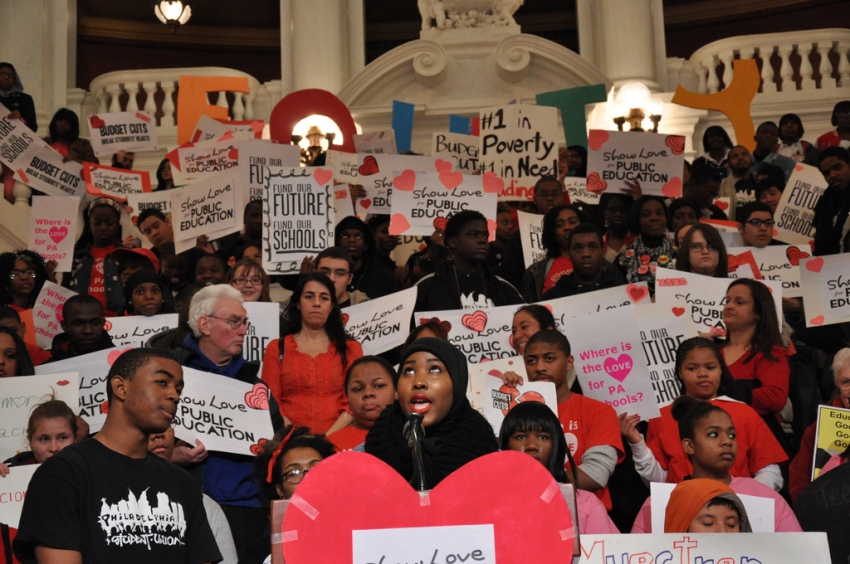 Despite educators’ best efforts, urban school systems are bleak places to work at and learn in these days, no matter the city or one’s position in the school. But Philadelphia offers a particularly grim view of the dismantling of public education in the austerity era. Few American city school systems have faced measures as devastating as Philadelphia’s—at the very same time the state government has passed massive corporate tax breaks and increased funding for incarceration.

Citing a budget deficit of $304 million in the coming fiscal year, the city’s School Reform Commission voted in March to close 23 public schools, about 10 percent of the city’s total schools. And this week, the district announced a staggering 3,783 layoffs—676 teachers, 769 assistants and 1,202 school safety staff—if additional funds cannot be generated from the city, the state and concessions from public sector workers.

The closures were not Philadelphia’s first, nor were the layoffs—nine schools were closed and more than 3,000 jobs were eliminated in 2011. In that year, Republican Gov. Tom Corbett slashed more than $1 billion to public education in the state’s budget (along with other brutal cuts to the social safety net throughout Pennsylvania).

Those measures were considered devastating at the time. The currently proposed closures and cuts go even deeper.

“Philadelphia schools are on life support,” says Ron Whitehorne, a retired teacher and activist with the community-labor group Philly Coalition Advocating for Public Schools, “and they’re about to pull the plug.”

The district is seeking $313 million before the end of the month. It is requesting more tax dollars—$60 million more from the city, $120 million from the state. But a plurality of its plan to close the deficit comes from union concessions and givebacks, to the tune of $133 million, most of which come from Philadelphia teachers.

Even at a time of widespread austerity, the scope of concessions demanded of Philly teachers is jaw-dropping. Under the district’s contract giveback demands, teachers earning more than $55,000 a year would receive a 13 percent pay cut, along with a 13 percent hike in health care contributions. Tenure and sabbaticals would be eliminated, the workday would be lengthened (and teachers would be forced to work additional hours off the clock without pay). Librarians would be eliminated, and schools would no longer be required to have counselors. Limits on class sizes would be lifted.

The time to stop this downward spiral of bulls--it is right now. ... If this really is the deal, Philadelphia teachers need to walk off the job. That's right -- strike. And anyone who cares about the ability of the middle class to raise a family -- particularly a well-educated family -- needs to stand behind them.

City and state politicians might be able to justify the measures as painful but necessary decisions at a time of “shared sacrifice” if they weren’t simultaneously handing out hundreds of millions of dollars to corporations and Wall Street, upping their contributions to charter schools, and building a new prison. Last month, for example, the Republican-controlled state legislature passed a corporate tax cut that would cost the state $600-800 million per year, more than double Philadelphia schools’ deficit for the next fiscal year.

“How can you call for shared sacrifice while huge businesses are getting a tax break?” says Whitehorne.

The district spends more than 10 times the national average servicing its debt, with an astonishing $280 million—12 percent of its entire budget—going to interest payments and $161 million going to Wall Street firms in what have been called ”toxic” interest rate swaps, under criticism in other cities for unjustly robbing schools of resources.

“This is a [gubernatorial] administration that has bent over backwards to accommodate corporate interests,” says Whitehorne.

Charter schools have had to make some cuts over the years, but their percentage of the district’s total education budget—30 percent, at $729 million for FY 2014 (PDF)—continues to grow, with an estimated 40 percent of the city’s students slated to attend charters by 2017. And perhaps most incredibly, within days of the layoffs announcement, the state began work on a $400 million new prison north of Philadelphia.

The expansion of prisons at the time of massive school budget cuts makes some sense, since the 3,783 layoffs include the total elimination of all 1,202 of the district's school safety workers, who monitor cafeterias, hallways and other areas of schools to de-escalate conflicts and violence between students, a longstanding problem in Philadelphia. If safety workers are eliminated, only police officers will remain in the schools, which could easily accelerate what activists call the “school-to-prison pipeline.”

Doris Hogue works at South Philadelphia High. She has worked as a school safety worker for 20 years, and is a member of UNITE HERE Local 247.  “At one time, there were interracial fights going on,” Hogue says, referencing widespread violence between African American and Asian American students in the school system several years ago. “We developed rapport with the children. They began to trust us, and we were able to help diminish much of the violence.” She says the number of violent incidents is down in her school. In a report released by UNITE HERE, 40 percent of student safety staff reported recently witnessing a violent incident where there were not enough safety personnel present to address it. If the layoffs go through as planned, there won't be any.

“We’re not just safety staff—we’re like their mothers,” Hogue says. “They come to us if they hear a fight’s going to happen, or if they’re being bullied. I don’t think the district recognizes what will happen in September when the children come back to school without us there.”

Philadelphia was subject to what the Rand Corporation called “the nation’s largest experiment in the private management of public schools.” As reporter Daniel Denvir notes, that project included the takeover of Philadelphia public schools in 2002 by the state, which then established the School Reform Commission (SRC) “to oversee the district and turned 45 schools over to private managers, including for-profit educational management organizations.” But according to Rand, despite the massive number of schools privately managed, student achievement did not improve—and the school’s deficit only deepened. Rather than pull the district out of the red, privatization plunged Philadelphia schools further into it, thus justifying the need for further austerity measures.

Students, teachers and other education workers, and community members seem to be stepping up their pushback to the draconian cuts. In March, 19 people were arrested at the SRC meeting where the closures were voted on, including American Federation of Teachers President Randi Weingarten. (Whitehorne says those charges were dropped yesterday.) Students have led multiple walkouts throughout the city. Protests are continuing to ratchet up, including a scheduled rally in Harrisburg, the state capital, at the end of the month. But with almost half of the $323 million to plug the deficit coming on the backs of public-sector workers, the options for Philadelphia schools seem to range from bad to worse.

“If they don’t work anything out, and the money doesn’t come in, I feel it would be so dangerous for any schools to open,” says Hogue, the school safety worker. Come September, “I can’t imagine what it’s going to look like. It’s not going to be good.”