What Are ‘Micro-Unions,’ and Why Is Big Business So Upset About Them? 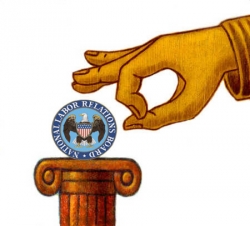 Conservatives have created the myth of the 'micro-union' in a direct attack on worker organizing around the country. (Wikimedia Commons)

Legislation was introduced in Congress late last week that will, in the words of one of its prominent supporters, rein in government officials who are now encouraging "swarms of micro-unions" to descend on non-union employers for the purpose on "annihilating companies through a death of a thousand cuts."

Such lurid language has helped put the bill on the fast track in the Republican-controlled House of Representatives, where the legislation has already been scheduled for a hearing next week before the Education and the Workforce Committee. Most observers expect it will receive quick approval there on its way to easy passage by the full House.

Readers of Working In These Times can be forgiven for wondering what a micro-union is, exactly, and why Geoffrey Burr of the anti-union lobby group Coalition for a Democratic Workplace used such extravagant language to describe it. The term itself is not in common usage, even among labor lawyers and other union experts, and it does not even appear in the language of the House bill introduced June 13 by Rep. Thomas Price (R-Ga.)

A micro-union, in short, is a relatively new description for a time-worn labor organizing technique that focuses on smaller, sharply defined groups of workers for the purpose of creating collective workplace action. That tactic, although nothing new, rubs against the grain of the popular imagination of labor organizing as a mass movement against large, highly visible corporations.

“It’s definitely an invented term, and doesn’t come from labor [sources] at all. In fact, it's a complete fabrication of the right wing," says Jay Lederer, communications director of the International Union of Operating Engineers (IUOE).

Indeed, Robert Sullivan, a lawyer for the lobby group Retail Industry Leaders Association (RILA), had difficulty with a definition when he testified to Congress in October of 2011 about the threat of micro-unions. He described them as “a bargaining unit composed of small groups of employees” within a larger group of workers employed by the same organization. No specific number of employees was attached to such bargaining units by Sullivan, nor was any existing labor union cited as an example.

Lederer explains that the term has been adopted and promoted by prominent business lobbyists as the latest phase of their years-long campaign to hobble the National Labor Relations Board (NLRB), which is charged with enforcing the country's premier labor laws. The business lobby's agitation against the NLRB escalated sharply when President Barack Obama first took office in early 2009 and control of the board passed from conservative Republicans to more labor-friendly Democrats, he notes. And the NLRB's 2011 ruling in a case called Specialty Healthcare and Rehabilitation Center of Mobile and United Steelworkers inspired the lobbyists—including the U.S. Chamber of Commerce, the National Association of Manufacturers and RILA—to settle on the term "micro-union" to imply something new, unusual and threatening about the the board's decision, Lederer indicates.

The ruling said that the Steelworkers union was justified in asking for a union representation election that included only a limited number of certified nursing assistants—known a CNAs—rather than the broader group of employees that the company would have preferred. The decision was seen by anti-union lobbyists and their Republican Party supporters as an aggressive move by the NLRB in favor of unions and against business interests.

In fact, the ruling in the Specialty Healthcare case was not radical in any way, says IUOE's Lederer. The decision may make the legal procedures of union organizing a little simpler in some cases, but there is no broad or profound change in the status quo, he says.

William Gould IV, a law professor at Stanford University who served as NLRB chairman during the Clinton administration, concurs. “The whole objection to what the board is doing is silly. There is nothing remarkable in Specialty Healthcare in terms of what is intended” by the original National Labor Relations Act of 1935, he says. There are thousands of workplaces across the country where tiny union bargaining units exist, and there is no basis in labor law to suggest there is anything inappropriate or illegal about that, Gould tells Working In These Times.

The Republican argument against micro-unions is essentially spurious, Gould suggests. He says it appears to be nothing more than an attempt to make any sort of new labor organizing more difficult—and to inflate an obscure point of labor law into a big political issue for use in the partisan battles between Republicans and Democrats in Congress.

The legislation proposed by Rep. Price, and a similar bill introduced into the upper chamber by Sen. Johnny Isakson (R-Ga.), would act to put some new restrictions on the NLRB. It's best understood as the latest in a series of efforts by anti-union business interests to hamstring the agency, Gould says. Rather than an attempt to blunt any specific labor organizing campaigns underway today, the proposed law appears aimed at gradually eroding the ability of any union to assist workers through the procedures of the NLRB, he suggests.

More bluntly, there is no such thing as a micro-union, either as a description of an existing labor organization or as a definition of a union organizing tactic, contends Stewart Acuff, former organizing director for the Utility Workers Union of America (UWUA).

“I have a lot of experience in labor organizing and nobody uses that terminology,” Acuff says. “We do talk about minority unions—and by that I mean organizing a workplace when you only have a minority of workers supporting the union, not as a racial classification for the workers themselves."

"Minority union organizing can be effective," he says, so it is the likely target of the Price-Isakson legislation. “It’s pretty easy to imagine the meeting over at the Chamber of Commerce when they talked about attacking minority unions,’” he offers with a sarcastic chuckle. "The first thing they had to do was come up with a different name, because it would just look so terrible if the headlines said ‘Chamber Attacks Minority Unions.’ So, instead we get ‘Chamber Defends Against Micro-Unions."

Acuff, who has worked as an organizer with the UWUA and the Service Employees International Union, adds that most unions are not especially worried about the Price-Isakson initiative because it seems unlikely to pass the Democratic-controlled Senate.

Indeed, the House passed a similar version of the Price legislation in 2011 only to be ignored by Senate Democrats. Even in the unlikely event of Senate passage, it would face a certain veto from Obama, he says. “This bill is a little like the House repealing Obamacare for the 37th time or abolishing abortions again—it’s all for show for Tea Partiers back home and doesn’t have much impact anywhere else,” Acuff says.

Nevertheless, this attack on labor organizing rights deserves some attention, according to Acuff. With almost all legal protections for worker organizing now under attack, he says, spirited pushback is essential to restoring the influence of unions in the broader workplace.