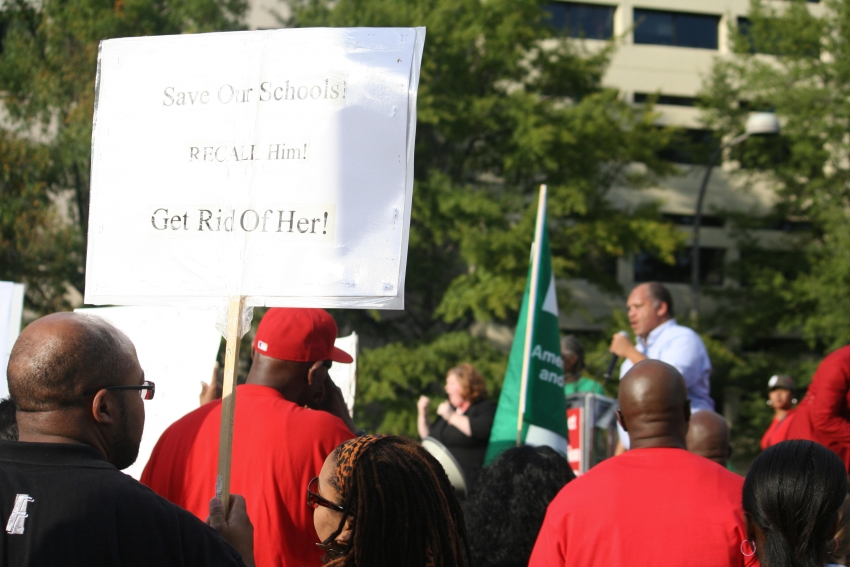 The district's push for so-called education reform has long been a sticking point for the Washington Teachers Union, as evinced by this poster criticizing officials Michelle Rhee and Adrian Fenty from a 2009 rally. The perceived capitulation of several WTU presidents to such an agenda has forced them to leave office.   (mar is sea y/Flickr/Creative COmmons)

With the vote, the WTU follows in the footsteps of the Chicago Teachers Union (CTU), which elected the insurgent Caucus of Rank and File Educators (CORE), led by Karen Lewis, in 2010. Like CORE, the DC reformers promise to resist school closures, privatization efforts, and the proliferation of high-stakes testing.

The WTU certified the results Monday night, with Elizabeth A. Davis winning 459 votes to Saunders’ 380.

Davis’ running mate, Candi Peterson, spoke to In These Times by phone this morning. This is Peterson’s second time assuming the office of WTU’s General Vice President, after being elected on a reform ticket with Saunders in 2010. In that campaign, Saunders and Peterson accused the incumbent WTU President George Parker of running a business union and critiqued his allegiance to American Federation of Teachers (AFT) President Randi Weingarten, who had encouraged the union to accept an unpopular contract—which included the implementation of IMPACT, a teacher evaluation system —supported by then-school chancellor Michelle Rhee and mayor Adrian Fenty.

Reflecting on her first stint as general vice president—she was dismissed by Saunders in 2011—Peterson says, “Saunders didn’t share my vision of what a participatory union looks like.” She paints a picture of a union that was run by one man and failed to sufficiently engage members to advocate for their own rights. This time, Peterson hopes, will be different; she and new president Elizabeth A. Davis promise more rank-and-file participation.

On certain substantive issues, the camps are not too far apart. Saunders remained hostile to many aspects of the corporate reform efforts, but it wasn’t enough to appease members. Speaking to the Washington Post, he said, “They want more aggressive change than what I was dishing out.”

That isn’t to say the former president’s tenure wasn’t filled with fireworks. Though Peterson was directly elected as general vice president in 2010, she was removed by Saunders the next year without any recall procedure, which violates union guidelines. She won in arbitration in September, but was not reinstated afterwards to serve the duration of her original term. Even now, she’s having trouble assuming office. The WTU constitution allows for no lame duck period, and when Saunders was elected in late November 2010, he took control of the union the next day. Yet Peterson and others in the reform slate were denied entry to the office yesterday. Peterson described the transference of power as a “hostile situation,” but while Saunders declined to comment, a staffer within his camp told In TheseTimes that he believes the old leadership would not vacate until the end of the month.

The nationwide push to standardize, privatize and shut down public schools has sparked an opposition movement both inside and outside teachers unions. Though media attention has focused on the actions of teachers and students in Chicago and New York, fronts have been opened in places like Newark and Washington, as well. In Newark, facing challenge from reformers local President Joseph Del Grosso was elected by a margin of just nine votes last Tuesday. The challengers, like the Washington teachers, were openly inspired by the example of CORE, and still won a majority of executive board seats.

As has become common in American union elections, only 1,200 of 3,000 Newark Teachers Union members cast ballots, but the showing against a long-time incumbent surprised many. The result there, like the one in Washington, will cause some alarm for Weingarten and her team. Not unlike tactics used years ago in Washington, the AFT leadership had recently mobilized national organizers in Newark to promote a contract that won the acceptance of New Jersey Governor Chris Christie and Newark Mayor Cory Booker.

The results in Newark and DC, long laboratories of neoliberal education reform, represent part of a grassroots backlash to these kinds of policies. It remains to be seen, however, whether these local efforts will be enough to stop what has long been a national push to redefine public education along corporate lines.