Boss-napped: What We Can Learn From China’s Labor Banditry 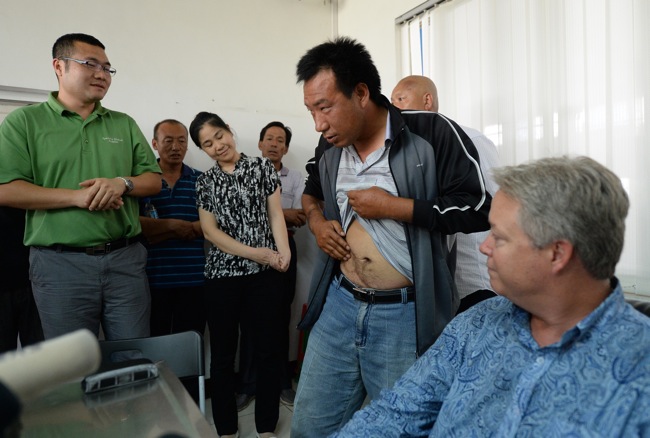 An injured worker angrily confronts U.S. businessman Chip Starnes (R) at a press briefing on June 26, 2013. Prior to the briefing, Starnes had been held hostage at his Specialty Medical Supplies business in Huairou, Beijing for six days over wage disputes. (Mark Ralston/AFP/Getty Images)

Many workers struggle to hold onto their job, but when you’re feeling especially insecure about your employment situation, you might want to try to hold onto your boss instead. Last month, a worker-led siege at a factory near Beijing gave the world a dramatic glimpse into the workplace dynamics of Chinese capitalism.

When workers at Specialty Medical Supplies confronted their American boss, Chip Starnes, over concerns about wages and layoffs, the dispute escalated into a tense—but nonviolent—hostage situation. Starnes was held under lockdown at the facility for six days. The conflict was resolved, CNN reported, when “Starnes reached an agreement with the workers after a pay dispute. Officials said 97 employees signed a new compensation agreement.” Starnes later claimed he was forcibly held for ransom.

Though there have been other incidents of workers in China holding bosses captive in labor disputes, the captivity of a U.S. executive attracted worldwide media attention and drew some commentary on the “risks” of foreign investment in China's restive workforce.

However, the standoff actually speaks to another kind of risk: the deep job insecurity faced by millions of Chinese workers on the wild frontier of globalization. And despite appearances, there was more method than madness to the hostage taking.

According to news reports, the clash began when the company moved to shutter one sector of the plant and ship jobs to India. Some workers were reportedly offered transfers to other divisions; others could leave their job with severance packages. The official story was that conflict arose when some who were slated for transfer also demanded compensatory payment.

But workers claimed the protest was actually about wage arrears, and that when they saw that “no new materials had entered the factory," they also feared Starnes was actually planning a mass layoff. While confusion over the terms of severance might have been a factor, workers had justifiable fears of getting shafted.

After all, in 2012, millions of workers were involved in complaints about unpaid back wages and business shutdowns. The estimated number of unemployed is approaching 920 thousand.

Workers don't have a guarantee of past wages or severance deals in the case that management decides to move the company or close down. Chinese bosses have been known to simply run away when a factory is in financial straits.

Since labor protection and regulatory enforcement are so weak, Slaten says, direct action like the Beijing incident ”is a clear case of worker rights defense, even if it is perhaps a less utilized method of protest then, say, strikes. Unions are unhelpful and the legal process often too long or expensive, so workers chose to force an early resolution.”This radical tactic was at play in another labor dispute this week at a Huizhou piling factory, where, according to Radio Free Asia, workers who feared they would be laid off detained five managers to demand assurances that they would be properly compensated.

Other spectacular worker actions have been more tragic, such as the spate of suicides by young workers at the Apple-affiliated electronics manufacturer Foxconn. But whether workers succumb to despair or protest militantly, their actions reflect deep economic frustration.

And extreme workplace conflicts or tragedies can lead to labor gains, at least in the short term. In the wake of the Foxconn suicides, Foxconn and Apple offered wage hikes and reform programs to improve working conditions. After Honda workers staged spontaneous strikes in 2010, local minimum-wage standards were raised--demonstrating that governments might intervene on behalf of workers to tamp down social unrest.

Sometimes workplace strife does turn violent—such as the 2009 anti-privatization uprising at a state-owned steel plant that left one manager dead, and a riot at a Foxconn plant last fall. However, labor agitation in China often reflects political savvy rather than outright aggression. The Beijing hostage affair was primarily marked by civility, carefully calibrated to force concessions without prompting retaliation. Capturing a foreign boss is also a strategic move, according to Geoffrey Crothall at the watchdog group China Labour Bulletin. “They could be more sure of support from the local government in the dispute," he tells In These Times.

In an incident similar to the Beijing standoff, workers at Hengbao Jewellery in Guangzhou organized a protest and workplace occupation in 2010 in response to disputes over social security payments. This prompted authorities to detain protesting workers. More protests followed, leading to formal negotiations with management and the official union.

Overall, both the Hengbao and Specialty Medical Supplies incidents illustrate inherent asymmetries in the corporate structure. Workers can sometimes force immediate concessions through protests, but without real collective bargaining mechanisms, they remain ultimately disempowered. Authorities can easily be called in to crack down on their "public disturbance," even if it's the boss who has breached a contract.

So, direct action like a hostage-taking may yield direct results in a labor dispute, like forcing employers to the negotiating table—but not necessarily systemic change. Even Foxconn's worker suicide crisis wasn't enough to spur long-term structural reforms; advocates say Foxconn has largely failed to follow through on promises to improve factory conditions and institute more representative union elections.

Yet in any workplace without strong, independent unions, militant action may be the only available defense against an unscrupulous boss. And it could prove an effective, if short-term pressure tactic—inside and outside China.  France has actually turned “boss-napping” into a political art, with several labor conflicts in 2009 involving the seizure of the means of production by seizing the employers themselves. According to the New York Times, besieged Caterpillar executives in France were “subjected to a night of pounding revolutionary rock music and threats shouted by workers”--though the tensions at 3M may have been smoothed when workers served their captive frites and mussels. As with the Beijing affair, the French bossnappers reflected a flair for public relations: the most prominent incidents targeted managers at foreign brands like 3M and Sony.

From a global standpoint, then, last month's standoff in Beijing is not as chaotic as it seemed: It’s the result of a sophisticated political calculus, driven by workers who understand the influence of media, the nature of multinational management structures, and symbolic power of claiming space. When “legitimate” institutions fail to protect their rights at work, then it’s up to workers to use their ingenuity to seize that power by other means.