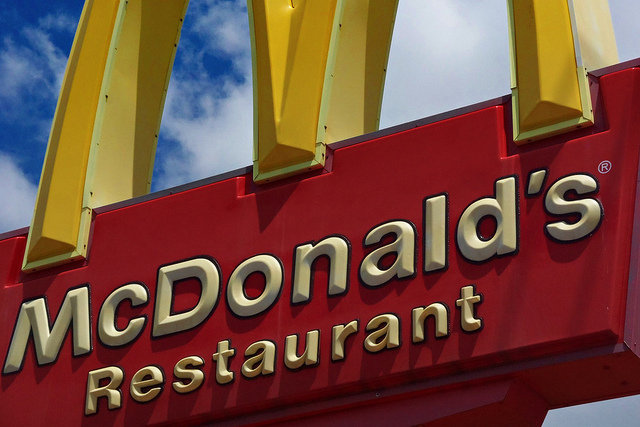 The McDonald's franchise that was sued by an employee over its required 'payroll debit cards' has now made them optional.   (Daniel Oines / Flickr / Creative Commons)

Outrage has been building over payroll debit cards—fee-laden prepaid bank cards that some businesses now use to pay their workers—since the Times Leader reported on June 17 that Natalie Gunshannon of Dallas Township, Pa. had sued the McDonald's where she worked for making the cards compulsory. The cards are loaded with sneaky fees that leave workers essentially paying the bank for access to their wages.

Since the story broke, Gunshannon's employer has made the cards voluntary, and New York state has opened an investigation into their use.

Working In These Times covered the story on June 20, reporting:

The lawsuit, filed by attorney Mike Cefalo of Cefalo & Associates and provided to In These Times by the firm, alleges that the cards violate the Pennsylvania Wage Payment and Collection Act, which provides that 'Wages shall be paid in lawful money of the United States or check.' The suit further alleges that the fees reduce the actual wages workers receive—in some cases bringing them below minimum wage, which in Pennsylvania remains at the federal minimum wage rate of $7.25 per hour.

The story spread rapidly—the New York Times ran a front-page piece last week, reporting, “In 2012, $34 billion was loaded onto 4.6 million active payroll cards, according to the research firm Aite Group. Aite said it expected that to reach $68.9 billion and 10.8 million cards by 2017.” MSNBC's Chris Hayes (a former In These Times reporter) covered the issue on his July 3 show, asking “Do you want to work for half an hour for free? Because that half hour of you busting your butt just went to the bank.”

Under the onslaught of negative press, there have been steps in the right direction—the McDonald's franchise where Gunshannon worked has now said that it will offer all its employees the option of a paper check or direct deposit, in addition to the card. Previously, according to the lawsuit, only managers had that choice. The decision covers some 800 workers at 16 stores. “We didn't hear any complaints. Many employees have been using these cards without complaint for many months. When it became apparent there were some employees who may want the choice, we're going to give them the choice," a company spokesperson told the Associated Press. (Gunshannon isn't dropping her lawsuit, though, saying that the company's actions are “damage control.”)

In New York, the political battle over a bill that would allow the cards is heating up. Michael Kink, executive director of Strong Economy for All, told Working In These Times, "In New York, workers need protection against both unscrupulous employers who rip them off with payroll debit cards and shady lawmakers in Albany who want to blow the doors wide open for even more ripoffs. Right now Attorney General Eric Schneiderman is digging into current abuses, and unions and community groups—with great work by the New York State AFL-CIO—are fighting hard to stop bad bills in the Legislature."

As Kink noted, perhaps the biggest impact of the heightened scrutiny has been the announcement by New York Attorney General Schneiderman that he would look into the use of the cards. The attorney general's office sent letters to 20 large employers, including McDonald's, Walgreens and Wal-Mart, asking about their use of the cards. He's investigating whether businesses that use the cards may have broken state labor laws, and whether workers are forced, as Gunshannon said she was, to use the cards as a condition of their employment.

The Consumer Financial Protection Bureau has also been looking at the cards, a version of which is also used in many states to distribute unemployment benefits. Working in These Times will continue to follow this story.