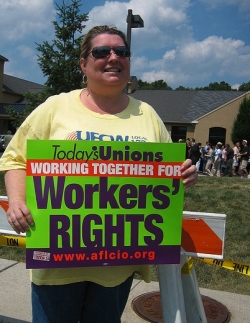 Despite splitting off in 2005, the UFCW has frequently cooperated with the AFL-CIO. Here, a UFCW worker holds an AFL-CIO sign at an anti-McCain rally in 2008. (aflcio/Flickr/Creative Commons)

UPDATE: On Aug, 8, 2013, the AFL-CIO announced that the UFCW would indeed rejoin the federation. In a statement, AFL-CIO President Richard Trumka said:

Today’s decision by the UFCW to unite with the broader labor movement is great news for workers living in the ‘new normal’ of the low wage economy—working women, young part time workers, retail workers, immigrant workers and so many more. A stronger, more unified grassroots movement of working men and women is exactly what’s needed to raise wages for workers and rebuild an American middle class.

July 7, 2013: High-level sources within the AFL-CIO and its affiliated unions tell Working In These Times that the 1.3-million-member United Food and Commercial Workers International Union (UFCW) is in talks to rejoin the labor federation. These sources say that UFCW leaders have pledged their support for returning to the AFL-CIO and will ask members to vote on the question at the annual UFCW convention in Chicago this August. With the leadership backing reunification, the UFCW membership is expected to approve the motion.

In 2005, the UFCW and several other large unions—the International Brotherhood of Teamsters, the Service Employees International Union (SEIU), the United Brotherhood Of Carpenters, the Laborers’ Union, Unite Here and the United Farm Workers of America—split off from the AFL-CIO to form a rival federation, Change to Win. At the time, the unions said they were departing in order to explore new ways of organizing. However, some critics claim that one of the underlying motives was to cut down on dues—as of 2011, Change to Win charged roughly half of the AFL-CIO’s per-member rate.

The return of the UFCW would be a major victory for AFL-CIO President Richard Trumka, who has striven since his election in 2009 to reunite the labor movement under the 14-million-member federation.

Several Change to Win members have since returned to the AFL-CIO. In 2009, after a bitter membership battle between rival factions within Unite Here that saw a third of the union’s members depart for SEIU, the remaining 265,000 members of Unite Here voted to rejoin the AFL-CIO. Two more of the original seven Change to Win members departed at that time: the 500,000-member-strong United Brotherhood of Carpenters in 2009 to become independent, and the 500,000-member Laborers’ Union in 2010 to return to the AFL-CIO.

But the defection of the 1.3 million-member UFCW would be by far the biggest loss of membership yet for the fledgling Change to Win. It raises the question of whether or not any of the remaining members—the SEIU, the Teamsters or the United Farmworkers—will enter talks with the AFL-CIO. None of the three unions returned requests for comment for this article.

Official spokespeople for Change to Win, the UFCW and the AFL-CIO also did not respond to comment requests. However, three high-level sources within the AFL-CIO and its affiliate unions, who said they did not want to give their names out of fear of damaging negotiations about what role the UFCW will play in the AFL-CIO, did confirm privately to Working In These Times that the UFCW is expected to rejoin the AFL-CIO following this summer’s convention.

The return of the UFCW would be a major victory for Trumka as he heads into the AFL-CIO’s convention this September in Los Angeles. Trumka has been courting the UFCW since he first came to office in 2009, and he worked with the UFCW to coordinate campaigning for Obama during the 2012 election. This March, Trumka joined the UFCW in sharply criticizing the White House over a public-relations event trumpeting jobs for returning veterans at Wal-Mart (where the UFCW has launched a high-profile workers’ rights campaign, OUR Wal-Mart). Trumka blasted the event, saying: “That this effort was valorized by President Obama and Vice President Biden reflects an acceptance of economic failure out of line with America’s history or future. We owe it to our returning veterans to make sure they are treated as the heroes they are, rather than as symbols used to ‘greenwash’ Wal-Mart’s eroding brand.”

The return of the UFCW would not only boost the AFL-CIO’s membership by almost 10 percent, but also provide an infusion of resources. At the AFL-CIO’s current monthly rate of 65 cents per member, the UFCW’s dues would provide some 10 million additional dollars annually, allowing the AFL-CIO to expand its efforts at a time when its income is shrinking as a result of decreasing union membership nationwide.

Details of the negotiations between the UFCW and AFL-CIO are unknown at this time. However, inside sources say the AFL-CIO is likely to offer the UFCW some sort of deal, such as a discount on dues, as motivation to rejoin. The talks may also cover what areas of organizing jurisdiction the UFCW will have within the AFL-CIO, what AFL-CIO leadership positions will be assumed by UFCW officers and what political stances the AFL-CIO will take on issues the UFCW cares about, such as repealing portions of Obamacare.

Negotiations could also concern what type of resources the AFL-CIO will devote to campaigns important to UFCW, particularly the push to galvanize Wal-Mart workers via the OUR Walmart campaign, which has sent small groups of workers at dozens of stores across the country on intermittent strikes over the past year. Reunifying with the AFL-CIO could allow the UFCW to use the federation’s vast resources in the herculean attempt to change Wal-Mart’s workplace practices. However, the UFCW will still face tough opposition from the notoriously anti-union retailer.