Labor Weighs Whether or Not Immigration Bill is Worth Supporting 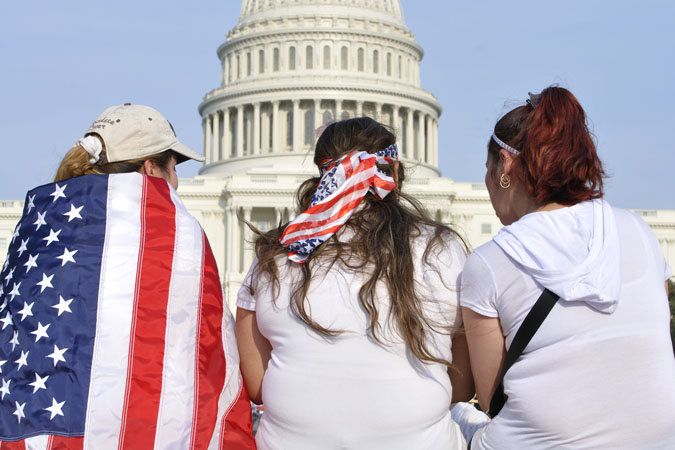 In the last two weeks, the AFL-CIO and other groups have set aside their misgivings and applauded the Senate’s passage of a comprehensive immigration reform bill. However, deep questions remain about whether the bill will ultimately benefit immigrant workers. Just as many in organized labor are criticizing the details of the Affordable Care Act, even though unions lobbied hard for its passage, some labor and immigrant-rights advocates who pushed immigration reform are beginning to question whether the Senate version of the bill will do more harm than good.

“As an advocate for working people regardless of their immigration status, it’s getting to be a difficult bill to accept despite the good things that are in there,” says Daniel Costa, director of immigration law and policy research at the labor-funded Economic Policy Institute. “It’s worth passing principally because of the legalization and citizenship provisions for the undocumented, and because the chances of Congress taking this up again soon and making it any better are slim...but I certainly wouldn’t criticize anyone for not being able to support it.”

Critics of the current version point to a number of punitive measures, most notably the requirement that undocumented immigrants who embark on the 13-year road to citizenship cannot go more than 60 days without employment. This could make workers less likely to speak up on the job or organize out of fear of being fired, which would put their immigration status in jeopardy.

Others worry that the fees involved in the process will make citizenship unaffordable for many immigrants. Costa of EPI calculates that immigrants would have to pay a minimum of $3,750 in fees during the path to citizenship. That’s not counting additional application-processing and the back taxes that some immigrants who worked under the table in the United States will be charged.

Some point out that the bill penalizes those who have provisional waiting status by, for instance, excluding them from the benefits of the Affordable Care Act, effectively keeping healthcare out of the reach of millions of immigrants as they wait to become citizens.

Advocates are also concerned about those left out of the bill. While an estimated eight million undocumented workers are estimated to initially gain legal status under the bill, another three million would not qualify, according to a Congressional Budget Office analysis. Those who remain undocumented are likely to be relegated even further to the shadows. For instance, they will find it more difficult to secure work as a result of expansion of E-Verify requirements under the bill, which requires employers to use an electronic system to determine all workers’ immigration status. Likewise, thanks to the bill’s provisions that dramatically increase spending on enforcement and militarize the border, these remaining immigrants would see even more resources poured into deporting them.

“They are saying that they are going to leave out a third of the population while fortifying the enforcement structure. This is deportation, not immigration reform,” says Arturo Carmona, executive director of Latino advocacy group Presente.org. “We can't in good conscience support a bill that is literally going to put millions of Latino immigrants in harm’s way. Millions of Latinos ... voted to stop deportation; they voted to protect families and keep them united; they sent a very clear mandate. It wasn't [a mandate] in support of President Obama; it was a rejection of Romney's ‘self-deportation’ [plan].”

Presente.org joins a small but growing group of immigrant and labor organizations that have turned lukewarm on the bill. However, organized labor as a whole is still heavily invested in passing immigration reform. The framework for reform that guided the Senate bill was shaped by intense negotiations between the Chamber of Commerce and the AFL-CIO. The talks culminated in a June press conference attended by both Chamber of Commerce President Tom Donohue and AFL-CIO President Richard Trumka, in which President Obama trumpeted the support for immigration reform across the political spectrum.

Arturo Carmona of Presente.org says that the heavy negotiations with big business and anti-worker groups like the Chamber of Commerce watered down the immigration reform bill’s effectiveness for workers by including provisions that make it more difficult for them to access jobs and healthcare. However, the AFL-CIO argues that these provisions are just the cost of getting a bill through a gridlocked Washington.

“This is all happening in this toxic political environment,” says Ana Avendano, the AFL-CIO’s director of immigration and community action. “There are a lot of trade-offs in this bill. Getting people into permanent [resident status] is a big victory. Getting green card holders to have access to naturalization is a huge victory.”

“[But] each of these steps has a huge cost and it’s the undocumented that are literally paying these costs,” she continues. “The cost is they can’t stay unemployed for 60 days. The cost is they won't have access to the Affordable Care Act. You are going to have U.S. citizen kids whose parents don't have access to healthcare. These are pretty significant costs given we are talking about population in lower rung of labor market. I think about the immigrant communities that are going to live with a much militarized environment. It’s a hard balance.”

Some worker advocates feel the 60-day requirement tilts the balance against the bill. “The Republicans are trying to seek ways to lock legalizing immigrants into substandard jobs and substandard working conditions,” says Chris Newman of the National Day Laborers Organizing Network. “There is no question that, in seeking the [60-day] work requirement, Republicans were seeking to make guest workers out of legalizing immigrants. For all the reason that guest workers programs are bad, these type of work requirements are very bad.”

Costa of the Economic Policy Institute says that many in labor are doing a similar calculus to determine whether or not they will support the bill.

“If advocates support it, I will assume it’s because they believe it improves the status quo, even if only slight,” says Costa “But that’s a judgment call everyone has to make for themselves, and based on what passed the Senate, it’s probably safe to say that it’s close to a 50/50 call at this point.”

Avendano and the AFL-CIO believe that ultimately, the Senate version of the bill is worth passing. Indeed, she says, it may help save the labor movement.

“It is easy to destroy workers rights by simply calling DHS. It is such a blunt tool and employers have free access right now,” says Avendano. “The crisis really calls for taking that away from them. Putting [immigrants] into legal status really takes that ability away from employers.”