Will Bangladesh Get Off the Hook on Safety Improvements? 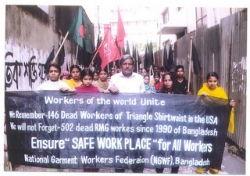 In this photo from 2011, Bangladeshi garment workers protest the high numbers of workplace deaths since 1990, even before the Rana Plaza tragedy took more than 1,000 lives.   (Derek Blackadder / Flickr / Creative Commons)

When the White House suspended Bangladesh’s preferred trade status at the end of June because of a string of fatal industrial accidents in the nation’s garment sector, labor groups and their allies took heart. They urged the U.S. to withhold restoration of the status until Bangladesh made serious improvements in enforcing workers’ rights and workplace safety.

Following the announcement, Rep. Sandy Levin (D-Mich.) and Rep. George Miller (D-Calif.) suggested specific improvements that should be prerequisites for the restoration of Bangladesh's preferred status:

Bangladesh must assure acceptable conditions at work, by enforcing its building and fire safety codes. It must afford workers the right to refuse to work in unsafe buildings, threatened by fire or collapse, without fear of blacklisting or loss of a paycheck. They must defend workers from employer retaliation and brutality if they try to register a union and collectively bargain. The government must end efforts to harass and frivolously prosecute those who try to help workers organize and exercise their rights. They must assure workers in Export Processing Zones have the same rights to freedom of association as those outside these zones. And, the government of Bangladesh must fully investigate and answer the question of who ordered the murder of Aminul Islam, a prominent worker’s rights advocate. When Bangladesh begins to take these fundamental steps, we are confident the U.S. will restore GSP benefits.

However, recent remarks by Bangladesh’s ambassador to the U.S., Akramul Qader, suggest that the Bangladeshi government is trying to convince U.S. officials that such measures aren't necessary.

At a Heritage Foundation event last Wednesday, the ambassador argued that reforms passed in the wake of the Rana Plaza collapse in April are sufficient to protect workers—although reporting by the New York Times calls this into question. These measures include increasing the ranks of government inspectors and reaching out to local universities for advice on how to improve safety practices, but do not include instituting independent inspections.

Qader also hinted that tougher U.S. trade sanctions against Bangladesh could feed the flames of religious radicalism in Bangladesh by creating a pool of a disgruntled, unemployed workers who could be easy marks for violent Islamist groups.

The ambassador's remarks echo talking points from U.S. retailers who subcontract in Bangladesh, such as GAP and Wal-Mart. They have incentive to oppose pro-labor reforms, which could raise the cost of garment production and threaten their bottom line. A group of 17 retailers teamed with the industry-funded Bipartisan Policy Center, headed by former Senate Majority Leader George Mitchell (D-Maine) and former Senator Olympia Snowe (R-Maine), to release their own safety plan, which calls for inspections to be voluntary. The plan has been blasted by critics for being too soft on both U.S. retailers and local garment-industry tycoons. But at the Heritage event—which, in what the Heritage Foundation’s Walter Lohman called a “coincidence” of timing, was held on the same day the plan was released—Ambassador Qader praised the voluntary inspection idea.

None of the speakers at the event—including Alyssa Ayres, a deputy assistant secretary in the State Department’s South and Central Asian Affairs Bureau—set clear guidelines or recommendations on what Bangladesh would have to do in terms of workers’ rights in order to gain back their preferred status.

When asked by In These Times whether Bangladesh would need to meet certain conditions in order to have its GSP status restored, such as independent third party monitoring of workplace safety conditions, Ayres said: "Uh, why don't we move on, I mean this is pretty specific, we don't, we, uh [...]" and declined to answer the question.

That exchange may come as little surprise to those familiar with the State Department. In an interview early in June about safety issues in Bangladesh, longtime workplace safety advocate Rep. George Miller told In These Times, “I always worry when the State Department [is involved] because they’re into everybody looking good when the agreement’s done, you know, ‘we met, we conferred, we had a frank discussion’—yadda yadda yadda. Things haven’t gotten better.”

Indeed, a recent story by Jim Yardley of the New York Times raises serious questions about the ability of Bangladeshi safety inspectors to effectively address safety problems even after the Rana Plaza tragedy. Even though Bangladesh has proposed expanding the ranks of its nationwide safety inspectors to 240, critics still say this is not nearly enough. Furthermore, they say that a byzantine regulatory approach that divides inspection responsibilities between governmental bodies and private trade association has lead to uneven inspections. Yardley notes that a building initially deemed unsafe (but then later declared safe) was only finally shut down after the Times itself inspected the factory’s ground floor.

Qader singled out Yardley’s reporting in particular as “inaccurate,” but declined to give details.

As Bangladesh tries to regain its GSP status, serious questions remain over how much things have really improved. Ostensibly, progress is being made right now: This week, Bangladesh's government passed a new series of laws that it claims will improve workers’ rights and make it easier for workers to unionize. Among other improvements, it bans the government from providing lists of workers who sign a petition calling for a union election to their employer.

However, critics say that the bill still does not meet standards outlined by the International Labor Organization.

“The government has not only missed a golden opportunity to get rid of provisions that limit workers’ rights, it has even snuck into the law new and harmful regulations,” said Human Rights Watch Deputy Asia Director Phil Robertson in a statement. “Even after Rana Plaza, the government still is not fully committed to the protection of workers’ rights and safety.”

While making it easier for some workers to organize, the bill also barred unionization by others, such as hospital and certain education workers. Additionally, the bill leaves workers in export processing zones still unable to legally join unions. The Bangladeshi government retains the right to stop a strike if they feel that it is “prejudicial to the national interest.”

For now, it seems that Bangladesh is certainly worried enough about its image that it’s willing to attack the credibility of the Times and Yardley.

A key question for the future is whether the State Department will buy the reassurances of Bangladesh and the U.S. retailers who operate there, or if it will indeed insist on specific conditions for restoring Bangladesh’s GSP status. Judging by Ayres' responses, a public answer to that question doesn’t seem forthcoming.