The Most Injurious Job in America 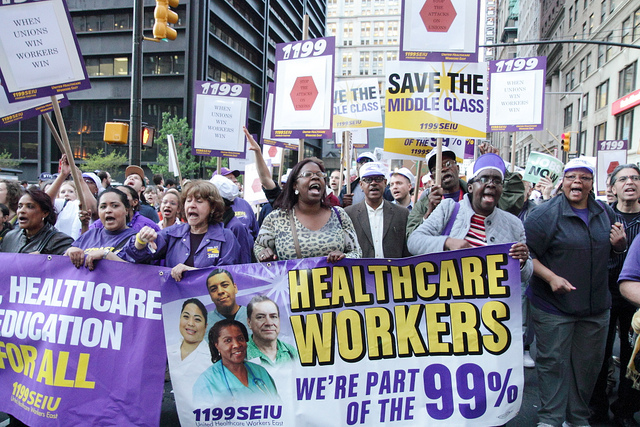 Healthcare workers, like these marching in Manhattan on May Day 2012, have an unusually high injury rate and little protection from OSHA.   (Paul Stein / Flickr / Creative Commons)

While hospitals are better known for treating injuries than causing them, statistics show that for workers, hospitals can be a dangerous place. A new report put out by Public Citizen found that in 2010, healthcare workers (including hospital staff) reported 653,900 workplace injuries and illnesses. That’s approximately 152,000 more (a 432 percent higher rate) than the industry with the second highest number of injuries—manufacturing—even though the healthcare sector is only 134 percent larger than the manufacturing sector.

Part of the reason that healthcare workers’ injuries may have flown under the radar is because of the type of injury involved. Unlike manufacturing and construction, where injuries are more likely to result in death, healthcare workers mainly suffer non-lethal musculoskeletal disorders. The rate of musculoskeletal disorders among workers in the healthcare industry is seven times higher than among other workers—a trend that Suzy Harrington, director of the American Nurses Association’s Department for Health, Safety and Wellness, calls “alarming.” Although these conditions aren’t fatal, if untreated, they can lead to permanent disability.

The most common cause of musculoskeletal injuries for healthcare workers is lifting patients by hand instead of using a mechanical device. Yet while ten states, including Washington, California and Maryland, have dramatically reduced injuries by passing safe patient handling laws, which mandate that hospitals "furnish mechanical lifting and transfer devices," no nationwide standard exists to protect healthcare workers.

Another major danger for healthcare workers is workplace violence. Workers in the healthcare sector suffer 45 percent of all incidents of workplace violence, and nursing home employees are especially affected, with seven times the average rate of injury from workplace violence. Violence in medical settings may arise from interactions with belligerent patients, who may be drunk, drugged or emotionally disturbed. Yet the Occupational Safety and Health Administration (OSHA) has never made a rule to require healthcare facilities to implement safeguards for their employees (such as metal detectors, security guards or even locked doors to isolate patients in guarded areas.) This is part of a larger problem: There are no federal OSHA rules requiring employers to ensure workplaces are safe from violence.

But workplace safety advocates say that OSHA’s particular lack of focus on the healthcare sector is symptomatic of the agency's slow response to the shift to a service-based economy.

“OSHA has not been able to keep pace with the way the economy has shifted over the last 20 years,” says Keith Wrightson, worker safety and health advocate for progressive watchdog group Public Citizen. “The economy has shifted away from one that is industrially-based to one that is service-based. They are hardly any rules that directly affect the healthcare industry. We counted them out and there are only nine rules, but if you look at construction and manufacturing, there are literally hundreds—and rightly so, those industries are highly dangerous.”

OSHA, for its part, insists that it is very concerned about safety in the healthcare industry.

“Employers have the legal responsibility to provide workplaces free of recognized hazards.  They must take ownership over this issue, and our role is to see that they do,” says Assistant Secretary of Labor for OSHA David Michaels. “OSHA has a variety of tools at its disposal to hold employers accountable for safety and health, and we are committed to improving safety and health conditions for our nation’s healthcare workers. Under this administration, OSHA has done more than any previous administration to address the issues that persist in this industry.”

In response to questions from Public Citizen, OSHA elaborated on these efforts, explaining that it has instituted recent programs “to encourage employers in hospital and healthcare facilities to reduce hazards. For example, Assistant Secretary for OSHA David Michaels launched an OSHA initiative to work with hospitals and nursing homes to recognize the close link between patient safety and worker safety.”

However, when it came to passing concrete rules regulating the musculoskeletal injuries that plague the healthcare industry, OSHA ran up against a major stumbling block: Congress. In 2000, OSHA passed a rule aimed at reducing musculoskeletal injuries by making employers adopt measures shown to reduce ergonomic injuries. But in 2001, a Republican-led Congress repealed the rule. OSHA has since attempted to use the general duties clause under the Occupational Safety and Health Act to cite employers whose ergonomic conditions present a clear danger to workers, but that poses a trickier legal case to make than if there was were a specific rule, and in the past two fiscal years OSHA has only done so seven times, according to the report put out by Public Citizen.

In response to questions from Public Citizen about whether or not the agency intended to issue a another ergonomic rule, OSHA said, “At this time, OSHA is not pursuing a rule on safe patient handling for healthcare workers. We continue to be concerned about this serious issue and promote sensible solutions through the  NEP [National Emphasis Program] guidance and outreach activities. However, OSHA does not have resources to move forward on all rulemaking necessary to address all the pressing workplace health and safety hazards.”

Rules, however, are only the first step. For instance, while OSHA has rules in place to prevent healthcare workers from being accidentally stabbed, they still suffer an alarming 400,000 stab wounds a year from surgical instruments and needles. Public Citizen’s Wrightston says that such injury rates are unnecessarily high because OSHA, with its limited budget of only $565 million, has few resources—and what resources it does have are not focused nearly enough on healthcare workers, he says.

“OSHA has devoted relatively little effort to addressing the safety risks in healthcare compared to other highly afflicted industries,”  says Wrightson. “For example, health care workers outnumber construction workers more than 2 to 1, but OSHA conducts only about one-twentieth as many inspections of health care facilities as construction sites.”

Indeed, statistics show that OSHA conducted 52,179 inspections of the construction industry in 2010, which employs 9.1 million workers and saw 74,950 injuries that caused workers to take at least one day off work. In comparison, last year OSHA conducted only 2,540 inspections of the healthcare industry, though it employs more than twice as many workers and saw 176,380 such injuries.

Some of the differential is due to the higher mortality rate for construction injuries, which cause five times as many deaths on the job. However, according to the Public Citizen report, “Even if fatalities were the only factor considered, healthcare inspections would need to be increased by about a factor of four to bring them into parity with construction sector inspections.”

Another gap in OSHA coverage, advocates say, was built into the agency’s NEP iniative, which was created in 2011 to focus on nursing home occupational safety—but not hospitals. “We want the National Emphasis Program to focus on hospitals. OSHA could do this right now with the swipe of pen,” says Wrightson. “The reason that they have not concentrated on hospitals is due to industry lobbyists.”

OSHA did not answer Working In These Times’ inquiries about why the National Emphasis Program (NEP) has not been expanded to target hospitals, but did point to its educational programs on workplace safety for hospitals.

Advocates insist, however, that Congress and OSHA must go beyond education to better enforcement and rulemaking in order to prevent injuries in the healthcare workplace. At the end of the day, advocates say, those that suffer the most from injuries to healthcare workers are patients.