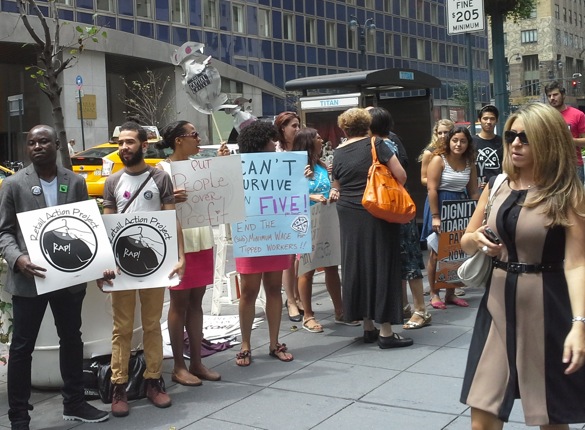 A group of about 20 well-dressed people huddled on a street corner at lunchtime in Midtown Manhattan, receiving last-minute instructions from a tattooed organizer in a Restaurant Opportunities Center United (ROC) shirt.

They were about to take part in a national day of action for a higher federal minimum wage, with rallies in 15 states and 22 cities. Targets include low-wage employers such as Wal-Mart, fast food restaurants, car washes, airports and other restaurants. The actions are focused on a push for the Fair Minimum Wage Act of 2013, introduced by Rep. George Miller (D-Calif.) and Sen. Tom Harkin (D-Iowa). This bill would raise the minimum wage to $10.10 and index it to inflation, and raise the subminimum wage for tipped workers as well.

But many of the worker organizations that joined today's action are interested in moving beyond just a minimum-wage increase—like Fast Food Forward, New York's wing of the national fast-food worker organizing campaign, which has consistently called for a $15-an-hour wage and union recognition for the workers. Today, at Fast Food Forward's festive rally in Prospect Park, surrounded by community supporters and elected officials, workers in the organizing committee announced that they will hold another citywide strike. They’ve already staged two high-profile walk-outs of workers from McDonalds', Burger King, Wendy's, KFC and other fast food restaurants across the city, which typically pay little more than minimum wage.

Meanwhile, ROC kicked off a new campaign today to abolish the "subminimum" wage for tipped workers in New York state. Currently, food service workers who make tips are paid $5 an hour in New York, under the assumption that tips will supplement their wages. Although the state’s minimum wage will go up to $8 in December of this year, the tipped minimum will not increase. Instead, the new minimum-wage law stipulates that the state Department of Labor's wage board will determine what the increase will be for tipped workers, a process that will take a while—so ROC is turning up the pressure.

At the midtown action, ROC and its community supporters targeted the Capital Grille, a restaurant owned by the multi-billion-dollar Darden corporation. In addition to alleged ill-treatment of workers at this particular restaurant, the parent company spent thousands of dollars lobbying against New York's recent minimum wage increase and helped water down important parts of the bill.

"We think they're a key part of why the tipped minimum wage wasn't increased," John Cronan, the ROC organizer directing today's action, told Working In These Times, noting that Darden spent money individually as well as through the National Restaurant Association to defeat the bill.

Outside the Capital Grille, a crowd chanted and handing out flyers detailing the workers' complaints against Darden and that location in particular. According to Cronan, complaints include discrimination—servers, who make the most money, are mostly white or speak without accent, while immigrant workers are relegated to busser status (they're called server assistants, Cronan said, but they essentially bus tables and make less money) even after working there for years and asking repeatedly for promotion. ROC has filed lawsuits against the company in multiple states, including New York, alleging wage theft.

Signs, chants and cardboard rats made the sidewalk outside Capital Grille colorful, but inside the restaurant appeared to be business as usual—for a while. Several groups of customers who'd had lunch reservations sat quietly at their tables, ordering only water, for thirty minutes, as management grew notably frustrated. Then they struck up a chant, “We can't stomach the injustice occurring in this restaurant!”

The modified sit-in ended with the “customers” getting up  for a “mic check,” accusing the company of denying its workers basic benefits like paid sick days and spending millions lobbying to keep the minimum wage low for all workers. They filed out in a row to join the protestors outside, chanting “Capital Grille, shame on you! Restaurant workers deserve fair pay too!” (They left big tips for the servers whose stations they'd occupied.)

“We definitely had the attention of all the other customers,” Miriel Manning, one of the ROC supporters, told Working In These Times. People passing by on the sidewalk, too, seemed curious about what was happening. No one had been asked to leave, Manning noted—unlike a civil rights sit-in, the idea had been to blend in as long as possible, take up space for as long as possible, and slow down the company's lunchtime business.

The action was coordinated with the workers at Capital Grille who are involved in ROC's campaign, Cronan noted. They determined it was time to escalate, as the chain has not changed its practices.

Outside on the sidewalk, Cronan led another mic check, proclaiming to the crowd that Darden, which owns Red Lobster and Olive Garden as well as Capital Grille, is the largest table service restaurant group in the world, and that they can clearly afford to pay workers a decent wage.