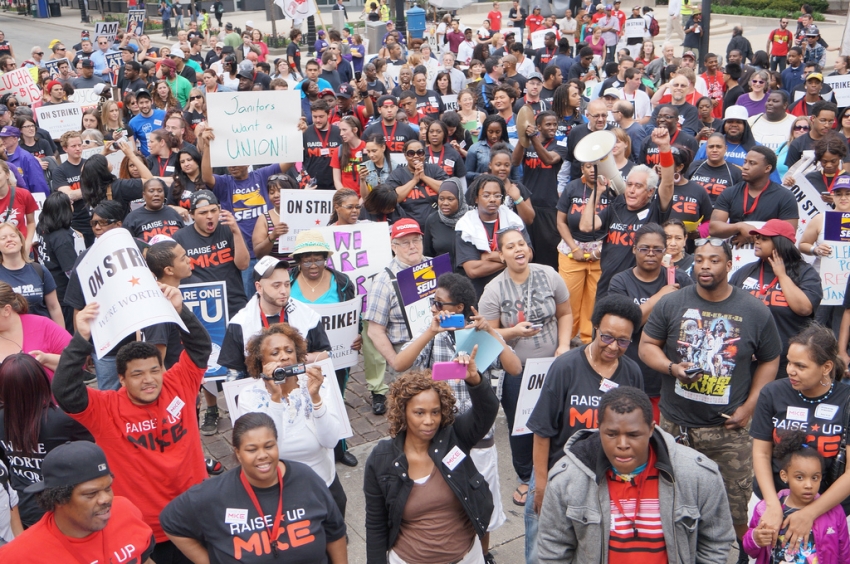 Early this morning, fast food workers in New York, St. Louis and Kansas City, Mo. launched strikes demanding both a wage increase to $15 an hour—from a median of $8.94—and the right to form unions without employer interference.

Later this week, workers in Chicago, Milwaukee, Detroit and Flint, Mich., will also go out on strike, expanding the reach of the movement of fast food workers (and, in Chicago, retail workers) that started with protests in New York and Chicago last year and grew into a series of one-day strikes throughout 2013. In Flint and Kansas City, strikes are taking place for the first time; in other cities, strikes will expand to target new franchises.

Organizers anticipate that thousands of fast food workers will join in the strikes, which coincide with heightened public awareness of wage stagnation and economic inequality. Some strikers may stay out longer than a single day.

The fast food strikes are part of a broader movement by low-wage workers for higher pay and union representation that has caught fire over the past year.

Targets include a range of employers, including Wal-Mart, federal subcontractors, warehouses, retail stores and car washes. Workers have typically formed loose local organizing committees that, with financial and logistical support from unions and community groups are growing into national networks, most prominently OUR Walmart.

This low-wage service and retail worker movement has tapped into a vein of discontent. But it has also created hopes for change through the fledgling campaign’s remarkable success with imaginative tactics.

“I’ve always dreamt about a moment like this,” says Terrance Wise, a 34-year old fast food worker and father of three in Kansas City. “But what am I going to do by myself? There’s strength in numbers. It’s a beautiful thing, a positive thing, that’s going to change this country. … My job should be a good job.”

Although he works long hours at his two part-time jobs—8 years at Burger King (now for $9.35 an hour) and 2 years at Pizza Hut (for $7.45)—and his wife also has a low-wage job as a home healthcare aide, Wise struggles to make ends meet. He recently lost his house to foreclosure and had to move in with relatives.

Overall conditions in the industry have not changed as a result of the movement, but some workers have won improvements. In Chicago, organizers say, workers at some McDonald’s and Macy’s locations received modest pay increases after the April strike. Dock worker Andrew Little, 26, said that managers raised pay from $9 to $11.26 an hour for him and his coworkers after they participated in the Chicago strike.

“I was honestly shocked,” he said. “We told ourselves it wouldn’t happen overnight. My first thought was the strike really did have an effect.”  But Little remains focused on his “main goal”: to form a union. “We want both a raise and to sit down with management and talk about how we can better serve the store and the store can better serve us,” he says.

As happy as he is with his raise, he is especially pleased that no striker was fired or disciplined. “That’s the best part,” he said.  Like other strikers, he returned to work accompanied by supporters—a dozen community representatives, clergy and organizers—who insisted that he should not suffer any retaliation. Workers have a real fear of being fired, Little says, but that can be prevented “if enough of us all stand up and demand respect.”

Not all employers responded positively, at least not at first. After strikes in St. Louis in May, some participating workers lost hours, pay, shifts or promised transfers, according to Jobs With Justice leader Rev. Martin Rafanan. But Jobs With Justice delegations went to the restaurants and talked with managers, corporate representatives or even, in one case, the corporate general counsel. “All of the cases were resolved in favor of the workers by the well-coordinated responses of community leaders,” he says.

There’s only one documented case of a striker being fired during this year’s wave of fast food job actions: Greg Reynoso, from a Brooklyn Domino’s. Fast Food Forward, the New York branch of the movement, responded by making his employer the first target of the current strike. On Friday, organizers report, 14 of 15 Domino’s delivery drivers did not show for work, effectively shutting down the operation on its busiest night. Meanwhile, roughly 60 supporters, including U.S. Rep. Nydia Velázquez (D-N.Y.), gathered outside the Domino’s to protest Reynoso’s dismissal.

The actions come at a time when issues of inequality and the minimum wage have taken the national stage. President Obama is on tour giving high-profile speeches on economic inequality, and a Hart Research poll shows that 80 percent of the public supports the proposal by Sen. Tom Harkin (D-Iowa) and Rep. George Miller (D-Calif.) to raise the federal minimum wage from $7.35 to $10.10 in three steps.

Fast-food workers’ poverty wages were spotlighted last week when everyone, from Stephen Colbert to The Atlantic, made sport of McDonald’s for unintentionally debunking its own claims that it provides a living wage. A model budget McDonald’s created for its workers recommended holding two jobs (which is tricky with fast-food jobs, which require workers to be available on-call) and included nothing for heating, far less for health insurance than the cheapest McDonald’s plan, and other fantasies. Implicitly, the budget showed what strikers know: it’s hard to make ends meet on less than $15 an hour.