Where Are Workers Most Underpaid: Apple, Wal-Mart or McDonald’s? 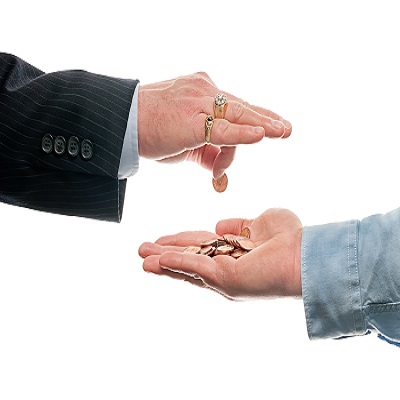 Apple, Walmart and McDonald's all underpay their workers, but who pinches the most pennies? (Copyright Leroy Harvey, 2013. Used under license from Shutterstock.com.)

Apple, Wal-Mart and McDonald's are among the largest corporate employers and profit-makers in the U.S., with a total of 2.6 million employees worldwide (1.6 million in the U.S.) and combined 2012 pre-tax profits of more than $88 billion.

All three companies pay the majority of their employees low wages: poverty-level wages. This is borne out by SEC data and the companies' own press releases. The only question is who gets away with the most profits while their employees are forced to tap into public money -- our tax money -- for food stamps, healthcare and other assistance.

Wal-Mart: Underpaying the most people

Wal-Mart employs about 2.1 million workers, two-thirds of them in the United States. Its 2012 revenue is three times that of Apple, and about 15 times that of McDonald's. The company claims its average full-time wage is $12.78 per hour. That's just under $26,000 per year. (IBISWorld says Wal-Mart pays associates $8.81 per hour.)

Based solely on its U.S. business, Wal-Mart makes over $13,000 in pre-tax profits per employee (after paying them), which comes to more than 50 percent of the earnings of a 40-hour-per-week wage earner.

A little-known fact about Walmart that impacts most of us: A study in Wisconsin by the U.S. House Committee on Education and the Workforce determined that a typical Wal-Mart store costs taxpayers over $1.7 million per year, or about $5,815 per employee.

Not mad enough yet? Four members of the Wal-Mart family made a combined $20 billion from their investments last year. Less than half of that would have given every U.S. Wal-Mart worker a $3 an hour raise, enough to end the public subsidy.

PayUpNow.org estimates that U.S. income per employee is approximately the same as the worldwide figure. As for franchises, which make up about 80% of worldwide stores and add well over a million employees to the global total, their sales totals are "not recorded as revenues by the Company," although franchise fees are included.

At fast food establishments like McDonald's, not only are workers poorly paid, they also have little hope for advancement. According to the National Employment Law Project, managerial, professional and technical occupations make up 31.1 percent of jobs throughout the U.S. economy, but only 2.2 percent of jobs in the fast food industry.

In summary, for the U.S. and around the world, McDonald's makes over $18,000 in pre-tax profits per employee (after paying them), almost 100% of the earnings of a full-time food service worker. The company's own employee budget recommends a second job to make ends meet.

Apple: Making a half-million per employee

Now for Apple. Like Wal-Mart  and McDonald's, the company pays extraordinarily low wages to its store workers, an average of about $12 per hour, or $24,000 per year for a full-time employee. In-store salespeople make up about half of the total workforce.

Apple, more than the other two companies discussed here, has numerous high-paying positions in engineering, design, programming, marketing, etc. Reports by two independent salary trackers indicate that the overall average salary at Apple is about $50,000. Even with this much higher figure, Apple pays its U.S. employees only $1 for every $8 in profits.

So who's the biggest wage stiffer? Apple is by far the worst in rewarding profitability. But Wal-Mart underpays the most people, and McDonald's pays the lowest wages. For those of us who subsidize these companies with tax dollars for their employees' food stamps and Medicaid, it doesn't matter who's worse. We're all getting stiffed.

This article was reprinted from Alternet.org.

Paul Buchheit is a professor with City Colleges of Chicago and co-founder of Global Initiative Chicago. He is the editor and main contributor to the forthcoming book, American Wars: Illusions and Realities (Clarity Press).