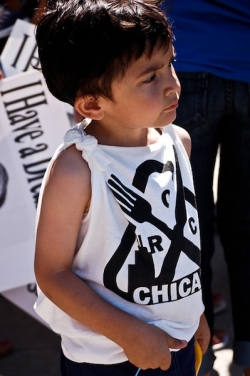 Worker centers and other non-union labor organizations have grown immensely over the past two decades, with some in the labor movement hoping their growth will help revive a moribund labor movement. It was perhaps inevitable, then, that the same forces working for decades to destroy unions are now launching an attack on worker centers.

The Center for Union Facts (CUF), an anti-union advocacy organization funded by corporations, took out a full-page ad in the Wall Street Journal last week claiming that worker centers—traditionally understood as non-union community organizations supporting and organizing low-wage, often immigrant workers, such as the New York Taxi Workers Alliance or the Restaurant Opportunities Center United—are little more than front groups for unions. “Big labor unions are trying to disguise themselves as ‘worker centers’ to push their organizing and political agendas,” the text reads.

The ad followed two articles in the paper, one detailing the work of such organizations—what labor journalist and In These Times contributor Josh Eidelson has dubbed “alt-labor” groups—alongside unions in the car wash industry in New York City, the other noting a letter by two Republican members of the House of Representatives encouraging Secretary of Labor Thomas Perez to issue a ruling on whether such groups are subject to the same financial disclosure requirements as unions.

It’s probably no coincidence that the attacks on alt-labor groups have stepped up just as such groups are receiving a surge of attention. Organizations like worker centers have been growing since the 1990s, but the recent strikes against fast food and retail companies under the Fight for 15 campaign and Wal-Mart under OUR Walmart have put non-union labor organizing on the map—and in the crosshairs of labor’s enemies. The AFL-CIO has become increasingly willing to aid development of such organizations, extending a union charter to the New York Taxi Workers Alliance and signing partnership agreements with the National Domestic Workers Alliance, the National Guestworker Alliance, and the National Day Laborer Organizing Network.

Worker centers and alt-labor groups interact with unions in widely different ways. Some, like Working America, are direct projects of unions or labor federations; others, like Voces de la Frontera (VDLF) in Milwaukee who helped lead the Palermo’s pizza strike, are independent of unions but sometimes work closely with them; others view unions with near-open hostility. This range seems to escape the CUF, whose ad lumps all worker centers into the same broad category as fronts for unions. (Full disclosure: I am a former organizer for a worker center run by Arise Chicago, a faith-based worker rights organization.)

Janice Fine, an associate professor in the School of Management and Labor Relations at Rutgers, says the accusation leveled in CUF’s ad that worker centers are actually stealth unions is “ahistorical.” For her 2006 book, Worker Centers: Organizing Communities at the Edge of the Dream, Fine conducted surveys and in-depth case studies of multiple worker centers. “Only a very tiny percentage grew from [unions],” she says, describing the “completely different DNA” of organizations that grew from ethnic institutions, nonprofits, legal services, and religious institutions.

Mark Brenner, director of Labor Notes, a labor reform organization that has pushed for increased transparency within unions, notes that like any nonprofit, worker centers already must file 990s, the annual required tax report for nonprofits. The real motivation to reclassify worker centers as unions is to allow bosses to attack worker centers with the same ferocity they currently use to attack unions, he says.

“The fact that right-wing forces are trying to classify worker centers as labor organizations like unions is further evidence that they recognize how totally skewed labor law is towards employers and how hamstrung unions are under the law,” Brenner says.

Restaurant Opportunities Centers United (ROC), a restaurant workers organization with ten affiliates in major cities around the country, faced similar attacks from restaurant owners targeted with lawsuits for wage theft and discrimination in New York City. The Fireman Hospitality Group, owners of eight high-end New York restaurants, responded with a countersuit alleging, among other things, that ROC “act[ed] as a front for a local union.”

The National Labor Relations Board eventually ruled in ROC’s favor. But Teófilo Reyes, the organization’s program coordinator, says he is not surprised similar attacks are being leveled at organizations like his.

“Workers centers are doing effective work, so corporate interests are looking to stop them,” Reyes says. “They want to maintain the status quo of low wages and expanding inequality.”

While the CUF’s ad attacked worker centers generally, it did not call specifically for worker centers to disclose their finances as unions do—likely because CUF itself is known for failing to disclose who its donors are, and pays the bulk of its budget to Richard Berman, the group’s executive director, and his research and communications firm, Berman and Company. Berman runs 23 different groups defending corporate interests, according to an anti-Berman site run by the liberal nonprofit Citizens for Responsibility and Ethics in Washington—including one organization devoted entirely to attacking ROC.

The attacks on alt-labor groups are unlikely to go away anytime soon. But when asked whether he is worried, ROC’s Reyes seemed nonchalant.

“This is what [groups like CUF are] set up to do: protect corporate interests around the country,” Reyes says. “But our work speaks for itself.”