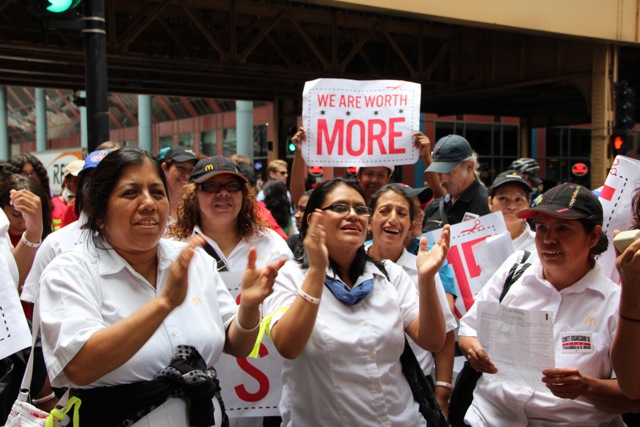 Workers rallied outside a downtown Chicago McDonald’s on Thursday, joining a nationwide wave of strikes demanding better wages and conditions at fast food and retail outlets. (Photo by Kari Lydersen)

Chicago workers continued the roving fast food and retail strike Thursday, joining strikers and picketers around the nation calling for increased wages and better working conditions for the thousands of low-wage workers who staff some of the nation’s largest companies but are not paid even enough to scrape by.

A crowd of workers and supporters sporting employee uniforms or red “Fight for 15” t-shirts—referring to the call for a $15 hourly wage—snaked through downtown streets all day, stopping to rally outside businesses, ranging from fast food outlets such as McDonald’s, Wendy’s and Chik-Fil-A to more expensive stores like Nike, Macy’s and Victoria’s Secret. Pharmacies, delis, health food stores and beauty salons were also on the route.

The mood was celebratory. Many workers said they had gotten raises, better schedules, more hours and better working conditions since the April 24 strike by the Workers Organizing Committee of Chicago (WOCC) union. While the union doesn’t have any contracts with employers or even official collective bargaining power, it has already leveraged the power of public pressure to gain concessions from major businesses. It is supported by a wide range of labor unions and community groups, as Jeff Schuhrke reported yesterday for Working In These Times.

Krystal Maxie-Collins, 29, says that, about a week after the April protest, she was promoted from part-time to full-time and got a raise from $8.25 to $8.50 an hour at her job at Macy’s. A mother of four, she said it is nearly impossible to make ends meet on retail wages that hover at or just above the state minimum wage of $8.25.

“You have rent, gas, lights, just the cost of living in Chicago,” she said. “Even being able to go to lunch and participate in society here in Chicago, you need more than $8.50 an hour. You should be able to afford to shop where you work, but I can’t do that unless there is a 60 percent off sale. It’s hard to even buy personal necessities. We’re not talking about wanting to get rich. We just want to get by and take care of ourselves.”

Outside one of downtown Chicago’s numerous McDonald’s franchises, one worker after another called in Spanish and English for higher wages.

Robert Wilson, 25, described working for a McDonald’s at Water Tower Place for seven years and getting only a single, 10-cent-per-hour raise. He finally got a 25-cent-per-hour raise after Black Friday last year, thanks to the retail-fast food workers movement, he tells Working In These Times.

Wilson described to the crowd how he has worked 15-hour days at two different stores when McDonald’s managers were in a pinch.

“It’s a shame to know I’ll give that kind of dedication to work, and not even receive paid sick days or a steady schedule, and have to negotiate for days off when I have an emergency,” he said. “We work too hard for this company to back down…we’ll keep fighting until we get what we deserve.”

The crowd went into the restaurant to try to deliver a petition, but police officers ordered them out.

“They’re just trying to raise the minimum wage,” said Monica A., 20, a passerby who saw the workers earlier in the day outside a Walgreens and, sympathizing with their message, decided to continue walking with them.

“$8.25, you can’t do anything on that, especially after they take taxes out and everything,” said Monica, who declined to give her last name.

McDonald’s unintentionally gave the fast food workers movement a boost last month when it published a sample budget for workers that was apparently meant to help them manage their money but instead highlighted for the country how nearly impossible it is to survive on their wages. The budget included a “second job” and even so did not cover realistic living expenses. Health insurance was penciled in at $20 a month, heat (in an earlier version) as “$0,” and gas and child care were not included at all.

It’s not only employees serving customers at private companies who make such low wages. Grace Hill works in the kitchen at Homewood-Flossmoor high school in the south suburbs, earning $9.87 an hour. Even as she makes healthy food for the students, she told Working In These Times, she can’t afford to buy healthy food for herself—a particular problem since she is diabetic.

“Half the time I can’t pay all my bills,” she said. “The school does have the money, they just aren’t giving it to us.”

Union employees of the Chicago Public Schools, including teachers, janitors and food service workers, were on hand to support the Fight for 15.

“Like all movements, it starts small, and then it will grow,” said Eric Ortega, 30, who works as a prep cook on Navy Pier.

Campaign organizer Deivid Rojas said it’s clear the movement has already made an impact and will continue to do so.

“We’ve had workers having victories in all kinds of ways,” he told In These Times. “They’re getting raises of $1 or $2 an hour, or moving from part time to full time. People have more predictable scheduling and report being more respected at work, by their managers and their co-workers.”