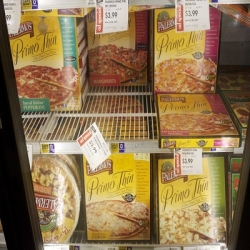 Labor activists and supporters of the strikers are fighting to get Palermo's pizzas off as many shelves as they can.   (David DeHetre/ Flickr / Creative Commons)

The 14-month-long strike at Palermo’s Pizza in Milwaukee produced a small slice of justice this week for the Mexican immigrant workers who have been fighting for higher wages, safer conditions and a union voice at the frozen-pizza maker.

Last Tuesday, Palermo’s finally agreed to comply with a finding by the National Labor Relations Board and re-hire eight workers with back pay, which will cost the pizza chain tens of thousands of dollars. The eight had been illegally fired for trying to unionize, the NLRB ruled.

Palermo’s has also agreed to post a notice announcing that the firm will no longer violate federal labor law. “This agreement confirms that Palermo’s used threats, intimidation, surveillance, discrimination, and retaliation to deny the freedom to choose a union voice,” says Raul de la Torre, an organizing committee member of the Palermo’s Workers Union. Fully 75 percent of the workers signed cards seeking union recognition prior to the strike, but Palermo’s management responded only with threats and other illegal tactics.

But Palermo’s decision to comply with the NLRB ruling does not reflect a softening of the intransigence that has driven about 125 workers, almost all immigrants from Mexico, out on strike for over a year. Palermo’s has refused for months to even engage in bargaining, said spokesperson Brian Rothgery of the United Steelworkers (USW) union, which has been assisting the Palermo’s strikers since they walked out on June 1, 2012.

Low pay, hazardous working conditions and arbitrary management decisions drove workers to form a union with the help of the immigrants-rights group Voces de la Frontera, which has been vocal and visible force in Wisconsin for the rights of immigrant workers.

Voces, the Palermo’s Workers Union and the USW are preparing to intensify their boycott of Palermo’s frozen pizzas at stores and institutions across the nation, said Rothgery. This escalation of the boycott will mean a focus on getting Palermo’s products removed from universities and on the Costco chain, which accounts for half of Palermo’s sales.

USW District 2 Director Mike Bolton called the settlement for the eight workers a positive development, but expressed exasperation with U.S. labor laws that allow a firm like Palermo’s to thwart the democratic choice of workers to form a union.

“It took much too long to get even this small bit of justice for these workers,” Bolton tells Working In These Times. “And unfortunately, they will be going back to jobs where union busters have created such an atmosphere of fear and intimidation that a democratic election is not possible.”

“The American system of labor laws has failed for most of the Palermo’s workers,” says Rothgery. “But that doesn’t mean we’re going to stop. The boycott is continuing, and we’ll keep fighting until there is justice for all the workers at Palermo’s.”

The workers and their allies will need to puncture the stone wall that has been Palermo’s response to the onslaught of community protests and legal challenges. Palermo’s refused to accept a letter from clergy and other community leaders following their 18-mile pilgrimage from Palermo’s plant to the palatial suburban home of Palermo’s co-owner Giacomo Falluci on June 1, 2013, the one-year anniversary of the strike.

Meanwhile, Palermo’s still faces various federal charges of both tolerating safety hazards and breaking labor-relations laws. Palermo’s is contesting seven “serious” charges filed May 7 by the Occupational Safety and Health Administration that its handling of nearly 30,000 pounds of anhydrous ammonia—used in freezing food—was unsafe and posed a severe safety hazard. Palermo’s faces $38,500 in fines from OSHA.

The penalties reflect the threat posed by a potential accident. The Environmental Protection Agency estimates that a one-minute accidental release of 1,000 pounds of ammonia would spread toxic fumes 1.2 miles in an urban area.  A release of the full 29,500 pounds could travel six miles. The Milwaukee Brewers’ major-league baseball stadium, with a seating capacity of 42,200, is just 1.3 miles west of the Palermo’s plant.

OSHA also requested that the frozen-pizza company turn over uncensored records of worker injuries and other safety problems, after Palermo’s submitted information with key information redacted.

Until finally conceding on the one NLRB complaint, Palermo’s had refused to comply with the NLRB order issued last November. Palermo’s management and its advisors—which include the Chicago-based anti-union Jackson Lewis law firm and the PR firm of prominent local Democrat Evan Zeppos–seemingly want to project a message that the firm is impervious to any form of pressure, and thereby demoralize the workers and their supporters, say supporters of the strikers.

“They want to flaunt their impunity, “ explained Christine Neumann-Ortiz, director of Voces de la Frontera, the influential immigrants-rights group which has reinvigorated Milwaukee’s long tradition of May Day marches—dating back to 1886--by assembling tens of thousands of immigrant workers and supporters. Zeppos has attacked Neumann-Ortiz in harsh terms for supposedly discouraging business development: “I’ve talked to businesses who say, ‘Why should I move to the valley when that’s happening?’ She has hurt the city, she has hurt those workers, and she has hurt herself. She’s become toxic property.”

Palermo’s has managed to replace the striking workers with “scab” replacement workers. Many of these replacement workers were hired through the BG temporary agency, which faces its own set of charges issued by the NLRB—including a contingent of refugees from Myanmar (until recently, a nation wracked by dire poverty ruled by an extraordinarily brutal military dictatorship). A 21 year-old refugee suffered the loss of three fingers in an accident at the plant.

Palermo’s stance has been reinforced by the overtly pro-corporate and anti-union administration of Gov. Scott Walker, especially the scandal-wracked Wisconsin Economic Development Agency, which has been willing to overlook the company’s failure to provide family-sustaining wages as promised in exchange for state grants. Wages at Palermo’s have fallen far short of the $12 an hour target set a full decade back in 2003 by the Menominee Valley Partners, a joint public-private initiative, when a plan was laid out for the area, which had been vacated by many large employers. One Palermo’s worker reported that she made just $9.30 an hour after 10 years at the plant.

Total taxpayer subsidies to Palermo’s—from city, state, and federal sources—have totaled $48 million, according to an updated version of an AFL-CIO report called “Too Much Pork in the Pepperoni.”

Despite Palermo’s failure to meet its obligations to taxpayers, the company has found allies in the Milwaukee area’s top Democratic leaders. County Executive Chris Abele, who both gained office with labor support, openly aligned himself with Palermo’s in an op-ed shortly after the dispute started. For his part, Mayor Tom Barrett issued a deceptively neutral-sounding call for a “fair and timely” union representation election late last November, in a statement describing Palermo’s as “a valued corporate citizen.” But holding elections under the prevailing conditions would mean that the Palermo’s strikers would be shut out of the election while replacement workers would constitute the voters, noted Neumann Ortiz.  “They [Palermo’s and Barrett] only want an election where the voters would be hand-picked,” she pointed out.

But has been extensive support for the workers around the state and in the local community—as exhibited by the clergy-led 18-mile walk to protest Palermo’s practices. At UW-Madison, students held a sit-in ON April 29 at the office of Chancellor David Ward and won a halt to the university’s licensing deal with Palermo’s, under which the UW receiveD about $200,000 for promoting Palermo’s pizzas with a “Bucky Badger” logo.

Some Wisconsin Democrats, like state Rep. Jon Richards, have been actively demanding records on Palermo’s failure to provide the quality jobs needed to comply with the terms of its subsidies. Several County Board and City Council members have also been outspoken in their support of the strikers.

Meanwhile, labor activists nationwide are pressuring chains like San Diego-based Costco to stop carrying Palermo’s pizzas until workers’ rights are honored. While Costco has marketed itself as a humane alternative to Wal-Mart’s infamous low-wage and unashamedly brutal disregard of worker suffering, as with victims of factory disasters in Bangladesh for whom Wal-Mart has denied any responsibility, Costco has thus far refused to budge on selling Palermo’s pizzas  produced under harsh conditions closer to home.

With Palermo’s concession n the rehiring of the eight workers and acknowledgement of labor-law violations, the Palermo’s strikers and their allies see a small step forward. The boycott campaign gains ammunition at universities with strong policies on labor rights.

But until a breakthrough occurs to cut significantly into Palermo’s sales, Palermo’s seems intent on maintaining a hard line against the strikers. Image-conscious Costco, with 449 warehouse-style stores across the U.S., may prove to be the crucial target if Palermo’s workers are ever to win justice.