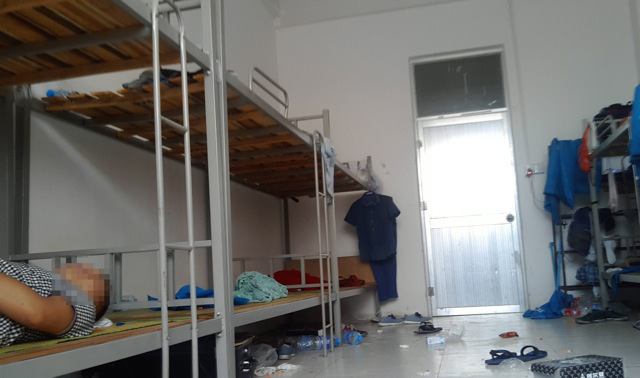 The workers' dormitories are often dirty and cramped, with eight to 12 workers in a room and often inadequate sanitation facilities, according to the China Labor Watch report.   (Courtesy of China Labor Watch)

Apple's growth and reputation for innovation have long been built on the shaky foundation of rock-bottom wages and poor labor conditions in Chinese factories. Now, a new investigation by the New York-based advocacy group China Labor Watch has further revealed the abuses, including wage violations and chemical exposures, at the warped core of Apple's corporate empire. The report focused on Apple supplier the Pegatron Group, which has become a major producer of an upcoming new model for a scaled-back “cheap iPhone” for lower-end markets.

The most infamous of Apple's labor problems were the widely reported the Foxconn suicides of 2010--when several workers at the Taiwanese-owned Apple contractor's mega-compounds in China threw themselves from buildings in despair over their working conditions. Apple has since waged a highly publicized campaign to raise labor standards and wages at supplier factories.

Pegatron—a smaller company, with a mere 70,000 employees, though it counts among its clients not only Apple but also Dell, HP and Microsoft—has avoided the kind of negative publicity that Foxconn garnered. But CLW’s research on three Pegatron workplaces, two in Shanghai and one in nearby Suzhou, suggests that labor exploitation is hardwired into the entire production model for brand-name electronics manufacturing in China.

The report, based on field investigations and interviews with employees, found that workers at Pegatron still facing grueling conditions. Work shifts typically run about 11 hours, with an hourly wage of about $1.50. At the three factories investigated, according to the report, “average weekly working hours... are approximately 66 hours, 67 hours, and 69 hours.” At the same time, Apple has claimed “its suppliers had achieved 99 percent compliance with Apple’s 60-hour work week rule.” (In fact, China’s standard workweek is technically just 49 hours, but workers are typically pressured to work excessive overtime.)

The dormitories examined were often filthy and crowded, cramming eight to 12 workers in a room, sometimes with inadequate sanitation facilities. Workers reported being denied adequate safety training and gear, even when their job exposed them to chemical hazards.

Some categories of workers are especially marginalized, according to the report. Student “interns” are effectively shorted on wages due to deductions taken by their schools. Meanwhile, precarious “dispatch” workers, lacking the benefits and protections of regular employees, may be hit with sharp wage cuts if they do not complete their temporary contract terms.

Regulating behavior is key to maintaining "discipline" on the assembly line. Managers reportedly fined workers for activities such as “failing to tuck in one’s chair after eating, failing to eat at predetermined times, and absence from unpaid meetings.” Pregnancy can drive women out of the job due to the stressful conditions, or because the management determines that under China’s strict family planning regulations, “a woman does not have a birth permission document or became pregnant out of wedlock.”

The report charges that the harsh conditions at Pegatron are “violating a great number of international and Chinese laws and standards as well as the standards of Apple’s own social responsibility code of conduct.”

In a public response to CLW’s research, Apple expressed surprise, while Pegatron vowed to investigate the charges and stated, “We strive to make each day at Pegatron better than the last for our employees.”

Apparently many Pegatron workers decide that the way to make tomorrow better is just not to return to work. Noting the frequent turnover at the Suzhou Pegatron facility AVY Precision Electroplating, CLW found, “In a period of two weeks, 80 of 110 new recruits at AVY left, presumably unwilling to accept the work intensity, low pay, living conditions, and harsh management style characterizing the facility.”

The pressure to produce nonstop is linked directly to Apple’s dictates and massive orders. At Pegatron’s Riteng factory, workers were “expected to assemble 2,600 Apple laptop covers per day. Workers responsible for the placement of Apple logos on computer covers have a quota of 100 per hour per worker. Workers in the laser facility are expected to press 600 computer covers every hour.” Missing a quota means adding more overtime or risking reprimand. Beyond Apple, CLW has observed this pattern of labor exploitation in various high-profile brands, including Samsung and Motorola.

While Apple boasts that it monitors its suppliers closely, investigators say bosses at Riteng are adept at evading labor auditors: "The factory will prepare for these visits, telling workers to be neat and orderly, not to speak to the visitors, and to work a bit slower in order to ensure the quality of the products during the inspections."

Since China lacks an independent labor organizing infrastructure, workers also faced heavy obstacles to challenging abuse grievances individually. At Riteng, many appeared unaware they were supposed to be represented by the official state union. The management “does not post or distribute any information about mechanisms that workers can use to protect their interest or make complaints,” according to the report. CLW Program Coordinator Kevin Slaten tells In These Times in a follow-up correspondence, “At Pegatron Shanghai, workers do not even know the location of the union office, let alone knowing how to seek help from it.”

One of the most troubling trends is that Apple is letting suppliers making Apple products, such as Foxconn and Pegatron, compete for Apple orders without ensuring that these suppliers' conditions first meet legal and Apple's own standards. Unless Apple places labor conditions on par with production price and speed, then it will continue to give large orders to abusive factories.

The chain of abuses that investigators traces through China’s electronics industry rests upon two powerful silences. In factories, workers are silenced by wilful neglect of managers as well as the failure of international regulations. And for Western enthusiasts of Apple products, the hollow promises of "social resposibility" issuing from Apple’s marketing headquarters and the seductive hum of a digital universe mute our consumer consciences.