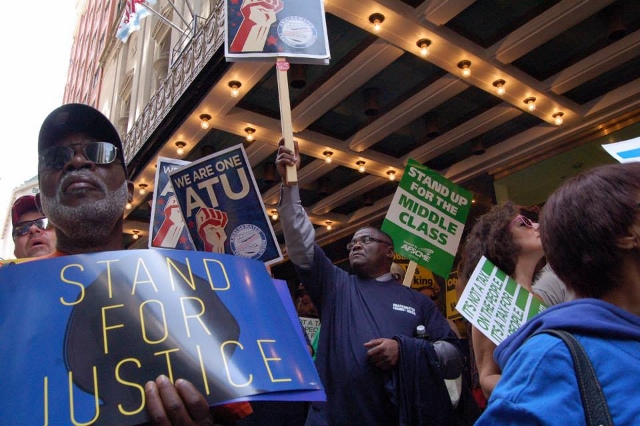 Union members rally outside the Palmer House Hilton in downtown Chicago, where ALEC is holding it's annual conference. August 8, 2013. (Photo from Chicago Federation of Labor)

This week, the American Legislative Exchange Council (ALEC) is holding its 40th annual conference at the Palmer House Hilton in downtown Chicago, where state legislators and representatives of some of the world’s most powerful companies have come together to discuss policy issues from the environment to education to labor—with the underlying goals of increasing privatization, curbing organized labor and limiting the federal government.

At conferences like the one going on in Chicago, which began on Wednesday and will continue through Friday, ALEC members vote on adopting model legislation that legislators then introduce in statehouses around the country. That legislation includes bills that pre-empt living wage ordinances, promote “school choice,” ban local and state-level environmental protections, and generally promote privatization and corporate profits while pushing to reduce the size of government.

While at one time ALEC flew under the radar, with little public awareness of its operations or members, in recent years a wide coalition of labor, independent media, environmental and civil rights groups—including In These Times—have exposed ALEC’s machinations and pressured legislators and corporations to break their ties with the group. In Chicago, conference attendees were met by thousands of protesters from a wide range of unions, community and watchdog groups, including the Chicago Teachers Union, the Illinois Hunger Coalition and the community-labor coalition Stand Up! Chicago.

On Wednesday night, Common Cause Illinois hosted a screening on Bill Moyers' documentary The United States of ALEC, followed by a panel discussion featuring labor and civil rights leaders, including  Rey López-Calderón, executive director of Common Cause Illinois. López-Calderón has a background in philosophy, law and community organizing, so he sees ALEC through a long lens. At the panel, he described ALEC as being akin to the Greek plutocracy who paid lip service to democracy while actually leveraging their power and wealth to control the government.

ALEC has said that about 1,000 of its model bills are introduced each year in state legislatures, and about 200 are passed. Yet despite ALEC’s intense lobbying and legislative efforts, it is registered as a nonprofit “educational” organization that is exempt from taxes and able to accept tax-deductible donations. In April 2012, Common Cause filed a complaint with the Internal Revenue Service opposing ALEC’s nonprofit status. Also in 2012, a group of Ohio ministers filed another IRS complaint penned by the former chief of the IRS' nonprofit corporations division. The challenges are still pending.

“[ALEC’s] activity should not be tax exempt,” said López-Calderón. “You should have to disclose it—not write it off and externalize your costs to the taxpayers, to us.”

When it was founded in 1973, ALEC was meant to bring right-wing Christianity into government, mostly at the federal level. But over the years, the overt religious mission dropped away, and the group became fixated on working at state and local levels.

In the documentary, former Wisconsin state representative Mark Pocan (D-Madison) describes ALEC as “a corporate dating service for lonely legislators.” Pocan paid $100 to become a member of ALEC in order to learn more about the group, which included attending conferences like the one in Chicago, where legislators were “wined and dined” by top corporate executives who pay $25,000 for membership. “Unfortunately, what’s excluded from that equation is the public,” Pocan says in the documentary.

According to López-Calderón, promoting charter schools, online “virtual schools” and privatized education—without union teachers—has been one of ALEC’s major “stealth” efforts. He noted that they’ve cagily managed to gain much public support for this position even in a heavily Democratic city like Chicago.

“One of their education functions is to convince the public that [ALEC's] work is in their interest… That states need to be more competitive,” López-Calderón said. “A lot of people in our communities have been convinced that because some schools are doing so poorly, anything will be better. [ALEC has] gone out and said [that] charter schools are going to help black and latino communities and anyone who is against that are just racist.”

“It’s not about what’s going on in the classroom, it’s about trying to marginalize us,” said Robert G. Reiter, secretary treasurer of the Chicago Federation of Labor, at the Chicago panel. “Teachers unions don’t just fight for the people they represent, they fight for everybody. … What they’re trying to do is take power away from labor because labor fights to raise the middle class.”

Almost 50 corporations have publicly split with ALEC in recent years thanks to strategic campaigns, including by the online civil rights group Color Of Change, which has organized particularly around ALEC’s voter identification and “Stand Your Ground” model legislation. At the Chicago panel, Color Of Change executive director Rashad Robinson described how the group successfully pressured Pepsi, Coca-Cola, Kraft and Johnson & Johnson to break from ALEC.

“We had one strategic insight: 98 percent of ALEC’s funding came from corporations, and corporations every day came to black folks and said, ‘Buy our products and use our services,’ ” said Robinson. “At the same time, they’re having this secret relationship with ALEC, hurting our community.”

Robinson said that more than 80,000 people signed a petition denouncing corporate support for ALEC-backed voter suppression laws. Then Color Of Change showed Coca-Cola a mock-up of a flier exposing their involvement with ALEC, and "gave them a chance to pull out behind the scenes," said Robinson. "We gave them 48 hours.” When Coca-Cola missed the deadline, Color Of Change members started telephoning the company. About six hours later, Robinson said, Coca-Cola called him and pledged to split from ALEC.

Experts on the panel and in Moyers’ documentary noted that even companies that publicly dumped ALEC may still be involved in discreet ways—for example, serving on committees or attending meetings that aren’t publicized—and thus the ALEC watchdogs can’t let down their guard.

“Our fight with ALEC is not over,” said Robinson. “We can win. We can leverage our moral authority and our organizing and fight back against powers that put our communities in harm’s way.”