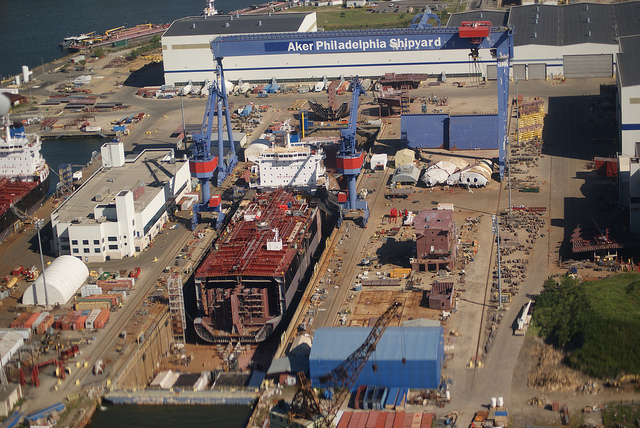 Unionized workers at Aker Philadelphia Shipyard breathed a collective sigh of relief late last week with news that an agreement to build as many as eight new oil tankers has been finalized. The investment, estimated to be worth $1 billion, should keep the yard humming for the next four years.

The contract to build the new ships means that some 1,000 workers will continue to be regularly employed beyond next year, when the yard will complete most work on two crude oil tankers now under construction for a shipping subsidiary of ExxonMobil Corp. Recent years have seen some lean times at the shipyard, with employment falling to 400 as recently as 2011 when new orders for vessels were hard to come by, says Aker spokesperson Kelly Whittaker.

“It’s feast or famine in this business, so we’re really happy they [Aker] got the contract,” says Phillipp J. Evans, a regional representative for the International Brotherhood of Boilermakers, Iron Ship Builders, Blacksmiths, Forgers & Helpers. The Boilermakers union represent about two-thirds of the workers at the Aker yard, Evans estimates, with the remainder represented by local units of 10 other unions organized into the Philadelphia Metal Trades Council.

The Aker Philadelphia contract is welcome news also because it confirms a national rebound in commercial tanker construction, adds Ron Ault, President of the AFL-CIO’s Metal Trades Department (MTD), which represents unionized shipbuilders around the country. In May, shipyard employees in San Diego got a similar boost when a company called American Petroleum Tankers signed a contract for new vessels at the General Dynamics NASSCO yard there. Some 800 workers are expected to be hired to complete that contract, according to a NASSCO statement.

Rumors are rife that there are further tanker orders in the offing, most of which are related to an unusual rise in the U.S. production of crude oil, Ault says. Increased shale oil drilling—largely in the Bakken region of North Dakota and the Eagle Ford geologic formation in Texas—are flooding the domestic market with new crude, and the oil industry is scrambling to line up tankers to move the crude to refineries and then ship the refined petroleum  products to consumers.

Largely absent from most discussions of the tanker resurgence is the environmental impact of the drilling increase. Most of the new oil is thought to displace imports from the Middle East or Africa, so there appears to be little net impact on total oil consumption or the resultant air pollution. With a decision due soon from federal government authorities on whether the Keystone XL pipeline will go forward, it is a tricky moment in relations between environmentalist and organized labor, and neither side seems anxious to worsen the situation by introducing new, potentially divisive issues. And for the Boilermakers and other unions that build tankers and equipment for the energy industry, environmental concerns rarely register.

It's amazing to think that it's not very long ago that it was safe to say that all the... (U.S.-flag commercial tanker construction) was done, which it was, and here we are building ships like crazy, with a bunch more still to be ordered.  This upheaval in the domestic product trades is the most exciting thing that's happened in the industry in decades, especially as there's been almost no growth in these trades since the 1970s.

The excitement was accentuated in June when Reuters reported that ExxonMobil had chartered one U.S.-flag tanker at the astonishingly high rate of $100,000 per day. Controlled by the Koch Shipping and Supply Company (owned by the notorious Koch brothers), the vessel American Phoenix was reported to be earning 50 percent more than similar vessels at the same time last year. With charter rates at these levels, operating U.S.-flag tankers is estimated to be a very profitable enterprise that will spur construction of additional ships.

The lively tanker market also has an effect on the barge industry, which along with pipelines and railroads is an important player in the oil transport sector. For example, barge builder Jeffboat reported in late July that it was adding about 100 new jobs to help fill orders for tank barges. Coincidentally, Teamsters Local 89 ratified a new contract covering about 800 of its members at the Jeffersonville, Ind. yard at about the same time.

Back in Philadephia, Boilermakers’ Evans adds that the new tanker contract there should provide some respite also from political attacks on Aker Shipyard, and also on the Jones Act, the law that requires ships carrying cargo between U.S. ports to be built here and crewed with U.S.civilian seafarers.

Pennsylvania lawmakers have been subjected to intense criticism since 1998 for a series of efforts to financially aid the shipyard’s conversion from a military facility to a commercial yard, and the unions have come in for their share of attacks, he says. Such attacks have been most intense when the yard has struggled, while the benefits of such aid are most apparent when the yard’s order book is full.

Attacks on the Jones Act itself (particularly from big business interests and their Republican Party allies) are almost constant, adds MTD’s Ault. Complaints typically focus on the high cost of building ships in U.S. yards, compared to dramatically lower prices for similar vessels from countries like South Korea or China. But American labor has always argued that the ships are worth the price because they support U.S. jobs and are crucial to the country’s manufacturing base. Shortages of U.S.-flag tankers invariably prompt new calls for doing away with the Jones Act, Ault says, but strong labor union support for the law has been successful in blocking repeal efforts in the past. Today’s unusual conditions in the U.S. domestic tanker market can be expected to draw fresh fire against the Jones Act, he predicts, and unions will have to stand ready to defend the law again.