UAW President Bob King On What Unions Can Do For Detroit 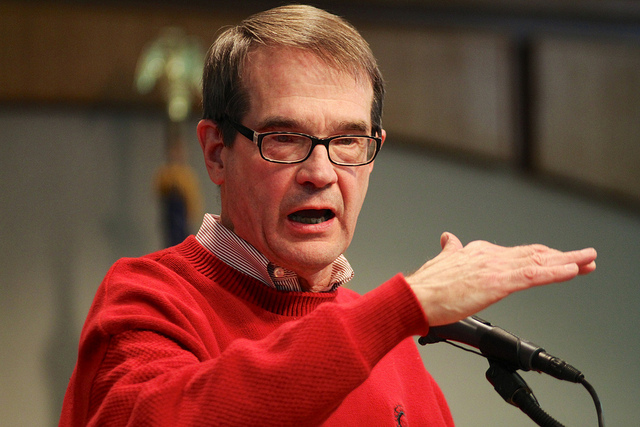 United Auto Workers Union (UAW) president Bob King is battling to help Detroit through its most beleaguered era to date. King joined the parts department at Ford in 1970, and has been a union rep since 1975. Elected leader of the UAW in 2010, he helped his industry through its successful recovery from the 2009 bankruptcies of Chrysler and General Motors. With those companies back in business, he’s rolling up his sleeves to help save the Motor City from the threat that it, too, will go broke.

During the height of the automobile boom in 1950, Detroit was a bustling metropolis of 1.8 million people. Now, it's home to just 700,000 residents. Its buildings are abandoned, its lots are vacant, and 40 percent of its streetlights do not work. On July 18, unable to pay its crushing $18 billion debt, Detroit announced it was filing for Chapter 9 bankruptcy.

If the Motor City goes broke, it will likely be forced to sell government-owned treasures such as masterworks from the Detroit Institute of Arts and property on Belle Isle, which the city considers "the crown jewel of Detroit's public park system" (especially now that half of the city's other parks were forced to close during the recession). Also under threat is Detroit's $12 million collection of 62 of top-of-the-line classic cars.

All of this worries Bob King. But his biggest concern may be Detroit’s unemployment rate, which stands at 16 percent within city limits—the highest of any major metropolis in the United States. In the auto industry, workers face 9.1 percent unemployment, compared to a U.S. average of 7.4 percent. And auto industry unemployment is under threat of spiking even higher if bankruptcy prompts auto manufacturers to move more business out of the city.

King spoke with In These Times about the necessity of teamwork, Detroit’s golden years and the legacy of Henry Ford.

How has the UAW responded to the news that Detroit is filing for bankruptcy? And where do you plan to go from here?

The UAW is strongly opposed to the bankruptcy, especially because city leaders made no effort to sit down with municipal workers and see if all parties concerned could work together, make cutbacks and address the crisis before taking this step. The Detroit branch of the AFSCME [the American Federation of State, County and Municipal Employees] drafted and proposed a $180 million savings package. That union met with the UAW about this, and we agreed that the unions should collaborate with the city and try to make these savings happen. City leaders, for their part, didn’t even bother responding to the AFSCME’s plan. They ignored it and filed for bankruptcy, which seemed to have been their plan from day one. It’s a far cry from what’s happened with the auto industry, where, to address financial problems, there has been collaboration and communication and agreed-upon mutual sacrifice.

Detroit leaders are now taking their case to a judge, first to prove that the city’s finances are dire enough to make it eligible for bankruptcy, then to argue that municipal workers and retirees should settle for leaner benefits than they once expected. You have protested these potential cutbacks, calling them "immoral" and "wrong." In what ways is the UAW working to help save government worker pensions?

We defer to the AFSCME as the lead on this. But we have been involved in helping them craft their legal strategy. As we consult attorneys and raise awareness about this problem, we’re hammering home the fact that these workers’ pensions are very modest. Other cities in Michigan offer pensions that are up to 30 percent higher than those in Detroit. The unions’ lawyers are hoping to bring this up in court. And our communications departments are advocating for negotiations with government leaders who have denied us that opportunity so far. They need to start cooperating with us if we are going to make Detroit a viable place for municipal employees—and everyone—to live and work again.

Detroit's current woes are the polar opposite of the prosperity it enjoyed in 1955, when Detroit-based General Motors became the world’s first company to earn more than $1 billion in a single year. At that time, and for two decades afterward, auto employees (along with workers in Detroit’s other industries, who were feeding off the success of the auto boom) were pretty much guaranteed a comfortable, middle-class living followed by a secure retirement. How does the memory of those golden years affect the way the UAW is responding to challenges today?

UAW retirees are saddened by the loss of that era. They want to know what we are going to do to recapture that time. We tell them we appreciate all the achievements and the sacrifices they have made. But we also tell them times have changed. Global competition means we have to drum up new strategies and tactics. We are still committed to creating the best product for consumers. But we have to think outside of the old box, which means extending our reach beyond the memory of the boom and also beyond Detroit. If our industry is going to survive, our first priority has to be building collaborative relationships. We have to do creative problem solving with auto companies not just here, but everywhere. Within the U.S., we have to work to bring back jobs that have been outsourced or sent overseas. And across the globe, we have to build worldwide networks of autoworkers. We need to share best practices. We need to bring unions together to build closer collaborations and strategize. If we see something that is unfair happening in another country, we have to speak up and intervene.  Solidarity is the only way we are going to keep our industry strong. That’s how we’re going to continue regaining the jobs that the U.S. auto industry and Detroit have claimed back in recent years.

How has the UAW helped the industry bounce back from the 1980s, when the Big Three auto companies (General Motors, Ford and Chrysler) started implementing a series of layoffs that have, for the moment, ended?

Layoffs are always terrible. But we haven’t had massive ones since 2008-2009. The Big Three companies are not only hiring now, but they’re planning to expand their operations in the U.S. We’re coming out of the woods with this because we worked—and worked hard—to sit down with all parties and negotiate a restructuring of the entire auto industry. [Editor's note: In exchange for $25 billion in government loans, the Big Three recently agreed to “equip or establish facilities to produce ‘advanced technology vehicles’ that would meet certain emissions and fuel economy standards”]. Just a few years ago, laid-off autoworkers would go sit at the bar and moan about how little they had to do on a given day. But now, they are bragging to their friends and families about the new jobs for which they’ve been hired, like manufacturing the Detroit-made Chevy Volt [a hybrid car that was introduced in 2011 and that is now rated the most fuel-efficient vehicle in the U.S.]. If we restructure the city just like we restructured the auto industry, there’s hope that Detroit, too, can see a turnaround.

New York City nearly declared bankruptcy in the 1970s, but managed to avoid this fate by brokering share-the-pain cutbacks. What lessons from the NYC of four decades ago should Detroit leaders consider today?

In [New York City], Mayor Ed Koch and his team made smart decisions and, in the end, managed to make worker pension funds stronger. New York started doing a better job of investing, collecting taxes and streamlining city services. Its leaders achieved these feats because they kept an open mind, and because they look at every possible way out of their predicament. They thought outside the box, and they didn’t put the burden on city workers. Detroit should also explore every path. There may be no silver bullet. But collaborative and determined strategizing can help us find the right answer.

The day we’re conducting this interview, July 30, 2013, is the 150th anniversary of the birth of Henry Ford, who founded the auto industry—and bankrolled Detroit—by starting to mass produce Model T cars in the city in 1908. If Ford were here today, what do you think he would have to say about the current state of Detroit?

I think Henry Ford would certainly be disappointed by Detroit’s plan to declare bankruptcy. But I know that like any great leader—or any great citizen—he would be invested in and committed to turning this city around.

The International Union, United Automobile, Aerospace and Agricultural Implement Workers of America (UAW) is a sponsor of In These Times.