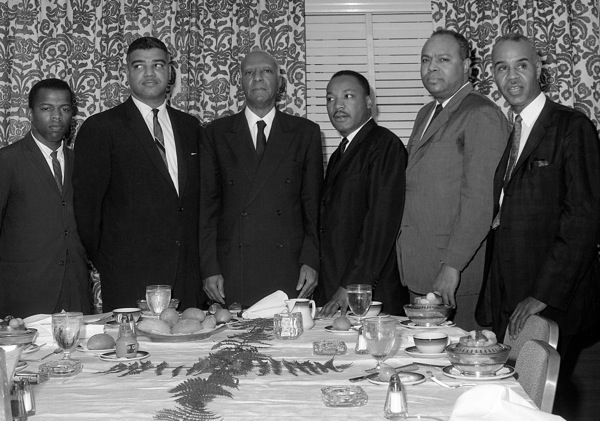 Unions are strongly backing a march in Washington, D.C., next week to mark the 50th anniversary of the 1963 March on Washington for Jobs and Freedom, where Rev. Martin Luther King Jr. gave his famous “I have a dream” speech. Participating unions are heralding King's strong ties to labor, and many are using the opportunity to renew the original march's call for jobs and freedom.

AFSCME [American Federation of State, County and Municipal Employees] is one of at least 15 unions who are financially sponsoring the August 24 rally and bringing members to participate. AFSCME has chartered about 100 buses and plans to bring 3,000 to 5,000 marchers, says spokesperson Chris Fleming.

“At AFSCME, we have a special connection to Dr. King,” says Fleming. "Many will remember that he died in Memphis in 1968 when he went there to support the sanitation workers who were organizing with AFSCME. The same struggle for economic justice continues today, so we are proud to honor him by continuing the struggle."

AFSCME is not the only union with a special connection to King. The United Auto Workers noted in an announcement this week that the UAW was one of the few unions to openly support the original 1963 march and that then-president Walter Reuther was one of the foremost labor leaders associated with 1960s civil rights movement. The UAW is organizing a fleet of buses to bring union members and supporters to the march, and union President Bob King is planning to march himself, the union says.

The principal organizer of the march is the Rev. Al Sharpton’s National Action Network, which is joined by a wide array of other civil rights groups, religious organizations, women’s groups, and others. Organizers are unwilling to estimate the size of the expected crowd, but several publications have speculated that some 100,000 will attend. Some of the nation’s top political leaders are also scheduled to take part, so anticipation is building that the march will become a major national event.

The APRI, named for one of the original organizers of the 1963 march and the long-time president of the Brotherhood of Sleeping Car Porters (later merged with another union and now part of IAM), is hosting a week-long schedule of events built around the anniversary of the "I have a dream" speech. The Brotherhood of Sleeping Car Porters was the first union for black workers chartered by the American Federation of Labor (AFL), and Randolph is remembered as the first black labor leader to become a member of the AFL executive board. There he was a tireless champion of the rights of African-American workers within organized labor and of civil rights within the larger society. He is credited with ensuring that 1963 march stressed "jobs" just as strongly as "freedom."

Donna McDaniel, Assistant Director of the Minority Advancement Department of LIUNA, says her union has chartered 16 buses, some from as far away as Ohio and Kentucky, and expects to bring 1,000 people to the march.

McDaniel spoke for several union representatives contacted by Working In These Times when she commented that “it is amazing how far we have come in the last 50 years in civil rights. But the original march had the theme of ‘jobs and freedom,’ and I think we have lost ground on the jobs part. Unions are smaller and are under constant attack. Unemployment is high, particularly in our African-American communities, and very few of our politicians seem to care about that at all. We’re still fighting for jobs.”

Claude Cummings, a Texas-based CWA official at center of the union’s march organizing efforts, agreed. “Some the same things we were fighting for in 1963 we are fighting for today. At CWA, we are working to strengthen our alliances with other labor unions and with other progressive groups beyond labor. So we’ll be there next week,” he says.

CWA, AFSCME and UAW are website sponsors of In These Times.