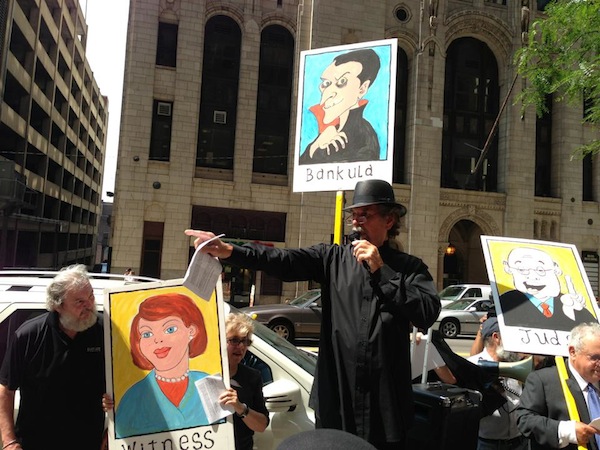 Feeney was tired from a day of playing songs and mooning scabs during a rallly on the picket line at Pittsburgh’s locked-out Neville Chemical plant during the second stop of the “Summer of Solidarity,” a 17-day tour of 13 cities across the country. Now she, along with Canadian rapper Michael Fraser O’Brien of Kill the Autocrat and five other union activists, was moving on to the next leg of the tour, in Detroit.

Unlike the typical largescale labor events organized by international unions' central staff, the tour is being put on by locals and rank-and-file members of various unions, including United Electrical Workers (UE), the Bakery, Confectionary, Tobacco Workers and Grain Millers union (BCTGM), UNITE HERE, the International Longshore and Warehouse Union (ILWU) and United Steelworkers (USW). And instead of being bankrolled by a large union with the financial resources to easily cut a check for tens of thousands of dollars, the caravan has been funded through crowdsourcing efforts on IndieGoGo. The aim, the activists say, is to connect “the grassroots” of various unions.

The ultimate goal, Summer of Solidarity organizers say, is to connect with community groups engaged in struggles that all too often are overlooked by union activists mired in the day-to-day work of grievances, arbitration and contract bargaining.

“All of these struggles are connected. This tour is all about a life-or-death struggle against corporate greed,” says Summer of Solidarity organizer Mike Zielinski, a member of United Steelworkers Local 3657 in Pittsburgh. “So it’s connecting struggles on the job, contract fights, labor disputes, community battles over housing and education and ensuring that our society meets its promise. We are organizing to bring these struggles together into an irresistible force of change.”

At its third stop in Detroit, the caravan linked up with labor and community activists holding a people’s trial of Bank of America for its role in the economic decline of the city. The dire straits of Detroit’s economy were underscored by a recent bankruptcy filed by the city’s unelected emergency financial manager, Kevyn Orr, who was appointed by Michigan’s Republican Governor Rick Snyder.

Orr has indicated that he intends to cut the pensions of retired public employees as part of the restructuring of Detroit’s finances. On Monday, the Michigan Chapter of AFSCME argued in federal court that Orr’s move was an “unconstitutional, unlawfully authorized Chapter 9 proceeding seeking the haven of bankruptcy to illegally attempt to slash pension and other post-employment benefit obligations and cram such reductions down the throats of current and former city employees."

Outside of the federal courthouse where the hearing was held, the people’s trial argued that it should be Bank of America, and not public-sector unions, in court defending themselves.

“It’s all the banks, including Bank of America, that have destroyed Detroit,” said Chris Driscoll, a local member of the United Steelworkers who, despite the sweltering heat, was dressed in a black garbage bag to play the role of the trial’s defendant, the vampire-cum-bank Bankula. “They foreclosed on so many homes, leaving the homes empty, reducing the tax base of the city and then turning it around and lending money to the city at exorbitant rates and helping create this bankruptcy crisis in which privatizers want to come in and buy half of Detroit.”

“We don’t owe them,” said Dave Sole, a 65-year-old retired chemist with the Detroit Water and Sewerage Department. “The banks should pay Detroit for the criminal activity that destroyed it.... Any cut in our pensions—and my wife is a retired City of Detroit Department of Transportation worker--would cause us to lose our home.”

Sole says the workers will put a serious fight for the benefits they were promised.

“Everyone on the picket line this morning, we are all veterans of the civil rights movement, the union movement and the anti-war movement, and if we have to, we can show them something they haven’t seen for years. Let me leave at it that,” says Sole.

He adds that their fight will have repercussions far beyond Detroit.

“They are hoping that communities around Detroit will not lend solidarity to Detroit,” says Sole. “They’re counting on racism. ‘Oh, the hell with black people, Detroit, poor people...’ But if they get it in Detroit, it opens it up everywhere in the country.... They want to make an example of Detroit.”

Organizers with the Summer of Solidarity tour hope they can illuminate how the seemingly isolated struggle in Detroit is part of a larger battle against workers. Honeywell uranium plant worker Stephen Lech, whose United Steelworkers Local 7-699 in Metropolis, Ill., was engaged in a 14-month lockout from 2010 to 2011, says that the solidarity his local received from other unions was vital.

The tour also hopes to highlight not only the ugliness of what is happening to so many workers, but the beauty of the means by which they communicate their struggle. Feeney and O’Brien displayed that beauty at a concert put on with several Detroit bands at the art gallery Swords Into Plowshares. Activists shared “class war stories,” beers, and laughs as they discussed the state of their struggle.

Feeney, who has participated in dozens of similar tours throughout her decades in the labor movement, says that the 1986 march for peace caravan that went through Pittsburgh inspired her to take part in so many tours herself.

“There is something about travelers coming into a place that makes people vulnerable in a way that they normally would not be,” says Feeney. “High energy people coming into a place, playing music and doing stops has a real ripple effect. Some people will get inspired to do even more as activists. We will never know truly what impact this may have on people, but it may change people’s lives forever.”

This is the first in a series by Mike Elk, who is traveling for two weeks with the Summer of Solidarity tour. To help In These Times cover his travel expenses and to send more reporters to cover grassroots activism around the country, donate here.