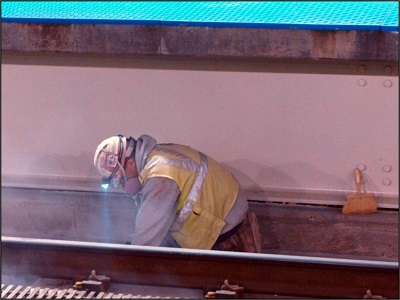 A CTA rail worker laying down track is in one of the many occupations at high risk of exposure to cancer-causing silica dust.   (TheeErin / Flickr / Creative Commons).

Today, after a much-criticized delay on issuing a rule to limit workers' exposure to cancer-causing silica dust, the Obama administration put forward a proposed rule for public consideration. The U.S. Department of Labor's Occupational Safety and Health Administration (OSHA) estimates that once the rule is in effect, it could save 700 lives a year and prevent nearly 1,600 cases of silicosis annually.

In an OSHA press release, Dr. David Michaels, assistant secretary of labor for occupational safety and health, commented, "Exposure to silica can be deadly, and limiting that exposure is essential. Every year, exposed workers not only lose their ability to work, but also to breathe. This proposal is expected to prevent thousands of deaths from silicosis—an incurable and progressive disease—as well as lung cancer, other respiratory diseases and kidney disease. We're looking forward to public comment on the proposal."

Workplace safety advocates applauded the decision. In a press release issued by the non-profit National Council for Occupational Safety and Health, executive director Tom O'Conner noted that workers who are most exposed to silica tend to be those least able to advocate for themselves.

"Low-wage immigrant workers and temporary workers are disproportionally represented in the industries with silica exposure—and are the most vulnerable to retaliation should they report potential hazards, injuries or illnesses," O'Conner said. "This new rule will help to pull them out of the shadows and make them safer at work. Everyone, regardless of immigration status, deserves a safe workplace.”

However, some in organized labor say the fight to enact the rule has just begun, as it will have to undergo a public comment period before it is issued. In his response to the news of the rule, AFL-CIO President Richard Trumka cautioned:

But this rule is only a proposal–workers exposed to silica dust will only be protected when a final rule is issued.  Some industry groups are certain to attack the rule and try to stop it in its tracks. The AFL-CIO will do everything we can to see that does not happen. We urge the Obama administration to continue moving forward with the public rulemaking process without delay. The final silica rule should be issued as fast as humanly possible, to protect the health and lives of American workers.