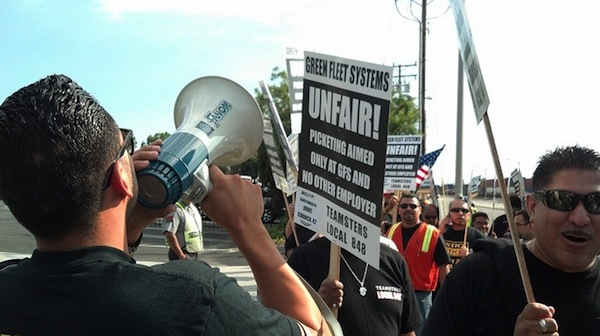 Workers at the Ports of Long Beach and Los Angeles were probably surprised yesterday to see groups of truckers chasing trucks making deliveries and setting up temporary picket lines in front of them.

Port truck drivers went on a 24-hour strike early Monday evening to protest alleged union-busting by Green Fleet, one of the port’s biggest trucking companies. The Green Fleet drivers say that the company harassed and intimidated workers who were trying to organize with the Teamsters, and hired a union-busting law firm to block unionization.

The strike is the latest salvo in an ongoing campaign to organize port truckers, who say that despite playing a key role in the global supply chain for some of the country’s largest corporations, the trucks they drive amount to “sweatshops on wheels.” Many drivers make poverty wages and complain of subhuman working conditions, like being denied access to bathrooms.

Organizers say 30 of the about 80 full-time workers at Green Fleet, who move merchandise for companies like Skechers and Huffy, walked out early Monday evening and successfully returned to work Tuesday. The strike follows last year’s successful union drive for port truckers employed by Toll Group in Los Angeles and New Jersey, as well as a trucker strike in Seattle.

It’s also the latest use of the strike as a short-term, offensive tactic against low-wage employers—a technique that seems to be spreading across the country.

Mario Hernandez has driven trucks at the Port of Los Angeles for 15 years and has worked for Green Fleet for four. He says he and his coworkers are paid not by the hour, but by the load, meaning they never receive overtime pay despite being forced to work overtime hours.

“I’m struggling. I can’t even take my kids to the dentist,” Hernandez says. Adding his family onto his just health insurance plan—not including dental—would have cost an additional $120 per week, “and I can’t afford that.”

Hernandez has a friend working for Toll, whose successful union drive led to a contract with employer-paid healthcare. “We do the same job;  we move the same kinds of containers that they do,” he says. “Why shouldn’t we have the same benefits?” Inspired by Toll workers’ victory, Green Fleet workers began organizing in January.

Hernandez is a full-time Green Fleet employee, but the company also employees 35-40 independent contractors, according to the organizers, in Los Angeles, who as “owner-operators” of their trucks receive no benefits and are responsible for the cost of upkeep of their vehicles. The contractors form a kind of hyper-exploited second-class workforce throughout the trucking industry that owners use to keep wages low.

No independent contractors are on strike, as they cannot file unfair labor practice charges, but organizers did say some of them did not show up to work today. Independent contractors face even more abusive conditions than full-time employees. In a 2011 open letter from independent contractor port truckers in multiple cities, drivers described “keep[ing] empty bottles in our cabs” to urinate into, as some trucking companies do not provide basic facilities for contractors, and numerous costs for basic operation. “Everything comes out of our pockets or is deducted from our paychecks,” the letter reads. “The truck or lease, fuel, insurance, registration, you name it.”

Nick Weiner, campaign coordinator for the Change to Win federation (of which the Teamsters are a member) ports campaign, says port drivers “sit on the bottom of port economy.” “Misclassification of full-time workers as independent contractors is at the heart of the business model” of trucking companies,” Weiner says. Such misclassification is a widespread practice across the American economy that allows companies to avoid paying benefits and escape some taxes.

“Misclassification is a scourge of this country,” says Rabbi Jonathan Klein of Clergy and Laity United for Economic Justice (CLUE), a faith-based worker rights organization in Los Angeles. “It hurts working people’s ability to have fair conditions on the job. In this case, it creates wage theft, and allows them to be abused.”

Klein is one of 10 religious leaders accompanying workers back to work post-strike on Tuesday.

Ambulating to the win

Hernandez also says that after a group of workers delivered a petition to management demanding recognition of the union, Green Fleet management never responded; instead, they brought in a union busting law firm to intimidate union supporters.

“Why is [management] paying them so much money to avoid a union rather than sitting down with us to form our union?” Hernandez says.

Truckers walked off at 4:30 P.M. on Monday, and immediately began “ambulatory picketing.” Since truckers travel throughout the workday, strikers follow “scab” trucks and picket them near their final destination.

According to organizers, one strikebreaking driver was attempting to make a delivery when he noticed strikers were following him. He stopped, put on his hazard lights, and jumped out of his cab to begin talking with the strikers about their decision to walk off the job. He returned to his cab and wrote the drivers a note in Spanish (pictured below), explaining he was too scared of getting fired to join, but supported the strike. Workers were joined by religious leaders and local politicians, including the mayor of the city of Carson, Calif., where the Port of Los Angeles is located, and U.S. Rep.  Janice Hahn (D). One city council member, Mike Gipson, spent much of the night with the workers, from midnight to 4:00 A.M.

On Tuesday, workers returning to work accompanied by community members were initially turned away from the company’s entrance. But after a half hour outside the gates, the company eventually agreed to the workers’ return to work today—leading the union to declare victory.

The Los Angeles truckers are the latest low-wage, non-union workers to walk off the job, engaging not in a traditional strike after an impasse in bargaining but as an offensive measure, walking off over alleged unfair labor practices (ULPs) before becoming formal union members—what Labor Notes’ Jenny Brown calls a “strike first strategy.”

Fast food and retail workers continue to make headlines for multiple strikes since last fall, in an effort backed by the Service Employees (SEIU). Beginning in October, Wal-Mart workers organizing with OUR Walmart, affiliated with the United Food and Commercial Workers (UFCW), walked out several times. Warehouse workers in a Chicago suburb struck in September, staying out on the picket line for weeks and shutting down a key Wal-Mart distribution center for a day before winning most of their demands. Soon after, warehouse workers struck in Southern California.

Such strikes are quickly gaining traction across industries and various unions, particularly within Change to Win (though since backing the Wal-Mart workers’ first strikes, the UFCW has returned to the AFL-CIO). As I wrote earlier this year for Dissent, even though these walkoffs do not always significantly hurt companies’ profits—the key power of the strike, according to Joe Burns’s recent book on the subject—they do serve to legitimate the act of striking to wring concessions out of employers at a time when strikes are at an all-time low. Tentatively, more unions and more workers seem comfortable with taking militant action on the job.

The port truckers returned to work Tuesday afternoon, accompanied by community and religious leaders to protect them from retaliation, as many fast food and retail strikers have done in the past. Organizers say the 24-hour walkoff is just the beginning of the Green Fleet campaign, and that further battles with other nonunion port trucking companies are also likely.

Gonzalez says he is sure other drivers will support future strikes if this one brings gains, as he was galvanized when he saw the unionized Toll drivers win union recognition and a contract.

“Once they see us back at work, they’ll lose their fear,” he says.