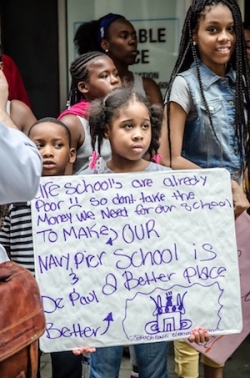 “David Vitale, we don’t recognize you as the board chairperson... You’re fired!”

Thus Jitu Brown, education organizer at the Kenwood Oakland Community Organization on Chicago’s South Side, began today’s protest rally of about 400 students, parents and community members outside the downtown headquarters of Chicago Public Schools (CPS), where Chicago Board of Education president Vitale and the rest of the board were holding their monthly meeting.

Activists like Brown have been incensed by unpopular board decisions like the recent 50 school closures and massive budget cuts, and students haven’t been happy at the changes, either. Today, dozens boycotted school to join community organizations from around the city at the rally.

The protesters demanded that the school board be directly elected by Chicagoans, rather than appointed by the mayor, to make the body accountable to community needs.

“We have jumped through every hoop CPS has said to jump through, and still, they make the same decisions over and over again that have damaged schools in our communities,” Brown said. “We need an elected school board!”

The boycott was called by community groups earlier this summer. Yesterday, Mayor Rahm Emanuel pleaded with parents not to keep their children home from school.

“You have a disagreement [about school closings]? The court has spoken to that. You don’t like something? There’s another way to speak of it. Do not take the kids out of school and harm them and their future,” Emanuel said.

No boycott organizers or union officials knew the exact number of students who participated in today’s boycott. But the number of students skipping class for today’s rally was far below Civil Rights-era CPS boycotts, like the one in 1963 protesting extreme racial segregation and miserable conditions in the city’s schools. According to community and teachers union staff, most schools continued business as usual.

However, the clamor for an elected board seems to be growing.

Standing in the middle of the crowd with her three children participating in the day’s boycott, Mae McLeninen, a janitor at Curie High School on the South Side, said she kept her elementary-age kids out of school to join the effort against Emanuel and the board.

“We’ve gotta get rid of the mayor, but not just him. We have to hold them accountable through an elected school board,” McLeninen says.

“TIF money is our money. We should be able to tell them to put that money into schools,” says McLeninen, referring to tax increment financing (TIF) dollars—public funds initially designed to alleviate blight that critics say have taken resources away from schools and have become a giant slush fund for the mayor to dole out giveaways to corporations like MillerCoors and the Chicago Mercantile Exchange.

The Chicago Teachers Union did not officially endorse the day’s boycott, though CTU staffers and members in red T-shirts could be seen throughout the crowd.

“We can’t ask kids not to go to school, but if parents think that’s the best thing for their children, we fully support them,” says Kristine Mayle, the CTU’s financial secretary.

Mayle says she understands the frustration of many parents at massive class sizes in many schools throughout the district and the failure to deliver promised items like iPads and air conditioning to sweltering classrooms during a Midwestern heat wave this week.

“The reports we’re getting from schools are that the promises the district gave them are not being kept, so it’s understandable they want to fight,” Mayle says.

As I reported for Al Jazeera America last week, many CPS parents were worried before the school year began on Monday that schools would not be able to meet students’ basic needs, thanks to budget cuts of $162 million and teacher layoffs throughout the district, as well as school closings and consolidations in neighborhoods of color on the South and West Side.

That worry has come true, according to several of the day’s speakers. After the protesters marched from the school board headquarters to city hall, Jamie Adams, a sophomore at Roosevelt High School in the Albany Park neighborhood, told the crowd that her school saw $1.6 million in budget cuts and layoffs of six teachers and counselors, leading to overcrowding.

“We’re literally fighting over desks. Some of us are sitting on the floor,” Adams said.

Adams joined a group of about 20 students affiliated with the newly-formed Chicago Students Union, who say they will be waging a campaign for a seat on the city’s school board for students.

At the Board of Education meeting this morning, parents, teachers, union officials, and community organization representatives denounced the board’s actions during the public comment period, in a scene that has become routine in this city. Lane Tech parent Adenia Linker promised parents will keep fighting “until this board is history.”

The beginning of last year’s school year saw the Chicago Teachers Union walk out in a historic strike. With several hundred parents and students marching on the third day of school, a growing campaign to end mayoral control of the city’s school board, and rising anger among parents and students over austerity measures, the new school year promises to be just as contentious.