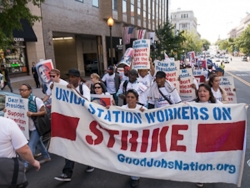 Efforts to convince President Barack Obama to sign an executive order boosting the wages of some low-income workers at federal sites moved forward Wednesday with a one-day strike in Washington, D.C.

After walking off their jobs at a handful of high-profile federal buildings, an estimated 150 non-union workers marched to the White House. There, they presented presidential staffers with petitions containing about 250,000 signatures calling for the executive order. Sen. Bernie Sanders (I-Vt.) and Rep. Keith Ellison (D.-Minn.) joined the demonstration to issue public demands for Obama’s immediate action.

It’s the latest in several one-day walkouts by employees at the Smithsonian Institution, Ronald Reagan Building, Union Station rail terminal, and other federal sites to protest the low wages paid to the cleaning crews and food service workers there, says Paco Fabian, a community organizer with the Change to Win labor federation. All of these sites are owned by the government, and an executive order establishing a “living wage” for private sector workers whose jobs are dependent on federal contracts, grants, loans, or property leases would immediately boost the incomes of these hard-pressed workers, he continues.

Demonstrators at the protest spoke about the lack of opportunity for wage increases at federal installations. Vilma Martinez, a cleaning crew worker at Union Station, tells Working In These Time that she earns just $8.75 an hour at her job for contractor Interstate Cleaning Corp. (ICC), and she has not had a raise there in 12 years.

A legal immigrant from El Salvador, Martinez, 50, says that ICC’s benefits are “nada.” According to interpreter Ricardo Gallardo, Martinez must receive medical treatment for her heart condition only during twice-a-year trips back to El Salvador, where she has three grown children. Doctor visits and heart medication is much more affordable there, she says. The trips back home are only possible because she works a second job for a different cleaning company in the city, Martinez adds.

Martinez says almost half the members of her 32-person cleaning crew are strike supporters, and tensions with managers have risen sharply since executive order agitation began earlier this year. “Management has done many bad things. They used to talk to us with good manners but now they are angry all the time.” She explains, “They deny permission for anything,” such as time off for a doctor’s visit, or to attend to family matters. Strike supporters have been subjected to punitive work assignments since the first one-day strike in May, she says.

Despite the risk of reported backlash, Martinez stands firm in her support of the wage increase. “I would like to ask the president to please sign the executive order,” she says.

Support for such an order is growing in Congress. Though Republicans have opposed Obama’s other proposals to raise the minimum wage, Ellison told the crowd that 50 members of the Congressional Progressive Caucus (CPC) signed a letter to Obama this week endorsing a minimum wage of $10.10 for workers at federal installations, and Sanders added that 14 members of the Senate signed a similar one. In addition, Ellison said that approval for the idea is increasing among House Democrats. According to Fabian, the CPC has made the executive order a centerpiece of the pro-worker “Raise Up America” campaign launched in late June.

Labor-backed think tank Demos also released a new report—timed to coincide with Wednesday’s events—to advocate for a cap on the salaries of top executives of government contractors as a way to help finance higher incomes for low-wage workers. According to the report, titled “Underwriting Executive Excess,” a cap of $230,700 on executive salaries could finance an increase in wages for nearly 560,000 low-income workers, all without any increased cost to the government.

D.C.-based radio personality Joe Madison has adopted the executive order campaign as a personal project. He gave a spirited address to the strikers on the sidewalk in front of the White House.

On the subject of the executive order, he told the crowd, “I had a one-on-one with President Obama. I said to him, ‘You are the landlord at Union Station. You are responsible. Congress can’t do a damn thing about it.’ ”

Madison later told Working In These Times that the president had replied, “I understand. I’m on it.”