‘People’s Board’ Takes On Rahm Emanuel’s Handpicked School Board 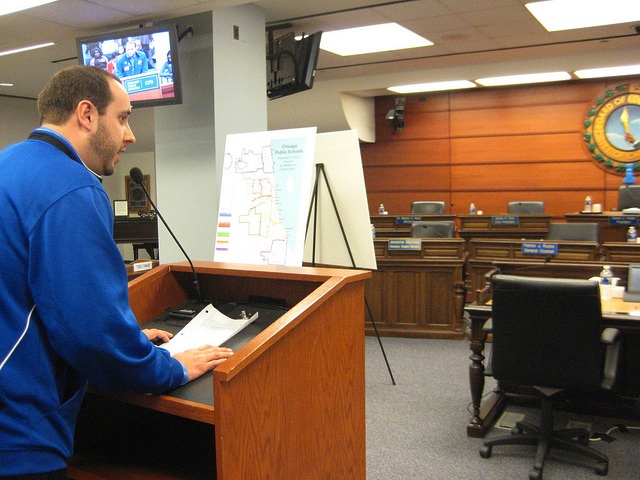 In December, teacher Jason Cooper testified to empty chairs at a Chicago Board of Education meeting after board members retreated from protesters. (Linda Lutton / Flickr

Jitu Brown, an education organizer at Chicago’s Kenwood Oakland Community Organization, has been a fixture at Chicago Board of Education meetings for the last few years. Almost every month, he excoriates the board for signing off on policies like the unprecedented closure of 50 public schools this May or budgets that drain money from neighborhood schools.

But Brown says his days of complaining to deaf ears are over.

Kenwood Oakland Community Organization and groups such as Action Now, many of which are loosely allied with the Chicago Teachers Union through shared citywide activist coalitions, were conspicuously absent from Wednesday morning’s Board of Education meeting in downtown Chicago. Instead, these advocates convened Wednesday night at Mt. Carmel Missionary Baptist Church in Chicago’s Bronzeville neighborhood to hold the inaugural “People’s Board of Education.”

The few dozen attendees—including several high school students, members of the teachers union, and representatives of Chicago neighborhood organizations—were there to try out a new organizing strategy. Instead of engaging a Board of Education that is appointed by Mayor Rahm Emanuel and serves entirely at the pleasure of the mayor (Emanuel appointed a completely new board when he took office in April 2011), they will fight for legislation in the state of Illinois that would usher in a school board decided by Chicago voters.

Brown says that his recent organizing efforts to get parents, teachers, students and community members to attend official Chicago Public Schools events, like the monthly board meetings and hearings this spring on the school shutdowns, amounted to wasted energy.

“We went to school closing hearings organized by CPS as opposed to steering people away from those meetings and toward the fight for an elected school board,” Brown said in an interview with Working In These Times after the People’s Board of Education meeting. “We had furious anger but it was misdirected. It was like pouring water into a glass with a hole in the bottom.”

The People’s Board of Education actually decided to design their meeting similar to an official CPS event. Community activist board members gave brief opening remarks about the need to “fight a focused fight,” in the words of Brown, and persuade state lawmakers to support an elected school board. The people’s board then turned the meeting over to short talks by audience members, much like the Chicago Board of Education lets registered public speakers address the board for up to two minutes.

Anita Orakoff, a resident of the Hyde Park-Kenwood neighborhood, emphasized the need to increase the visibility and pull of Local School Councils—elected bodies at each Chicago public school that have the power to hire the school’s principal and make some budget decisions.  Orakoff pointed out that the members of LSC’s are currently the only education officials in the city that are directly accountable to voters.

Juanita Douglas, a teacher at Lincoln Park High School, said that she would like CPS central office officials to spend more time in the schools. “I would tell the board to come undercover. Come see what’s going on, sit with the teachers,” Douglas said. “It’s not all ugly; I love everything about teaching my kids to grow.”

Pauline Lipman, an education professor at the University of Illinois-Chicago who attended the meeting, said that while the structure was similar to Board of Education meetings, the difference was that the People’s Board members listened.

“I have gone to the Board of Education and stood in line starting at 6:00 in the morning only to speak for two minutes to people who are texting and reading the newspaper while we’re talking to them,” Lipman said.

Lipman co-authored a 2011 University of Illinois-Chicago study that compared elected to appointed school boards across the country. The study cited examples such as school boards in Milwaukee and San Francisco, where elected boards voted against matters proposed by district officials, such as school closings, after a community input process.

Lipman says that while an elected school board is “no magic bullet,” it is a “necessary condition to restore democracy in education to Chicago.”

Still, the strategy of giving up on the current board and fighting for a new one is risky.

Introduced in January 2013 by State Rep. Elgie Sims, a South Side Chicago Democrat who says that he works closely with education activists, Illinois House Bill 2793, which calls for an elected Chicago school board, is currently in the state’s House Rules Committee. Brown noted that committee is traditionally where “bills go to die.”

Democratic Gov. Pat Quinn, a Chicago resident who is up for re-election next year, supports an elected Chicago school board, putting him at odds with Emanuel. But state legislative leaders like House Speaker Mike Madigan, also a Chicago Democrat, have stayed quiet on the matter.

Brown says he will try and persuade downstate lawmakers that the law is one way to better align Chicago—the only district in the state with an appointed, instead of elected, school board—with the rest of Illinois.

Sims says that “before we push forward” on getting a Rules Committee vote, he will wait and see if advocates are successful in getting more lawmakers to support the measure.

“We have no position yet on an elected school board,” Bolduc says. “We’re focusing on fiscal reform right now.”