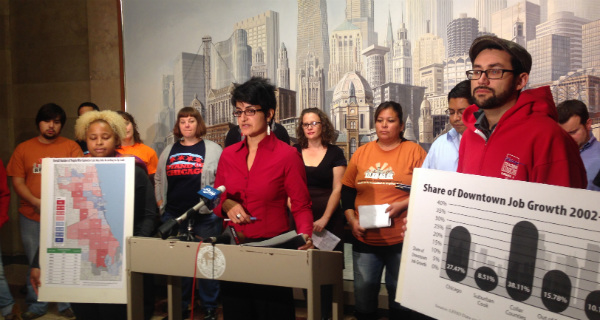 Most of Chicago isn’t feeling any positive impact from the billions the city has spent on economic development over the past decade.

“Downtown Prosperity, Neighborhood Neglect: Chicago’s Black and Latino Workers Left Behind," a study released yesterday by the labor-community coalition Grassroots Collaborative, found that the city of Chicago’s attempts to stimulate economic growth over the past decade have used taxpayers’ dollars to benefit residents outside of Chicago, while exacerbating racial inequality in the city’s employment market.

The study found that from 2002 to 2011, $1.2 billion in taxes, collected through the city’s tax increment financing (TIF) program, helped contribute to the creation of a net 52,404 new jobs in downtown Chicago. But only one in four of those jobs was filled by a Chicago resident—meaning that Chicagoans’ tax dollars were subsidizing jobs for suburbanites, whose own tax dollars likely went to the suburbs.

And of the small percentage of tax-funded jobs staffed by city residents, white Chicagoans took the bulk: majority-black and -Latino zip codes suffered median losses of 620 and 381 downtown jobs, respectively, while majority-white zip codes added a median of 509 downtown jobs.

At a press conference at city hall on Tuesday, Grassroots Collaborative Executive Director Amisha Patel claimed the city has not prioritized economic development for the bulk of Chicago’s citizens.

The city’s employment inequality has also helped fuel a mass exodus of minority residents out of Chicago. While the city saw a net loss of 188,893 residents in the past decade, those losses were not demographically uniform: 74.2 percent were African-American, most of whom lived in neighborhoods that saw significant job losses even as predominately white areas gained opportunities.

Though the TIF program has become many politicians’ central tool for economic development in Chicago, the report found that overall, “siphoning off tax revenue through TIF ... disproportionately harm[s] lower income households and neighborhoods.”

In a statement provided to the Chicago Sun-Times, mayoral spokesperson Sarah Hamilton stated, “Throughout his career, the mayor has supported efforts to make the tax system fairer and less of a burden on middle class families.”

But the Grassroots Collaborative’s attention towards TIFs is just the latest in the recent critical attention the huge tax fund has received after years of operating under the radar.

Though the program began in 1977, Mayor Richard M. Daley was the first to aggressively use TIFs for development purposes. The program has always operated outside public purview, though—the amount Chicagoans pay into the fund is not readily apparent to individual taxpayers, leaving the program mostly unscrutinized.

To create a TIF district, the city selects an enclosed geographic district within which property taxes that would normally go into the city’s general fund, where they would be distributed to city functions and services like schools and libraries, are capped at a given amount; taxes paid above that amount go into the TIF fund. TIFs could be used as a way to redistribute wealth by taking tax dollars from wealthy neighborhoods and using them on development programs in poor ones. But at least since Mayor Daley, TIFs have been used as what the Chicago Reader’s Ben Joravsky and Mick Dumke refer to as a “shadow budget:” they funnel millions of dollars to downtown Fortune 500 companies and glitzy real estate developments nearly entirely at the whim of the mayor and his office, with almost no public oversight or accountability.

Joravsky, whose zealously obsessive attempts to expose the TIF program in recent years can largely be credited with dragging the program into the sunlight, sums up the program’s effects thusly:

Tax increment financing is the program in which the mayor jacks up property taxes in the name of things you want—like schools and police—but then spends the money on things you don't want, like the basketball arena for DePaul.

He does this under the guise of eradicating blight in low-income communities, which wind up receiving a relative pittance of the TIF money.

In recent years, activists like the Grassroots Collaborative and the Chicago Teachers Union have taken up TIF restructuring as a central cause; one of the mass marches during the 2012 Chicago teachers’ strike (organized in large part by the Grassroots Collaborative) focused solely on TIFs, and public school parent organizations allied with the CTU have demanded that Mayor Emanuel reach into the city’s TIF fund to plug Chicago Public School’s current budget shortfall.

At Tuesday’s press conference, Roosevelt University Assistant Professor of Sociology Stephanie Farmer noted that TIFs have often been used to disproportionately fund selective enrollment schools, where much of the city’s middle- and upper-middle class families send their children to school, rather than the neighborhood schools which make up the overwhelming majority of CPS students.

The Grassroots report listed a number of recommendations for the city, including what the group calls “Robin Hood porting”—which would require TIF money to come from wealthy downtown areas and be allocated to poor neighborhoods—a commuter tax (a move Mayor Emanuel promptly rejected) and a requirement that companies receiving city subsidies create jobs for Chicagoans, among others.

Patel says without these changes, the vast racial and economic gulf between Chicago’s downtown and its neighborhoods will continue expanding.

“Mayor Emanuel must make it clear that he is the mayor of all of Chicago, not just downtown,” said Patel.