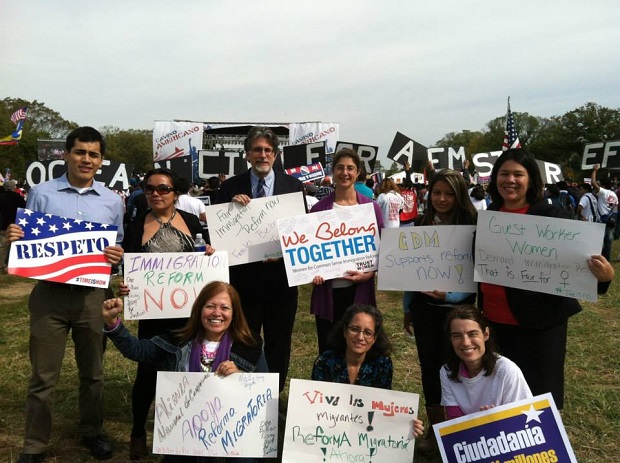 Adareli Ponce is a typical working woman in America, but her work experience is not typically "American." Even though the products of the labor of women like her are everywhere, her story is invisible to many. As the main provider for her family back in Hidalgo, Mexico, the 31-year-old has spent years slogging away in U.S. chocolate and seafood processing facilities. Migration was her chance to escape the entrenched poverty that ensnares so many young women in her hometown, who she says are often excluded from sustainable job opportunities. But the journey has been fraught with hardship and loneliness.

This week, she and a number of other women who have worked in the U.S. on "guestworker" visas went to Washington, D.C. with the bi-national labor advocacy group Centro de los Derechos del Migrante to testify about migrant women's struggles.

Because most migrant workers are men, Ponce said in her public testimony, “migrant women are commonly excluded and made invisible in debates about immigration." But they make up as much as over 40 percent of the low-wage immigrant labor force, according to some estimates, and they face gender-specific problems ranging from sexual harassment on the job to the challenges of transborder motherhood.

If migrant women are missing from the immigration debate, they are also excluded from conversations about U.S. women in the workforce, which tend to dwell on white-collar problems like the gender pay gap and the corporate "glass ceiling." Migrant women face much more basic problems: how to stave off sexual abuse and cope with long-term separation from their children, which compound issues common to migrants of all genders, like crushing poverty or heat exhaustion and toxic fumes in farm fields.

Ironically, migrant women workers have propelled opportunities for middle-class Americans. Moms who work outside of the home can better achieve work/life balance thanks to options like a migrant nanny at home or frozen seafood dinners processed by the industries fueled by migrant women's labor.

Facing double discrimination as immigrants and women, female guestworkers like Ponce risk being tracked into especially low-paid, exploitative jobs. In this racket, everyone else gets a cut: international labor recruiters who act as shady brokers of coveted visa jobs; U.S. employers who bring in these workers to serve as cheap, “disposable” labor, and big corporations like Walmart that earn fat profits at the expense of underpaid migrants in subcontracted supply chains.

As Working In These Times has reported before, many guestworkers are near-powerless to challenge bosses over labor violations. The recent case of mass wage theft of Jamaican contract cleaning workers in Florida shows how “legal” work authorization still leaves ample opportunity for employers to violate workers’ rights and, due to fears of deportation, leaves many with little legal recourse.
Women in Hidalgo generally are willing to endure the hardship of temporary work in the U.S. Ponce says, because it's still seen as a better opportunity than any job available to them in their community. Yet Ponce understands why many other migrant women work undocumented. Despite the enormous risks—including sexual violence on the migrant trail, and fraud and wage theft by employers—they are at least not legally indentured to a single employer or forced to return home after a set time.
Speaking through an interpreter during her visit to D.C., Ponce tells Working In These Times that for immigrant mothers, especially parents, the emotional pain of familial separation can rival economic hardships. "Women are the core of the family... In many Mexican homes, mother is also [taking the role of] the father of those children. [Migrant women] experience isolation of being far away from family, and on top of that they have to put up with the mistreatment that they suffer.” Ponce does not have children herself, but sends money home to support her sisters.
But the workers struggling within this system are finding ways to organize. Ponce now serves as an advocate with Centro de los Derechos del Migrante, which campaigns in both the U.S. and Mexico for immigration reform that would expand the rights of guestworkers in many low-wage industries.
The Senate immigration reform bill proposed earlier this year respoded to some of the demands of pro-migrant advocates by offering a complex scheme to allow some guestworkers and undocumented migrants an opportunity to obtain legal residency status, with the primary interest of sating labor market demand. That would give the growing population of guestworkers a pathway to settle here with their families.
At the same time, lawmakers proposed major cuts to family reunification visas, curtailing one of the few channels of legal migration outside of the guestworker system—crossing over through the sponsorship of family members already permanently settled in the U.S. The Senate would scrap reunification visas for siblings and institute a new, streamlined visa system that would score an immigrant’s eligibility based on various criteria, such as educational attainment.

Advocates are pushing for preservation of the family reunification system and a more open, humanitarian-based legalization process. Many support the bill’s provisions to expand immigrant' labor rights, including reforms to curb employer abuses of the guestworker system. But even with those reforms, perilous barriers to family reunification would remain. And for undocumented workers, the process for petitioning for legalization could take well over a decade and involve strict employment requirements and fines, which might foreclose opportunities for women to qualify—yet another gender barrier to setting here and reuniting with family. At the end of the day, whether they start out with papers or not, a workers' family could take half a generation to become whole again.

That’s too long to wait for the mothers, sisters and daughters who have for years toiled in the U.S. for their families, yet no longer know what their children look like. There’s no provision in the reform bill that resolves the pain of that longing. There are only voices like Ponce’s, which have no grand legislative solutions—just an appeal for dignity in return for all they’ve given up.