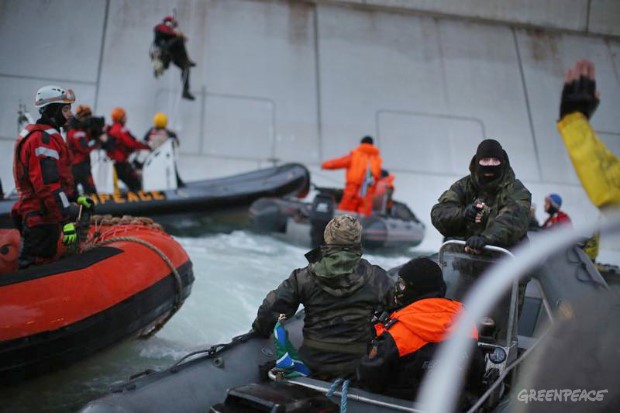 A Russian coast guard officer points a gun at a Greenpeace activist. The Arctic 30, seized while protesting drilling in the Arctic, are being detained on piracy charges. (Denis Sinyakov/Greenpeace)

Working hand-in-glove, two unions of merchant seafarers in several countries are agitating for the release of the Arctic 30, a multinational group of officers, crew, activists and journalists seized at gunpoint by the Russian coast guard on September 18. Working from the Greenpeace vessel Arctic Sunrise, the activists were protesting new oil and gas development in the Pechora Sea (an arm of the Barents Sea), an arctic region deemed environmentally sensitive by Greenpeace. International outrage over the arrest of the protestors escalated after Russian authorities charged the Arctic 30 with piracy, a crime that carries long prison terms.

“Peaceful protests and piracy are two very different things,” says Don Marcus of the Linthicum Heights, MD-based International Organization of Masters, Mates & Pilots (MM&P). “We have a problem when the officers and crew are charged with piracy as some kind of political expedient.”

In a letter dated Oct. 4 to Russian Ambassador Sergey I. Kislyak, Marcus wrote:

MM&P has intimate awareness of threat of piracy on the high seas as one of our own contracted vessels, the “Maersk Alabama” was taken hostage by Somali pirate in 2009 and held for ransom....We can assure you that the officers and crew members of the Arctic Sunrise are not pirates. To prosecute them as such is an affront to the seriousness of scourge of piracy throughout the world and an insult to the thousands of Seafarers who have been and continue to be victimized by it.

As an organization representing merchant seafarers we want to go on record expressing our grave concern with how this situation is being handled by the Russian Federation. The vessel “Arctic Sunrise” was peacefully and non-violently expressing protest. Although perhaps a frustration to your country’s government, the activities of the crew of the “Arctic Sunrise” did not fall anywhere within the realm of piracy at sea.

The 2009 hijacking of the Maersk Alabama has gained renewed attention due to the release of Captain Phillips, a Hollywood version of the story starring Tom Hanks.

Marcus also tells Working In These Times that the ship captain of the Arctic Sunrise is an American citizen and a member in good standing of the MM&P. Capt. Peter Willcox, 60, maintains his membership with the union, although the MM&P has no contractual relationship with Greenpeace, Marcus says. According to Greenpeace, Willcox is a committed environmentalist who has worked with the group for years and even served on one of its most famous protest ships, the Rainbow Warrior. That ship was famously sunk in 1985 by French intelligence officers in a New Zealand harbor as the Greenpeace crewmembers were preparing for a voyage to protest French nuclear weapons testing in South Pacific waters.

Objections to the piracy prosecutions have also been raised by Nautilus International, a labor union representing English, Dutch and Swiss merchant marine officers that has a collective bargaining agreement with Greenpeace covering all the officers in the Greenpeace fleet. Nautilus spokesperson Andrew Linington says the union has long been concerned that ship officers of all nationalities sometimes face unwarranted criminal prosecutions as a matter of political expedience in local areas. There have been numerous instances, according to the union, when ship officers are scapegoated by local authorities when oil spills or marine accidents generate public demands for action.

Nautilus General Secretary Mark Dickinson wrote to the Russian ambassador in London on September 27 in defense of the Greenpeace ship:

Nautilus believes it is highly inappropriate that the crew of the Arctic Sunrise are facing the prospect of piracy charges and believe that this belittles the seriousness of the shocking reality of piracy for seafarers today. It is generally accepted that the crime of piracy is one that involves illegal acts of violence or detention, or raids committed for private gain. We consider that exposing professional mariners and environmental protestors to such a charge is a serious misuse of a term that is widely accepted as a definition of armed robbery on the high seas.

Nautilus wishes to place on record its deep concern about this case and the treatment of our members. It is important to emphasize that the ship was involved in a peaceful and non-violent protest. We hope you will convey to your government our request for the immediate release of the ship’s crew and for any charges against them to be withdrawn.

Greenpeace spokesperson Hilde Stroot tells Working In These Times via e-mail that the Arctic Sunrise has also received support from the Maritime Union of Australia and from the International Federation of Journalists, including the Russian journalists union.

According to Stroot, Russian authorities are pressing ahead with the piracy prosecutions and none of the Arctic 30 detainees have been released on bail. Greenpeace will be stepping up its campaign to have the charges withdrawn and the prisoners released, she says.