How Young Is Too Young for Multiple-Choice Tests? (A) 5 (B) Never 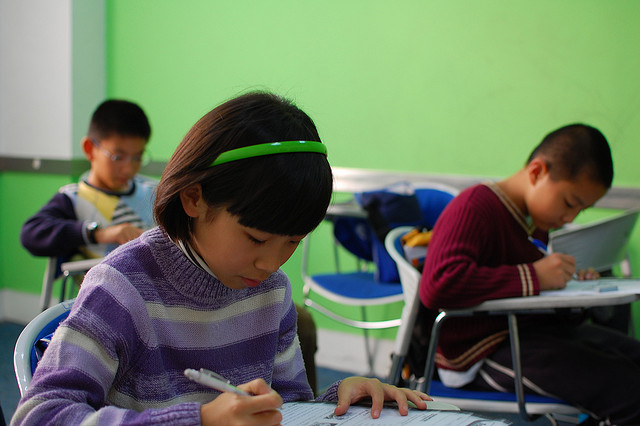 In July, I wrote about New York State's new test-based teacher evaluation system and the effects teachers worried it would have on the classroom. In addition to making it easier to fire teachers whose students don't meet some bar of “success” on standardized testing, they said, the system redesigns the classroom itself to focus on test scores at the expense of every other aspect of learning:

“For the students, this is going to be way more time spent taking assessments, in every single class they take, there will be no break from assessments,” [New York City education activist, and former public school teacher Brian] Jones says. “If we thought the testing regime was too much already, it's going to be more out of control now that you're going to have to have a test for the gym teacher, a test for the music teacher.”

That's right—even gym class, art and music will need to have a test. So will kindergarten.

“It's not like tests themselves are inherently evil. Almost every teacher gives some kind of test or assessment,” Jones says. “But when you place so much, so many outcomes on that edifice it's too much weight for that instrument to bear. It distorts and warps the whole teaching and learning process.”

Teaching, Jones noted to me at the time, is a caring profession, one that requires much more than rote drilling. He felt that the over-focus on tests threatens to remove the caring from teaching.

Now, a new report in the New York Daily News shows that those tests—already being given to kindergarteners—could be removing the caring from learning, too.

The tests, created by Pearson—a $9 billion company that made $32 million from New York's tests alone—ask young students to count the number of items in a picture and put numbers in order. But students aren’t reacting well to the new format:

Teachers said kindergartners are bewildered. “Sharing is not caring anymore; developmentally, it’s not the right thing to do,” said one Queens teacher, whose pupils kept trying to help one another on the math test she gave for the first time this fall.

“They’re scared. They just don’t understand you’re supposed to bubble in next to the answer.”

The image of 4- and 5-year-olds struggling to figure out how to take a multiple-choice test is heartbreaking enough, but the image that stuck with me was that of the children trying to help one another with the test and being told that they're not allowed to do so.

When we talk about the values that students learn from standardized testing, we often talk about incentives to cheat (for both teachers and students) as the pressure on each individual test increases, or, as Jones noted in July, the removal of creative subjects from the curriculum. Less discussed, but just as important, is the way these tests make everything into a competition—they pit children against one another instead of teaching them to share, which can turn even a kindergarten classroom into a den of hyper-individualistic bootstrappers (or as Megan Erickson wrote, “little Lebowski urban achievers”).

This is a feature, not a bug, of the testing regime. While it's always worth pointing out how big the testing business is and the identity of the people who stand to profit from its never-ending expansion, it's also important to remember that testing is an ideological practice. Just as boiling teaching down to test administration breaks the bond between teachers and students and reduces highly skilled workers to automatons that can be replaced with inexperienced and often temporary Teach for America recruits, boiling learning down to filling in bubbles and getting a good score teaches very young children that they have nothing to offer each other—that their only goal should be stomping the competition on the way to the top.