Victory for Mineworkers in Battle Against Patriot Coal and Peabody Energy 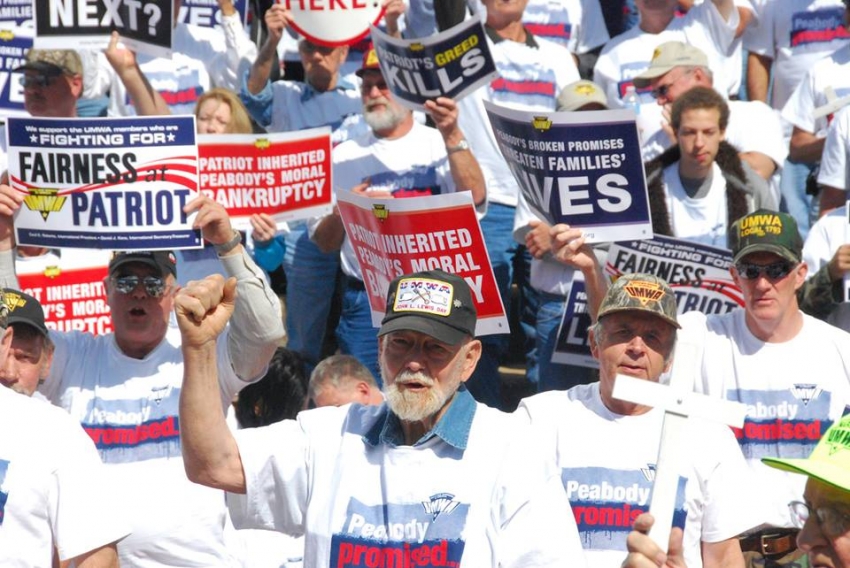 Thousands of miners and supporters gathered in front of the Henderson County (Kentucky) Courthouse on June 4, 2013, after the bankruptcy court ruled that Patriot Coal was free of its obligation to provide retiree healthcare. (United Mine Workers of America/Facebook)

Last week, the United Mine Workers of America (UMWA) announced a settlement in its long fight with Peabody Energy that will preserve healthcare benefits for thousands of retired miners. Peabody has agreed to provide more than $400 million to start a healthcare fund for the 20,000 retired miners and beneficiaries whose retirement plans had been threatened by the bankruptcy of Patriot Coal, a Peabody spin-off (as I've previously reported).

"I am very pleased that we have been able to reach this agreement with Peabody and Patriot," said UMWA International President Cecil E. Roberts in an official statement. "This is a significant amount of money that will help maintain healthcare for thousands of retirees who earned those benefits through years of labor in America's coal mines. This settlement will also help Patriot emerge from bankruptcy and continue to provide jobs for our members and thousands of others in West Virginia and Kentucky."

UMWA has contended for years that Peabody Energy created Patriot Coal to fail, as a vehicle to offload the parent company’s retiree obligations. When Peabody Energy founded Patriot Coal in 2007, Patriot assumed financial responsibility for 40 percent of Peabody’s retiree healthcare and pensions. The next year, Patriot acquired a company called Magnum Coal, itself a spin-off of mining giant Arch Coal; Magnum brought with it $500 million in Arch’s retiree obligations. Patriot ended up with a retiree-to-worker ratio of more than 3 to 1. When Patriot went bankrupt in the summer of 2012, the company successfully pressed a bankruptcy judge to eliminate retiree obligations, leaving thousands of former workers without viable safety nets.

Months of negotiations ensued between Peabody, Patriot, UMWA and an outside investment firm, Knighthead Management LLC. A deal on retiree pensions was struck earlier this year, but healthcare remained up in the air until last Wednesday, when the parties announced a multi-part deal.

Knighthead Management agreed to invest $250 million in Patriot Coal and manage its emergence from bankruptcy. Additionally, Peabody Energy will provide Patriot with a $140 million line of credit.

Most significantly, Peabody Energy will provide more than $400 million in capital to fund a Voluntary Employee Benefit Association (VEBA) plan that will now be responsible for providing retiree healthcare to Patriot’s 20,000 beneficiaries.

In exchange, UMWA has agreed to relinquish its rights to the 35 percent of Patriot Coal that it was granted as part of a deal with Patriot earlier this year. UMWA will also stop its campaign and class-action lawsuit against Peabody Energy.

Arch Coal is also named in the lawsuit, and the UMWA is also negotiating an end to the legal campaign against Arch, according to an Arch Coal press release. The miners union says it is pushing Arch Coal to contribute more money to the VEBA.

The UMWA points out that despite the $310 million for the VEBA from Peabody—as well as another $15 million from Patriot, and $60 million in royalty fees won as part of an earlier deal in August with Patriot Coal—the VEBA still is not financially secure enough to be funded into perpetuity.

UMWA spokesman Phil Smith says that bipartisan legislation currently in the House would transfer unused mine reclamation funds to the VEBA, which could maintain the current level of retiree benefits into perpetuity. UMWA is lobbying for such a bill, and Smith says that legislation could be taken up as soon as the logjam caused by the government shutdown is resolved.

"This settlement, as significant as it is, still does not provide the level of funding needed to maintain healthcare for these retirees forever," Roberts said. "That is why we are continuing our efforts to pass bipartisan legislation in Congress that will put these retirees under the Coal Act, meaning their long-term healthcare benefits would be secured at no additional cost to taxpayers.”

The settlement with Peabody must be approved by the Patriot bankruptcy court; a hearing is scheduled for November 6.