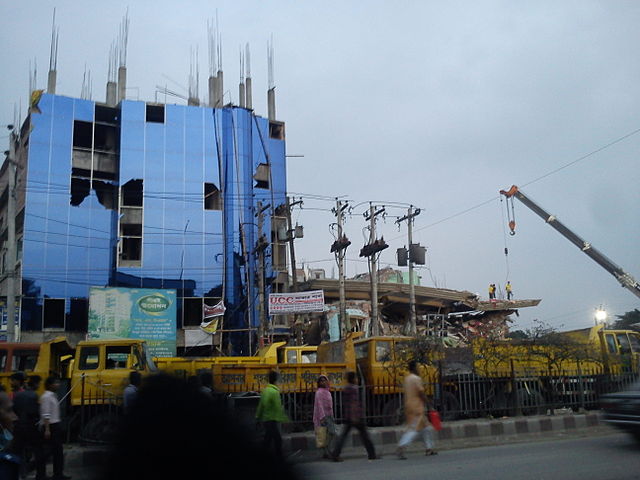 Among other things, workers still want compensation for the families of those killed in the April 24, 2013 collapse of Dhaka's Rana Plaza factory complex. (Sudipta Das/ Wikimedia Commons / Creative Commons)

Earlier this month, a group of workers at the Tuba Group garment factory in Bangladesh locked owner Delwar Hossain in his office and demanded that he pay the bonuses he’d promised them for the Eid al-Adha holiday, according to Reuters. Such extreme interventions are rare in Bangladesh, where the garment export industry is a main driver of the economy, but it was crazy enough to work: After 18 hours in captivity, the boss agreed to hand over the money. Such tactics have proven effective outside the factory walls, too, as workers in the streets resort to desperate measures to address desperate grievances.

After the collapse of the Rana Plaza factory complex, which killed more than 1,100 people in Savar, Dhaka this April, massive worker strikes erupted all over Bangladesh. Thanks to subsequently intensifying local as well as international public outcry, government officials have finally agreed to raise the minimum wage by as much as 50 to 80 percent.

The fight isn’t over yet, however. Though the workers have demanded a minimum monthly wage of 8,000 taka, or about $100 (more than double the current minimum of $38, last raised in 2010), the pending raise would likely be much less than that—perhaps raising it only to about $60, according to Reuters. That proposed level would still be less than what comparable garment workers in Cambodia typically earn, and far below what experts say would keep up with the general cost of living in Bangladesh, Factory owners and their powerful official allies in government are continuing to resist any measures that would reduce their profits from the country’s massive, $22 billion garment export industry.

Kalpona Akter, a former garment worker and now a leading activist with the Bangladesh Center for Workers Solidarity, says that if the wage hike falls far short of workers’ demands, as seems likely, the strife in the streets will persist. “If the minimum wage comes in [at] half of the figure of what workers are asking, that will escalate the situation,” she told In These Times during a visit to New York this week. Though she is confident that grassroots action can help advance the workers' cause, she worries that the political opposition may take advantage of these tensions by stoking further unrest to fuel the country’s fierce political rivalries.

Indeed, 24-year-old Dhaka factory worker Mosammat Jhumur, who joined a strike wave in September that impacted hundreds of plants, tells Reuters, "If [the minimum wage hike] is less than 8,000 taka, we have to press the government or the factory owners to increase... If we need to go on the road to demonstrate, then we will do that."

The Bangladeshi garment industry continues to face intense international scrutiny. Journalists have associated major Western brand names like The Gap with images of “death trap” sweatshops and crackdowns on labor activists. A recent report by Al Jazeera also linked The Gap to child labor in unregulated subcontractor factories in Bangladesh.

International advocacy groups are leveraging this awareness to win better factory safety standards. International Labour Organization officials and representatives of the IndustriaALL and UNI international unions are continuing to negotiate with garment companies a major compensation package for factory workers and families affected by the highly publicized Rana collapse and by a massive deadly fire last November at the Tazreen garment factory. Of all the Western companies implicated in the Rana disaster, so far only U.K.-based multinational Primark has kicked in meaningful compensation for the Rana workers and families—the equivalent of about six months’ salary for more than 3,620 workers—and that initial award was due to run out this month, but a short-term extension is now pending. Long-term compensation plans remain unclear.

In addition, the ILO and several international unions are now rolling out the Bangladesh Accord on Fire and Building Safety, which would establish an independent regulatory framework, in partnership with workers' groups, to oversee renovations of the country’s dilapidated factories. According to the latest version of the implementation plan, the signatories, who now include more than 100 brands, including Abercrombie and Fitch, and H&M, will kick in up to $500,000 per year toward the funds for carrying out the agreement, “based upon a sliding scale, relative to the individual Company’s volume of sourcing from Bangladesh.”

As companies begin to be shamed into action in the wake of the Rana catastrophe and other avoidable disasters, international solidarity is as vital as ever, says Akter. This isn’t just to help the workers in her community, she notes; the global economy has intertwined the fate of all struggling workers, from the Wal-Mart stores and warehouses in the U.S. to the Wal-Mart factories in Bangladesh.

Labor unions and grassroots groups like hers “are getting stronger” in Bangladesh, she says. But with so much consumer and corporate power concentrated in the West, she says, in the fight for meaningful international safety oversight, “if we [did] not not get international solidarity, if we would not have this pressure on the corporations, they would not sign this accord.”

Even so, major U.S. brands, including Wal-Mart and The Gap, continue to balk at the agreement, opting instead to push their own alternative, corporate-controlled accord designed to minimize the companies’ liability.

Meanwhile, factories continue to crumble. According to one recent estimate, more than half of facilities are vulnerable to collapse.

And while some companies dither, there’s still a battle to be fought in the streets. When workers held their boss hostage until he paid up, Reuters reports, S. M. Mannan, vice president of the garment-industry group Bangladesh Garment Manufacturers and Exporters Association, seemed to understand that sometimes, street justice is the only thing that workers can use to defend their rights. After the workers had resolved the issue “peacefully,” Mannan concluded, "If any owner does blunder, we cannot take responsibility for him.”

With employers, government officials, and fashion industry giants all refusing to take responsibility for the deep suffering in Bangladesh's factories, it won't be long before the patience of millions of other workers runs out as well.

Kalpona Akter of the Bangladesh Center for Workers Solidarity will be speaking at the "Echoes of Ghadar" conference in New York City on October 26, 2013. Details can be found on the conference website.