How To Save Chicago Schools? Fix the Flat Tax, Say Community Members 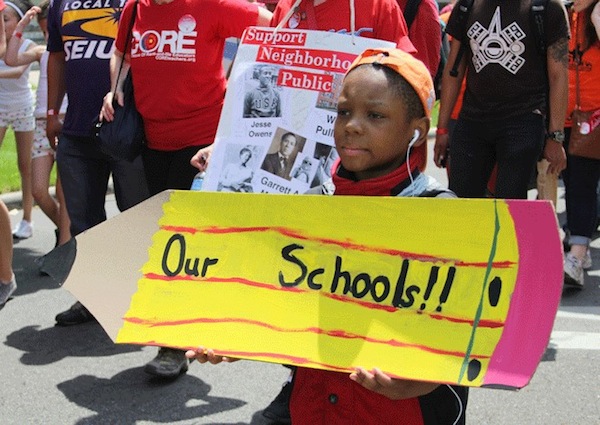 Austerity measures like school closures and teacher layoffs have set off waves of street protests over the past six months. Now, some activists are turning their attention to raising revenue. (Chicago Teachers Union Facebook)

“It’s just been a lot of chaos,” Chicago parent Wendy Katten said to an audience full of Chicago parents and students regarding the public school district’s last two years—and going forward, she adds, “The forecast is kind of gloomy.”

Few would dispute Katten’s assessment. Chicago made national headlines for a citywide teacher’s strike in September 2012 and the controversial closures of 50 schools last spring, among other upheavals.

Many parents, teachers and community activists say they are fed up with Mayor Rahm Emanuel’s austerity measures and his shifting of funds from traditional public schools to charter schools. Emanuel and Chicago Public Schools (CPS) Chief Executive Officer Barbara Byrd-Bennett, meanwhile, say that they are addressing long-festering budget problems caused by their predecessors in public office.

The situation grew worse on Tuesday, when CPS officials acknowledged that they had sent layoff notices to an additional 94 employees, due to funding shortages.

Chicago community activists disgruntled with the city’s approach met at a town hall meeting on Wednesday to develop their own strategy to improve the public schools. Raise Your Hand, a parent-led education non-profit in Chicago cofounded by Katten, called the meeting.

Speakers mostly agreed that CPS’s next crisis is its long-term finances, and that the immediate focus should be on ways to better fund neighborhood schools.

The most-discussed solution: Raise money for schools through a progressive income tax to replace Illinois’ flat tax. Currently, every resident, from Oprah Winfrey to a fast-food worker, hands over 5 percent of her yearly earnings to the state.

“A progressive income tax is a priority for the next year,” said Katten to Working In These Times after the meeting. “It’s a lever that can bring in a lot of revenue we need.”

On the heels of the 50 school closings, which were billed as a cost-saving measure, the Chicago Board of Education approved a 2013-2014 school year budget in August that included more than $100 million in cuts to neighborhood schools and 3,000 layoffs.

Emanuel and Byrd-Bennett blame the underfunded teacher pension fund. The district paid $405 million more into the fund in 2013-14 than 2012-13 due to the expiration of a so-called state “holiday” on full pension payments. Unless the state reinstates this holiday or passes legislation that cuts pension benefits, city leaders warn more cuts are on the way. Legislation that would curb public worker pension benefits has powerful supporters in the state government, including Speaker of the House Mike Madigan and Gov. Pat Quinn, both Chicago Democrats, but no vote has been scheduled.

The Chicago Teachers Union and progressive advocates have long argued that cutting teacher’s pension benefits is unfair to educators who have consistently paid into the pension system. It also may violate the state constitution, which guarantees public employees their contractually stipulated retirement benefits.

However, all sides of the Chicago education debate agree that one problem is a lack of state funding. The Land of Lincoln ranks dead last among states in per-pupil money.

A progressive state income tax with more money earmarked for the Illinois Board of Education’s per-pupil fund has emerged, then, as an alternative solution to at least partially address CPS’s financial problems. On Monday, members of the Better Illinois coalition delivered a 150,000-signature petition to state lawmakers calling for such a tax.

“A progressive tax is something that most states do,” pointed out Peter Starzynski, field director for Better Illinois, at Wednesday’s meeting. Indeed, 34 of the 41 states with an income tax require wealthier residents to pay a greater percentage of their earnings.

Emanuel and CPS officials have not taken a position on a progressive income tax. Gov. Quinn and state Senate President John Cullerton, a Chicago Democrat, support the tax change.

But the flat income tax is written into the state constitution, and an amendment requires both a 60 percent majority of state lawmakers and the governor’s approval. Then, a majority of Illinois voters would have to approve the amendment in a ballot initiative.

If they were any time that such a scenario would be conceivable, it is now. The Illinois legislature is 60 percent Democratic, and Illinois residents have spent the last five years hearing about the state’s financial crisis. “We really think there is a window of opportunity to get this done,” Starzynski said to the town hall audience. Starzynski’s goal is to have the state legislature pass the amendment in the spring and to get the measure on state ballots next November.

Another potential source of revenue for CPS is surplus money from Chicago’s Tax Increment Finance, or TIF, economic development program. Legislation in Chicago’s City Council calls for the release of what would effectively amount to about $200 million in TIF money, around half of which would go to CPS. The majority of aldermen support the measure, but Emanuel opposes it. The mayor’s budget instead proposes releasing 25 percent of the TIF surplus.

Katten told Working In These Times that there would be a "last push" to pass the TIF ordinance next week before the Chicago City Council votes on Emanuel’s proposed 2014 budget.

Non-financial issues that arose at the town hall included a presentation from Cassie Criswell about how parents can get their students to opt of some standardized testing. Criswell is founder of More than a Score Chicago, a group that believes that standardized tests are poor measures of student achievement and hurt the quality of education.

Criswell acknowledged that the district reduced in August the number of classroom hours elementary students must spend taking standardized tests. But she argued that “over-testing is still rampant” and that such tests are “misused” to judge teachers as part of the state’s teacher performance evaluation system.

Also, several attendees restated their call for the Chicago School board to be elected, instead of appointed by the mayor. Chicago is the only school district in Illinois with an appointed school board, which the teacher’s union and many other critics say makes the board a rubber stamp for the mayor’s policies.

But Rod Estvan, an education policy specialist at the disability rights group Access Living, contended that the progressive tax was the most important of the proposals on the table. “We need to work on a long-term strategy for revenue generation,” said Estvan in a presentation at the meeting, “and a big part of that strategy is to look at the income tax structure.”