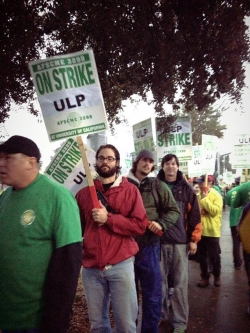 Campus workers picket at the University of California-Davis during a one-day strike on Nov. 20.   (Photo via the UC Student Workers Union - Davis)

The union representing 22,000 service workers across the University of California system went out on a one-day unfair labor practices strike this Wednesday, joined by 15,000 graduate student employees.

The action was particularly notable because of its use of a rare sympathy strike and the sight of academic workers standing in solidarity with service workers, as I reported last week.

Alongside the growing unionization efforts by adjunct professors, the graduate student solidarity strike might debunk those who believe academics will never get it together to fight the depredations of austerity on their once well-paying jobs. (Thomas Frank is one such skeptic—On the issue of higher ed's long decline, he recently wrote in The Baffler, "Despite the academy's noisy radicalism, its endangered meritocracy simply cannot summon thew will to reverse the market tide.")

Frank’s argument seems more convincing, however, when it comes to UC Berkeley professor Alexander Coward, who took it upon himself on Wednesday to cover classes usually taught by striking graduate student instructors.

In an e-mail sent to undergraduate students on the eve of Wednesday's actions, which was posted on Imgur and has since gone viral, the professor explains his reasons for not participating in the strike:

“I want to let you know that I will not be striking,” the professor writes in an e-mail to students, before continuing:

Which means that I will be, so-to-speak, crossing a picket line. Moreover, I know that two of your GSIs have decided to strike, but because I happen to be free in the afternoon when they teach, and because I enjoy teaching smaller classes from time to time and I haven’t had a chance to in awhile, I’ll be covering those sections.

Actually, the term for replacing striking workers, so to speak, is “scabbing,” as some Twitter users noted.

Then, with a pedagogical flourish reminiscent of the Dead Poets’ Society, the professor issues an inspiring reminder that we are, all of us, utterly alone in this world:

Shortly thereafter, the message launches into a long meditation on the nature of politics:

Sometimes political events reach into our lives without our invitation or control, and we have no choice but to engage with each other about politics. Many times in history this has done so with far more violence and disruption than a strike, and it is wise to be psychologically prepared for this fact. (Umm, what?)

If I’ve learned one thing about politics since I was your age, it is this: Politics, like most things in life worth thinking about, including mathematics, is very big, very complicated, and very interconnected.

In other words: It doesn’t take much to see that the problems of 35,000 workers whom you share space with every day don’t amount to a hill of beans in this crazy world, kids. Someday you’ll understand that.

Finally, the e-mail circles back to the reasons why students should attend class as usual:

Society is investing in you so that you can help solve the many challenges we are going to face in the coming decades, from profound technological challenges to helping people with the age old search for human happiness and meaning.

That is why I am not cancelling class tomorrow. Your education is really important, not just to you, but in a far broader and wider reaching way than I think any of you have yet to fully appreciate.

I too believe that the education of young people is important, which is exactly why I went on strike yesterday … I am a graduate student in the Sciences, however unlike so many others in our field, I refuse to solely focus on just my own career and education. … Disturbingly, throughout the entirety of your long and disjointed tirade, you do not once mention any of the reasons behind Wednesday’s strike, which makes me believe that you have already made a choice to focus purely on what you refer to as the “technological life”.

Reached by phone yesterday, Coward, who is in his first semester as a lecturer in the Mathematics Department, said he had intended the e-mail to students as a statement on the value of education, not a judgment on the legitimacy of the strike itself. “I can’t in any way disrespect people for acting in accordance with their conscience,” he said, noting that he had “enormous respect” for the graduate instructors who went out on strike and had also talked with strikers on the picket line to learn more about their concerns.

I think it's interesting to consider why his letter has gone viral, and what about it was appealing or interesting to so many.  Partly, I think it's just that, in the University today, there are very few spaces or times where people who occupy different roles in the University can talk together about what they are doing here and why.  Professor Coward's letter, particularly the second half of the letter, tries to talk to those in his class about what it means to be a student at this historical moment, and what the experience of being a student feels like.  I think people desire these conversations, and his letter is a contribution to conversations about learning and and the University today.

She said she objected, however, to the fact that the letter was being circulated by the university, including on the UC Alumni Facebook page, in conjunction with the strike. “The UC Public Relations wing is trying to turn Professor Coward into a national hero for having crossed a picket line,” she says.

She also responded to Coward's suggestion that students "optimize" their lives for learning:

Students can only pursue education, or ‘optimize their lives for learning’ by taking out massive loans,and Professor Coward's letter seeks to divert attention from this reality by suggesting that students have been ‘invested in’ by society. In fact, the opposite is true: students have been divested from, and are now shouldering the burden of paying for education.

She notes that AFSCME 3299 and the UAW 2865, the two unions that struck on Wednesday, stood alongside students who organized successfully to beat back a proposed 81 percent tuition hike in 2011. “If Professor Coward had considered this fact or the recent history of the University of California, he may have come to a different conclusion about whether his students' fates were tied up with the fates of campus workers,” she says.

Asked about whether the issues that AFSCME and UAW struck over were indeed unrelated to students’ education or whether they deserved the support of educators, Coward told In These Times:

As I said in the e-mail, I can’t discount the possibility that I might be wrong. Maybe if I had thought it through more, or if I had different life experiences, or if I knew more about what was going on, I might have reached a different decision. But we all have to live in such a way that when we get up in the morning and we look in the mirror, you basically like the person that you see.”

There you have it: Sometimes, instead of a diversion from education, a strike may provide a teachable moment.

Full disclosure: AFSCME and UAW are sponsors of In These Times.