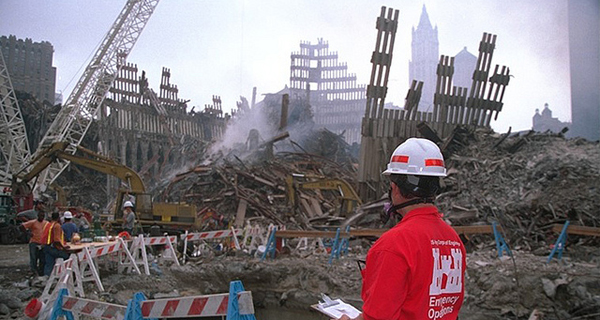 More than a decade after the attacks on the World Trade Center, cleanup workers suffering from 9/11-related illnesses are still waiting for federal compensation. (USACE / Flickr / Creative Commons)

More than twelve years after the attack on the World Trade Center, thousands of people who inhaled toxic air at the site of Ground Zero are still awaiting government help for the medical problems they've since suffered.

For years, researchers and officials have documented the environmental and health damage caused by the World Trade Center collapse, which resulted in a massive dust cloud that blanketed the city and coated the site in toxic debris and contaminants like asbestos. The health issues linked to the site range from chronic respiratory illnesses to digestive problems and various forms of cancer, and tens of thousands of people could have potentially been affected—even those who may seem fine now could develop long-term diseases down the line.

These victims include first responders, relief volunteers, neighborhood residents and local workers who were in the Ground Zero area on 9/11 and in the weeks following the disaster. But aside from a specialized healthcare program sponsored by the National Institute of Occupational Safety and Health (NIOSH), which serves more than 65,000 people, the afflicted population has generally gone without any comprehensive scheme, public or private, to pay their medical bills. Moreover, when many victims have sought relief through traditional insurance and Workers Compensation systems, they've run into seemingly arbitrary delay or denial.

To help victims and their families cope, in 2011, Congress set up a $2.8 billion compensation fund to help cover the cost for illnesses related to the attack on the World Trade Center. Although the many lawsuits brought by victims have led to legal settlements amounting to hundreds of millions of dollars, the Compensation Fund is an unprecedented effort by Congress to set up a long-term compensation system. While treatment will continue to be handled through the NIOSH program, the fund aims to offset economic damages caused by physical ailments.

But as the New York Daily News reports, of the fund's nearly 55,000 claimants, "the fund has made decisions on about 2,500 of them, deeming 871 claimants eligible." While those in charge of administering the fund wait to assess how much total claims will cost, only 112 of those 871 claimants have even received final rulings on financial awards.

John Feal, a former Ground Zero demolition worker and longtime advocate for victims, says that the tiny number of claims resolved in this first batch casts doubt on whether the the fund can meet its deadline of paying out $800 million by 2016. As someone who has struggled with medical costs after his foot was crushed on the site and has a claim still pending, Feal knows firsthand how labyrinthine the compensation plan can seem.

"This system that has been implemented to compensate those who are sick and dying from 9/11 and its aftermath—this system is flawed, it's slow, and it's broken," he tells In These Times. Advocates, including Feal, blame the slow pace on the complexity of the claims process as well as the lack of staffing.

However, according to the special master managing the fund, Sheila Birnbaum, even accounting for a rush of new claims made ahead of the early October registration deadline, the main bottleneck now comes from too many claimants not turning in all of the required paperwork.

But filing this paperwork isn't exactly a simple process, Feal points out. He says that one of the most frustrating aspects of the claims process is that workers may be required to provide proof of their illness even if they have already been approved for treatment in NIOSH’s World Trade Center Health Program. The paperwork "really, really, really stresses you to the point where you do want to give up sometimes," says Feal, noting that in many cases, the claimants "are medicated, they're worrying about putting food on the table and keeping their utilities on. And then they gotta sift through a phonebook-width stack of papers of things they have to fill out, and a lot of it's redundancy." To speed up the process, he adds, the fund should "stop asking them for the same paperwork over and over again."

Ultimately, advocates estimate that under the current criteria, considering its much-criticized bureaucracy, only about half the claims will qualify for compensation.

While the claims process drags on, Ground Zero’s environmental fallout is well into a second decade of people suffering from constant coughing, mysterious cancers and severe asthma, as well as a rising death toll. So far, more than 1,100 people with cancer have been certified for treatment under the World Trade Center Health Program, meaning that their illness was linked to the toxins around the attack site.

As In These Times has reported previously, the total potential health impacts of Ground Zero are still being researched and debated. It was only last year, after all, that a medical panel recommended that the legislation establishing the Fund, the Zadroga Act, provide compensation for certain cancers, in addition to more basic illnesses like respiratory problems. There also exists the challenge of proving a direct link between the contaminant and a victim’s cancer diagnosis. And adding to Ground Zero victims' growing outrage is the mounting scientific research showing that government officials both misled the public on the health risks that still loomed over the area after the disaster and systematically failed to provide proper safety gear to clean-up workers.

The smoking pile of debris has long been cleared from the former World Trade Center site, and the rebuilding is zooming ahead. But the tens of thousands of 9/11's remaining victims fear that once again, they'll be left in the dust.