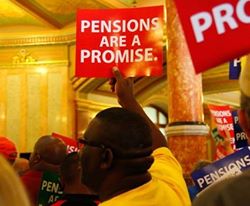 Illinois legislators, facing the deepest pension funding shortfall of any state—a gap of $100 billion and growing—voted on Tuesday to fill the hole by cutting $160 billion over the next 30 years in pension payments that the state had promised to current and future state employees. The decision by the solidly Democratic state government strongly rebuffed the public employee unions that played a major role in winning and holding a Democratic majority for the past decade.

Gov. Pat Quinn, a Democrat, called it a victory for taxpayers and, implicitly, for himself, and pledged to sign it. But in fact, Quinn, an advocate of pension “reform” without a specific proposal, played a minor role. The bill was crafted almost entirely by the powerful speaker of the Illinois House, Democrat Michael Madigan of Chicago, who fought off other proposals from legislators in both parties.

Last weekend, the top leaders in the House and Senate from both parties approved the final legislation with only modest revisions to Madigan’s original bill. Among other changes in state pension plans, it cuts cost-of-living adjustments, raises the retirement age, reduces collective bargaining rights regarding pensions, and opens the door to defined contribution (or 401k-style) plans that could weaken current plan funding and increase workers’ financial risk.

Earlier this year, Madigan refused to allow the House to vote on an alternative pension reform bill introduced by Senate president John Cullerton, a Democrat, which the Senate had approved. Cullerton’s plan, fashioned in negotiations with public employee unions, would have saved the state even more money than Madigan’s proposal. But it would have protected more of the contractual benefits of public employees. Under that plan, public employee unions, first, gave their members a choice: they could keep either their pension or medical benefits as they had been, then accept cuts in the other benefit plan (but not cuts as deep as those Madigan proposed). In order to protect their benefits, the union also proposed raising the employee contribution to the benefit fund. Their plan would have cut state health spending by roughly $130 billion over 30 years and reduced pension liabilities by $60 billion.

The $100 billion shortfall is not due to the employee pensions being extraordinarily generous, especially considering that most of the state employees—who include public university workers and teachers outside of Chicago—do not participate in Social Security. Instead, like most pension funds, they have suffered from recurring economic crises that reduced the value of their investments and income. Compounding the problem, for several decades politicians from both parties in Illinois did not properly fund the pensions. At the same time, political leaders have been afraid to tax businesses, including the financial transactions in Chicago’s futures and options markets, in order to provide much-needed revenue that could cover the gap. Union leaders, like SEIU Healthcare president Keith Kelleher, are angry with a Democratic legislature that cuts workers’ benefits while continuing to grant huge tax rebates to companies such as Archer Daniels Midland—supposedly to keep them in the state, even though Illinois gets no income tax revenue from most of its big corporations.

But Madigan would not give an inch to the arguments of unions or his Democratic colleagues in the Senate. His actions, says AFSCME Council 31 director of political and community relations John Cameron, were only “about power, about who’s in control and who makes decisions.” Madigan wields an outsized influence over many members through his informal control of much of the campaign funds for the House Democrats, and his control of the legislative process reinforces that power.

In the final vote, members of both parties split. Labor unions and allies denounced the legislation as “theft,” while right-wing groups attacked it for not showing enough “spine” in cutting pension benefits. Conservatives also wanted an end to the requirement that pension plans be properly funded, and they wanted defined benefit pensions to be replaced with defined contribution plans, similar to the private-sector 401(k) retirement plans.

Major newspaper editorialists, business-backed public policy groups (like the long-established Civic Federation), and many mainstream conservative business and political leaders supported Madigan’s pension legislation as urgently necessary, whatever its flaws. Chicago Mayor Rahm Emanuel backed the bill in principle, but he wanted to impose the same cuts on city pension funds by including them in the Madigan legislation and is likely to push next year for state legislation to do so.

Three of the four major Republican primary candidates for governor opposed the plan, offering varied reasons for doing so. The leading primary contender, ardently anti-union hedge fund billionaire Bruce Rauner, will likely gain the most from the showdown; his criticism of the bill as insufficiently draconian has led rich businessmen and the party’s ultra-conservatives wing to his side. Only Sen. Bill Brady, the 2010 Republican gubernatorial candidate and a favorite of social conservatives (who may be wary about Rauner, a moderate on social issues), voted for the pension bill.

Some political observers believe the beleaguered Quinn, often seen as a governor who can’t get much accomplished, also stands to gain politically from the passage of the pension changes under his watch. Yet nearly all of the public employee unions have grown unalterably opposed to endorsing or donating to Quinn—and possibly all Democrats who voted for the pension bill. “Their decisions to sacrifice us to the gods of the 1% leaves us in a position where it is difficult to support them on any front,” Cameron says, “particularly the governor who pledged when he ran not to support any pension plan not negotiated with labor. And I can’t imagine any of those legislators who voted for the bill who are up for election getting support of major unions.”

But Rauner is such a threat—a potential Illinois version of Wisconsin Gov. Scott Walker—that most unions will devote extraordinary efforts to defeating him, even if they don’t say a good word about the alternative, Quinn.

Whatever the election outcome next year, the courts may have the last word. The Illinois constitution clearly states that the legislature can do nothing to “diminish or impair” the pensions promised to employees. However, on the same day Illinois cut benefits, a federal court in Detroit ruled that the city could declare bankruptcy and could cut pensions, even though Michigan’s constitution prohibits such action. Although potentially a dangerous precedent for workers, the Detroit decision came in the context of bankruptcy, which Illinois does not face. And an Arizona court has upheld a constitutional protection for pension similar to that of Illinois. In the end, the elected and politically attuned Illinois Supreme Court justices—whose pensions were among those singled out for protection in the bill—will undoubtably have the final say on the constitutionality of the law. And if the political pressures are high enough, despite the straightforward shield of the state constitution, public workers may be sacrificed once again to the 1%.

AFSCME is a website sponsor of In These Times.