On National Day of Action to Reclaim Public Education, Some Chicago Politicians Get Lumps of Coal 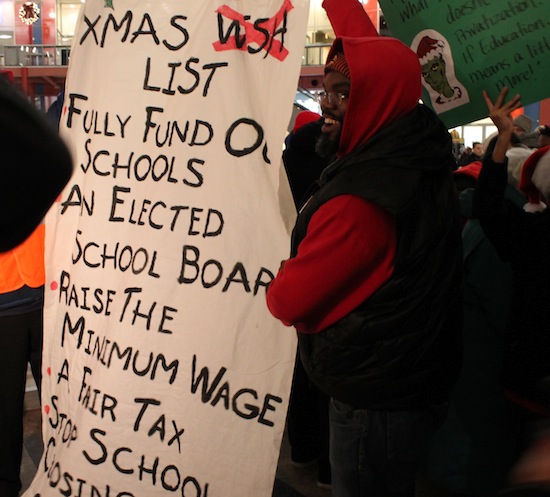 On December 9, 2013 in Chicago, Brandon Johnson of the Chicago Teachers Union holds up a Christmas list for the city schools. (Matthew Blake)

The holiday-themed shaming was part of a National Day of Action to Reclaim Public Education held by the American Federation of Teachers on December 9 in some 60 cities. The day was conceived as a way for union locals and community groups to act together on shared education goals. In New York City, for example, the call was for universal pre-kindergarten; in Houston, fairer teacher evaluations.

In Chicago, the main push was to revive the Tax Increment Finance (TIF) surplus ordinance, a union-supported school-funding bill that was shot down in the City Council last month. The bill called for about $100 million in local property tax money to be diverted from city TIF districts—where the money is used for projects selected by the mayor and local aldermen—to Chicago Public Schools, which suffered $100 million in cuts to community schools and 3,000 layoffs this summer.

The bill and the protest were backed by the Chicago Teachers Union, which raised the profile of its AFT parent in September 2012 with a seven-day teachers strike and this May with fierce opposition to Mayor Rahm Emanuel and his appointed school board closing 49 elementary schools.

Well over a year of repeated public protests have sharpened the message of CTU and its allies into a well-defined wish list of city and state legislative actions. In addition to the TIF bill, these include moving the state of Illinois to a progressive income tax from its current flat tax in order to improve Illinois’ per-pupil funding, which is currently the lowest in the nation. Also, CTU has called for an elected instead of appointed Chicago school board and a moratorium on charter school expansion.

CTU organizers presented these ideas Monday on giant posters and on one-page fact sheets hand-delivered to aides of Mayor Emanuel and Gov. Pat Quinn in their downtown offices.

Brunson and a few dozen advocates proceeded to march into City Hall and deliver candy canes to Alderman Robert Fioretti of the 2nd Ward, the sponsor of the TIF bill, and Alderman John Arena of the 45th Ward, author of a bill pushing an elected school board in Chicago.

Then CTU members distributed lumps of coal to city legislative officials who had the misfortune of being present when protesters arrived. Two officials glumly collected lumps of coal intended for aldermen who did not want to vote on the TIF bill.

Chicago aldermen, often accused of being Emanuel's lapdogs, voted 38-11 last month against putting the TIF ordinance to a vote. Emanuel indicated opposition to the TIF surplus ordinance and diverted a more modest $24 million in TIF money to CPS this year.

The use of TIF dollars to subsidize private projects, such as a new stadium for the DePaul University basketball team, has become a flashpoint of controversy over the last few years. “We need to redirect that money the right way—to our public schools,” Fioretti tells Working In These Times.

When aldermen voted against considering the ordinance, many voiced frustration with Fioretti for using a parliamentary maneuver to consider the matter after it had languished in committee. Alderman Patrick O’Connor (40th Ward), Emanuel’s floor leader, warned of a return to the “Council Wars" of the '80s, when black Mayor Harold Washington perpetually feuded with powerful white aldermen.

Asked if the lumps of coal might cause further divisions with his colleagues, Fioretti replied that aldermen “who do the mayor’s bidding … need to face some accountability.”

The alderman added that he supported the day of action, because making his colleagues publicly accountable will eventually push them to challenge Emanuel’s education policies.  “The coals are going to keep the winds of change burning here,” Fioretti said. “We are going to see change.”

Jitu Brown, an education organizer at the Kenwood Oakland Community Organization on the city’s South Side, said that Monday’s event was part of a strategy toward long-term change.

“It’s not about doing action and then by magic conditions change,” Brown told Working In These Times outside of City Hall. “We’re setting the tone change by having parents, teachers and communities come together around a common set of principles. It’s a marathon, not a sprint.”