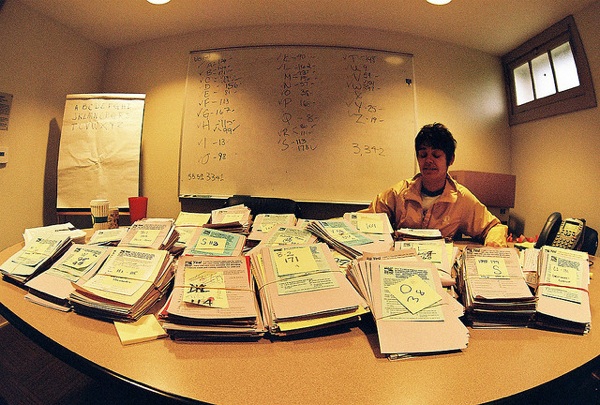 In the 'card check' process, one type of neutrality agreement, an employer agrees to recognize a union if a majority of workers sign union cards. (Old Sarge/Flickr/Creative Commons)

Unions dodged a bullet today when the Supreme Court took the unusual step of dismissing the strange and possibly disastrous case of Mulhall v. Unite Here Local 355 as “improvidently granted.”

Though the dismissal leaves some bad law in place in the 11th Circuit Court of Appeals, which includes Florida, Alabama and Georgia, labor should nonetheless breathe a sigh of relief.

In Mulhall, a Florida casino employee backed by the anti-union National Right to Work Legal Defense Foundation (NRTW) argued that neutrality agreements violate an anti-bribery provision in the Taft Hartley Act of 1947 and therefore constitute a federal crime.

Making neutrality agreements a crime would have struck at the heart of organizing as it is practiced today. The neutrality approach—in which the employer agrees not to oppose an organizing campaign—has been the mode of choice in most union drives since the ‘90s. The employer usually further promises to “card check,” which means that it will recognize the union if a majority of the employees sign cards stating their desire for union representation.

The NRTW’s argument against this process had been made before, but no federal court had ever bought it. Until 2012, that is, when, in a messy case that bounced between the court and arbitration, the 11th Circuit held that neutrality agreements could in some instances violate Section 302 of the Taft Hartley Act, which prohibits the bribing of union officials.

Although this was a bad ruling, letting it stand would have been less dangerous than the approach Unite Here took—appealing it to the Supreme Court and giving them the chance to invalidate neutrality agreements entirely. Though incorrectly reasoned, the 11th Circuit decision did not end neutrality agreements as we know them. The precedent may have caused some problems for unions in the 11th Circuit by scaring some potentially cooperative employers into demanding NLRB elections, by inviting additional lawsuits from the NRTW (which uses “strategic litigation” to “eliminate coercive union power and compulsory unionism abuses"), or by posing a possible danger in the hands of a future, zealous Republican U.S. Attorney in Florida, Alabama and Georgia. However, the case did not pose an immediate threat that warranted bringing this case before the Supreme Court—a court that has been found to be the most pro-business Supreme Court since World War II.

Indeed, during oral arguments, several of the justices appeared sympathetic to the NRTW’s bizarre vision for labor-management relations. According to the NRTW attorney, even though the National Labor Relations Act was explicitly passed to promote peace between labor and management, it should be interpreted such that it would be a criminal act for an employer to do anything that might benefit the union—even if it does so unilaterally. This includes a promise of neutrality, an agreement to allow card check, an allowance to enter the workplace, or any other action that the union could value. The attorney further argued that since these actions were made illegal under the Taft Hartley Act, the National Labor Relations Board should lose the ability to rule on them, thereby stripping away some of the Board’s jurisdiction.

Though Justice Kennedy challenged the NRTW attorney, suggesting that the position was “contrary to years of settled practices and understandings,” questions at oral arguments and previous opinions indicate that four of the justices would be open to the NRTW's interpretation. Had the case been decided on its merits, it is possible that the court would have adopted NRTW’s cynical vision of labor law.

Luckily, the case was dismissed without ruling on its merits, and it will now return to the district court. Such dismissals are relatively rare. Only 16 cases have been so dismissed since John Roberts became the Chief Justice in 2005, with three of those dismissals happening just this year, two of which were labor and employment cases. (The frequency may indicate that something is falling apart in the process of granting appeals to the Supreme Court.)

However, the case may not be dead yet. In their dissent, three liberal justices (Stephen Breyer, Sonia Sotomayor and Elena Kagan) invited a new challenge to Section 302 of the Taft Hartley Act. The justices intimated that it may be time for the Court to reexamine its previous position in a 1962 case called Sinclair Refining. A reversal of the Sinclair Refining ruling would render unnecessary much of the inquiry over whether neutrality agreements could be considered a bribe, because individuals would not have standing to bring suit.

But a Supreme Court reconsideration of Sinclair Refining could also put all neutrality agreements at risk.

In order to get a case before the Supreme Court, four justices have to be willing to hear it. In this dissent, three have signaled their willingness to hear a challenge to Section 302. Hopefully, labor will keep this issue far away from the Supreme Court until the current balance changes. As Justice Ginsburg noted in oral arguments, the neutrality agreement at issue in this case expired at least a year ago, and there was no union election or recognition. Labor should take a quiet victory at the district court level and let this case die.