Advice for Young Women: Get a Union Job 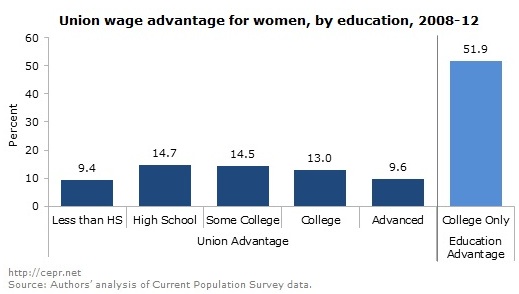 Back in the days before modern feminism, a young woman looking for work might typically be advised, politely, to “learn a trade,” with the implication that she wasn't bound for college or an elite career, but a humbler job as, say, a secretary or seamstress. Such a phrase might sound condescending today. Yet working in a trade might still be sound career goal for a woman, if she gets the right kind of job—in a union.

According to a new paper on women and unionization by progressive think tank the Center for Economic and Policy Research (CEPR), "Even after controlling for factors such as age, race, industry, educational attainment and state of residence, the data show a substantial boost in pay and benefits for female workers in unions relative to their non-union counterparts. The effect is particularly strong for women with lower levels of formal education."

Of course, unions are good for men, too. Across the unionized workforce—which includes higher-paying, male-dominated sectors like construction—men actually see a bigger wage boost from union membership than women do. But for women, who still face a gendered pay gap, the gains that unions provide can be critical. CEPR notes, "All else equal, being in a union raises a woman's pay as much as a full year of college does."

The study concludes, “Considering the great boost to pay and benefits that unions bring, it’s important that anyone who cares about the well-being of women workers also care about unions.”

Even though it materially enhances many aspects of their working lives, the value of union membership for women tends to get overlooked. Media narratives and neoliberal feminist advice tracts like Sheryl Sandberg's Lean In tend to stress higher education, networking and climbing the corporate ladder as ways for women to get ahead. But the report's findings suggest that “good union work”—an idea that’s culturally more associated with rough-hewn longshoremen than single moms—may be an overlooked path to social advancement for women.

This doesn’t mean young women should ditch their textbooks and put on a hard hat. Contrary to stereotypes, unions and professional careers that require an education go hand in hand. Public sector professions with high concentrations of women, such as teachers, have strong rates of unionization—which is part of the reason women’s share of the union workforce has grown since the 1980s, despite a decline in the overall unionization rate.

According to CEPR, the union advantage helps even professionals with college degrees, such as teachers and nurses. Among women with bachelor’s and post-graduate degrees, union wages are about 13 and 10 percent more than their non-union counterparts, respectively.

Still, the biggest boost, nearly 15 percent, is for those with just a high school-level education. And the fact is that not every young woman will go to college. National Public Radio recently reported that in a national poll, 40 percent of parents expressed concern that students who are not college-bound are not adequately prepared “to enter the job market when they leave school.” For parents of girls, the rate of concern was even higher, about 50 percent. For women who don’t go to college, out of choice or necessity, getting a union job can dramatically change their long-term prospects in a precarious and sharply unequal economic landscape.

Clearly, all students should be able to pursue whatever path they desire, whether it’s a college degree or jumping straight into the job market from high school. But for those who are off the college track, especially girls, a union track may be their best, and perhaps only, hope for a sustainable career. And even those who do go to college may not find a “high skill” professional job right after graduation—just ask the ever-growing surplus army of unpaid interns across the country.

And here’s where modern feminism and labor and the struggles of working-class communities converge. For the girl who is shut out of the corporate bourgeois have-it-all vision of the Lean In class of women, a different kind of feminism is needed. The labor movement and the feminist movement are more closely entwined than you’d think from looking at the mainstream models of female empowerment, which feature power suits, MBAs and ruthless individualism, not collective bargaining, picket lines and organizing drives. Faced with evidence that good union jobs in skilled trades can greatly improve the prospects of young women, feminists ought to recognize that when unions penetrate and mobilize marginalized service sectors, they are shielding some of the poorest women against corporate greed and neoliberal social policy.

Throughout the recession and the anemic “recovery,” masses of women have been sucked into fast food and retail jobs. Paradoxically, even as organized labor is skewing toward women—they will comprise a majority of union workers by 2023—women workers in dead-end, non-union jobs are disproportionately impacted by the economic crisis. Those trends are now entwining to drive change, however, as women workers fuel grassroots organizing campaigns for fast-food and Walmart workers, demanding a living wage and a union representation in jobs dominated by women.

According to Nicole Woo, CEPR’s director of domestic policy, for the most marginalized groups of workers, “skills and education will get workers only so far. The larger context of growing inequality, of which the drop in unionization is a big factor, prevents large swaths of the workforce from achieving economic security.” The CEPR’s data shows that “even those workers who do everything right—getting more education and skills—[often] still find themselves with low wages and lacking benefits.”

Whether they’re soldering on an assembly line or educating the next generation of young professionals or rallying in the street for a decent contract, union women are everywhere, and it’s high time that they are recognized for what they, and their unions, deliver to the economy.